Categories Menu
Home » DEVELOPMENT AND VALIDATION OF A NEW RP-HPLC METHOD FOR SIMULTANEOUS DETERMINATION OF ANTIRETROVIRAL DRUGS: COBICISTAT AND ELVITEGRAVIR

DEVELOPMENT AND VALIDATION OF A NEW RP-HPLC METHOD FOR SIMULTANEOUS DETERMINATION OF ANTIRETROVIRAL DRUGS: COBICISTAT AND ELVITEGRAVIR

DEVELOPMENT AND VALIDATION OF A NEW RP-HPLC METHOD FOR SIMULTANEOUS DETERMINATION OF ANTIRETROVIRAL DRUGS: COBICISTAT AND ELVITEGRAVIR

ABSTRACT: A simple, precise, rapid and accurate reverse phase HPLC method was developed for the simultaneous estimation of cobicistat and elvitegravir in the pharmaceutical dosage form. A column of ODS (250mm 4.6mm; i.d and 5µ particle size) was used along with the mobile phase comprising of 0.02M dipotassium hydrogen orthophosphate buffer (pH adjusted to 3.3) and methanol in the ratio of 80:20 (v/v). The flow rate was maintained at 1.0 ml/min and the effluents monitored at 254 nm. The retention time for cobicistat was found to be 2.58 ± 0.3 min and elvitegravir was 3.71 ± 0.3 min. The detection concentration was linear over 125-750 µg/ml for cobicistat and 12.5-75 µg/ml for elvitegravir. Regression equations of cobicistat and elvitegravir were found to be y = 25883x + 19711 and y = 27696x + 6046 respectively with regression co-efficient 0.999. The % RSD for Intra and Inter day precision was < 2%. The accuracy of method was validated by recovery studies and found to be significant within acceptable range 98-102%. The developed method was successfully validated in accordance with ICH guidelines. The present study demonstrates the applicability of chromatographic method to develop a new, sensitive, single RP-HPLC method for the simultaneous quantitative determination of cobicistat and elvitegravir in fixed pharmaceutical dosage form. Hence, this method can be conveniently adopted for routine analysis in quality control laboratories. 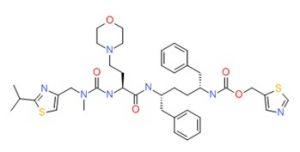 It has a molecular formula of C40H53N7O5S2 and a molecular weight of 776.0 g/mol Fig. 1. It is a mechanism-based inhibitor of cytochrome P450 3A (CYP3A) isoforms. Cobicistat does not have any anti-HIV activity on its own. It is a new pharmacokinetic enhancer, metabolized by CYP3A and especially used to increase elvitegravir levels when administered.

Elvitegravir is chemically 6-(3-chloro-2- fluorobenzyl) -1- [(2S) -1-hydroxy-3-methyl butan -2- yl] -7-methoxy -4- oxo-1, 4 dihydro quinoline -3- carboxylic acid. It has a molecular formula of C23H23ClFNO5 and a molecular weight of 447.883 g/mol Fig. 2. Elvitegravir inhibits the strand transfer activity of HIV-1 integrase (integrase strand transfer inhibitor; INSTI), an HIV-1 encoded enzyme that is required for viral replication. Inhibition of integrase prevents the integration of HIV-1 DNA into host genomic DNA, blocking the formation of the HIV-1 provirus and propagation of the viral infection 3-5. 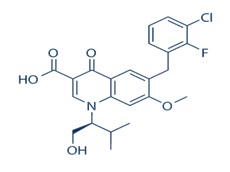 Various HPLC and HPTLC methods were reported in the literature for the estimation of cobicistat and elvitegravir individually 6-8, simultaneously 9-10 and other antiretroviral drugs 10-20. The present method is novel and was successfully validated in accordance with ICH guidelines 21. The results of the study showed that the proposed RP-HPLC method is useful for the routine simultaneous determination of cobicistat and elvitegravir in the pharmaceutical dosage form.

Instruments: Quantitative HPLC was performed on Waters Alliance 2695 separations module is a high performance liquid chromatographic system with a quaternary, low-pressure mixing pump and inline vacuum degassing powered with   Empower-2 Software. An ODC column of 250mm 4.6mm: i.d and 5µ particle size was used. PG Instruments T60 with special bandwidth of 2 mm and 10 mm and matched quartz was be used for UV measurements.

Selection of UV Wavelength: The sensitivity of the method that uses UV-Visible detector depends upon the proper selection of wavelengths. An ideal wavelength is that gives maximum absorbance and good response for both the drugs to be detected.

FIG. 3: OVER LINE SPECTRUM OF COBICISTAT AND ELVITEGRAVIR

Preparation of Standard Solution: Accurately weighed and transferred 50 mg of cobicistat and 5 mg of elvitegravir working Standards into 10 ml clean dry volumetric flasks, added 3/4 ml of diluent, sonicated for 5 min and makeup to the final volume with diluents. 1 ml each from the above two stock solutions was taken into a 10 ml volumetric flask, made up to the mark to obtain the final concentration of 500 µg/ml of cobicistat and 50 µg/ml of elvitegravir respectively.

Preparation of Working Standard: Twenty tablets of cobicistat and two tablets of elvitegravir were accurately weighed, the average weight of tablets were found and crushed to a fine powder. From the triturate of tablets, an amount equivalent to 2500 mg of cobicistat and 250 mg of elvitegravir were weighed and transferred into 100ml volumetric flask and make up to the mark with diluent. The solution was sonicated for 25 min and filtered through Whatman filter paper no. 41. From both the solutions pipette out 0.2 ml each, transfer into a 10 ml volumetric flask, made up to the mark with diluent to obtain final concentration of 500 µg/ml of cobicistat and 50 µg/ml of elvitegravir working standards.

Preparation of Mobile Phase: Prepare a mixture of 80 ml buffer and 20 ml methanol, degas in an ultrasonic water bath for 5 min. Then this solution is filtered through 0.45 µ filter under vacuum filtration. The mobile phase is used as diluent.

Preparation of Buffer (0.01 KH2PO4): Accurately weigh 1.36 gm of Potassium di-hydrogen orthophosphate in a 1000ml of volumetric flask, add about 900 ml of Milli-Q water and degas to sonicate. Finally, make up the volume with water and pH adjusted to 3.3 with orthophosphoric acid solution.

Analytical Method Validation: The HPLC method was validated according to the International Conference on Harmonization (ICH) guidelines (2005) 21. The following characteristics were considered for validation: specificity, linearity, range, accuracy, precision, LOD, LOQ, and robustness.

The specificity was evaluated by comparing the representative chromatograms of samples containing possible interfering substances and samples containing cobicistat and elvitegravir. Linearity was determined from the plot peak area vs. concentration for the six concentrations of cobicistat and elvitegravir. The regression equation and regression coefficient were calculated using least square methodology.

Precision is of two types: repeatability or intra-day variability and intermediate precision or inter-day variability. The intraday precession was testing for six different solutions of cobicistat and elvitegravir on the same day. Inter day precision tested by analyzing solutions of both drugs six times on different days. The results were reported as % RSD.

The LOD and LOQ were determined from the specific calibration curve obtained using six standard solutions that were the closest to the LOQ.

Robustness was evaluated by deliberately varying the temperature of the analytical column, the flow rate, and by using similar columns.

Linearity: The linearity of an analytical procedure is its ability (within a given range) to obtain test results that are directly proportional to the concentration of the analyte in the sample. A value of correlation coefficient (r2) > 0.998 is considered as the evidence of an acceptance of the data to the regression line. Serial dilutions of cobicistat (125-750 µg/ml) and elvitegravir (12.5-75 µg/ml) were injected into the column and detected at a wavelength set at 254 nm Table 2. The calibration curve was obtained by plotting the concentration vs. peak area Fig. 6, 7. 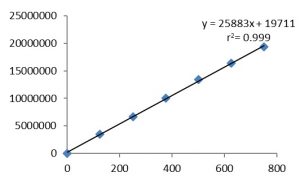 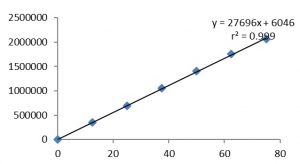 Assay Studies: Six homogeneous samples of both samples and standards were injected. The percentage assay of the drugs in the formulation was estimated. The average % assay was calculated and found to be 99.87% and 100.16% for cobicistat and elvitegravir respectively Fig. 8. The assay data were tabulated in Table 3.

Interday precision was performed with 24 h time lag and the % RSD obtained for cobicistat and elvitegravir were 1.92% and 1.76% Table 4.

Intraday Precision Studies (Repeatability): Interday precision was performed and % RSD for cobicistat and elvitegravir were found to be 0.66% and 0.56% respectively Table 5.

Recovery: Three different concentrations (50%, 100%, 150%) of cobicistat and elvitegravir were injected in a triplicate manner and amount recovered, and percentage recovery were tabulated in Table 6.

ҏ= the standard deviation of the response *

S = Slope of the calibration curve

LOD for Cobicistat and Elvitegravir were found to be 2.51 µg/ml and 0.72 µg/ml respectively Table 7.

Robustness: The robustness of an analytical procedure is a measure of its capacity to remain unaffected by small but deliberate variations in method parameters and provides an indication of its reliability during normal usage.

For the determination of a method’s robustness, deliberate change in the Flow rate was made to evaluate the impact on the method. Small deliberate changes in a method like Flow rate, mobile phase ratio, and temperature are made but there were no recognized changes in the result and are within range as per ICH Guidelines Table 9, 10.

CONCLUSION: From the typical chromatogram of drugs, it is shown that the retention time for cobicistat is 2.58 min and elvitegravir is 3.71min. The mobile phase comprises of 0.02M di-potassium hydrogen orthophosphate buffer (pH adjusted to 3.3) and methanol in the ratio of 80:20 (v/v). The flow rate was 1.0 ml/min and the effluents were monitored at 254 nm. Over 1.0 ml/min gradient mode of separation, which was found to be most suitable to obtain a peak well defined and free from tailing.

In the present developed HPLC method, the standard and sample preparation required less time and no tedious extraction was involved. A good linear relationship (r2=0.999) was observed between the concentration range of 125-750 µg/ml for cobicistat and 12.5-75 µg/ml for elvitegravir. Low values of standard deviation are indicative of the high precision of the method.

The percentage assay of Cobicistat is 99.87%, and Elvitegravir is 100.16%. The absence of additional peaks in the chromatogram indicates non-interference of the common excipients used in the formulation. The limit of detection (LOD) and limit of quantification (LOQ) for cobicistat were found to be 2.51 µg/ml and 7.62 µg/ml; for elvitegravir were 0.72 µg/ml and 2.18 µg/ml respectively.

This demonstrates that the developed HPLC method is simple, linear, accurate, sensitive and reproducible. Thus, the developed method can be easily used for the routine quality control of the pharmaceutical dosage form of the drugs within a short analysis time.