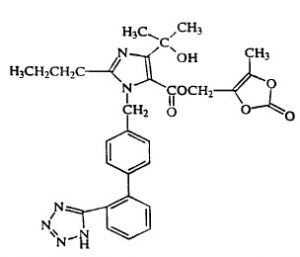 Apparatus and chromatographic condition: The chromatographic separation was performed on a Shimadzu HPLC Promoinence series, integrated with PDA (Photo Diode Array) detector. The analytical Grace Smart C18 column (25cm x 4.6mm i.e., 5 µm) was used for the separation. The mobile phase consisted of acetonitrile and triethylamine buffer (consisting of 5ml triethylamine in 1000 ml distilled water adjusted to pH 2.7) in a ratio of 70:30 (v/v). The mobile phase was prepared freshly, filtered, sonicated before use and delivered at a flow rate of 2 ml/min and the detector wavelength was set at 256 nm. The injection volume was 20 µl.

Analysis of Tablet Formulation: Ten tablets were weighed accurately and powdered. Powder equivalent to 100 mg OLM and 125 mg HCT was weighed and transferred to a 100 mL volumetric flask. It was dissolved in 60 mL mobile phase by shaking the flask for 15 min and sonicated for 3 minutes. Then the volume was adjusted up to the mark with the same solvent and mixed well. Then it was first filtered through a 0.45μm whatman filter paper and then with 0.2µ disk filter. A final concentration of 20 μg/mL of OLM and μg/mL of HCT were prepared and concentrations of the OLM and HCT were calculated from the calibration graph.

Recovery: Five different samples of known concentration ranging from 4-40 μg/mL for OLM and 5-50 μg/mL for HCT were prepared and these are analyzed against standard solution. The result of recovery analysis of olmesartan medoxomil and hydrochlorothiazide were found to be in the range of 99.25-100.46% and 99.31-102.13% respectively reported in Table 1.

Sensitivity: The Limit of Detection (LOD) was determined as lowest concentration giving response and Limit of Quantification (LOQ) was determined as the lowest concentration analyzed with accuracy method were determined by injecting progressively low concentrations of the standard solutions using the developed RP-HPLC method. The limit of detection (LOD) and limit of quantification (LOQ) were found to be 103.68 ng/ml and 345.6 ng/ml for OML and 38.592 ng/ml and 120.064 ng/ml for HCT (Table 1). The LOD and LOQ showed that the method is sensitive for OLM and HCT.

System suitability test: The specificity of this method was determined by complete separation of OLM and HCT as shown in Fig. 3 with parameters like retention time, resolution and tailing factor (Table 1). Here tailing factor for peaks of OLM and HCT was less than 2% and resolution was satisfactory. The average retention time ± standard deviation for OLM and HCT were found to be 7.911±0.004 and 1.939±0.005 respectively, for five replicates. The peaks obtained for OLM and HCT were sharp and have clear baseline separation. Analysis were also performed for active OLM & HCT, placebo (All the ingredients except active OLM & HCT) and sample both stressed (at 105°C for 24hr) and unstressed condition. After analysis it was found that there is no interference of peak in the Olmesartan medoxomil & Hydrochlorothiazide region for the stressed sample, Placebo & Active. Hence the developed method was specific for the analysis of this product.

Ruggedness and Robustness: Ruggedness test was determined between two analysts, instruments and columns. Robustness of the method was determined by small deliberate changes in flow rate, mobile phase pH and mobile phase ratio. The content of the drug was not adversely affected by these changes as evident from the low value of relative standard deviation indicating that the method was rugged and robust.

Stability: In order to demonstrate the stability of both standard and sample solutions during analysis, both solutions were analyzed over a period of 24 h at room temperature. The results show that for both solutions, the retention time and peak area of HCT and OLM remained almost similar (% R.S.D. less than 2.0) and no significant degradation within the indicated period, thus indicated that both solutions were stable for at least 24 h, which was sufficient to complete the whole analytical process.

CONCLUSION: The developed HPLC method is simple, precise, specific and accurate and the statistical analysis proved that method is reproducible and selective for the analysis of olmesartan medoxomil and hydrochlorothiazide in a combined tablet dosage form.