ABSTRACT:An accurate, precise, specific and rapid RP-HPLC method was developed and subsequently validated for the determination of Dapagliflogin in API. Better separation of the drug was achieved on BDS column (250×4.5mm, 5µ) with a mobile phase consisting of a mixture of ortho phosphoric acid and acetonitrile (45:55 v/v) at a flow rate of 1ml/min, with detection at 245nm using Photo Diode Array (PDA) detector. The developed method was validated for different parameters such as linearity, accuracy, precision, limit of detection(LOD), limit of Quantitation (LOQ), robustness and the results were found to be within the limits according to ICH (International Conference on Harmonization) guidelines. The retention time was found to be 2.963 min. The method was found to be linear in the range of 25-150µg/ml with a correlation coefficient (r2) of 0.999. The LOD and LOQ of the method were calculated to be 0.6 and 1.8µg/ml respectively. The Precision was estimated by employing repeatability; intra-day and inter-day studies and the results were calculated as %RSD values and were found to be within the limits. The average recovery of the analyte was found to be 99.8% which confirms the accuracy of the method.

Literature survey of the drug revealed that the drug was estimated by LC-MS/MS method in biological fluids 2. And the pharmacologic action of the drug was estimated 2-10. But there were no methods for the determination of Dapagliflozin in API by RP-HPLC.  Hence the aim of present work was to develop and validate an accurate, precise, linear, robust and rapid method for the estimation of Dapagliflozin API.

The analysis was performed on Waters HPLC (with a software Empower 2), fitted with a gradient pumpPDA detector and BDS (250×4.6mm, 5µ) column which is maintained at an ambient temperature. The optimized mobile phase composition was ortho phosphoric acid and acetonitrile (45:55). The mobile phase was run at a flow rate of 1ml/min. The injection volume was 10µl. The chromatographic run time was adjusted as 6min. The wavelength of the detector was set at 245nm for the analysis of the drug.

The optimized mobile phase consists of a mixture of buffer (ortho phosphoric acid) and Acetonitrile in the ratio of 45:55 v/v.

The drug was first dissolved in methanol and further dilutions were made using water.

Accurately weighed 10mg of Dapagliflozin was taken in a 10ml standard volumetric flask and dissolved in few ml of methanol. Then the volume was made up to the mark with methanol. From the above solution, 1ml was diluted to 10 ml with water to get a concentration of 100µg/ml of Dapagliflozin.

Method validation: The developed method was validated for linearity, accuracy, precision, and Limit of Detection, Limit of Quantitation, robustness and system suitability parameters as described in ICH guidelines.

From the stock solution, 25, 50, 75, 100, 125, 150µg/ml solutions were made and their chromatograms were recorded. From the recorded chromatograms, their respective mean peak areas were calculated and the linearity plot was constructed using the mean peak areas at their respective concentrations. The correlation coefficient was found to be 0.999. The linearity data of Dapagliflozin was shown in Table 1 and the calibration plot was shown in Figure 2. 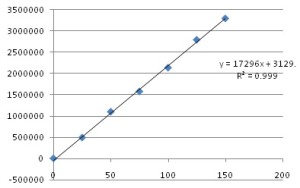 Accuracy of the method was determined by calculating the % recovery of Dapagliflozin by the method of standard addition (standard stock solution spiked into the placebo). The results of recovery studies were recorded in Table 2.

Precision: The precision of the method was evaluated by carrying repeatability in the same day (intra-day) and inter-day precision studies. The percentage relative standard deviation (%RSD) of each study was calculated and was found to be less than 2% showing the method was precise. The results of intra-day and inter-day studies were shown in Table 3.

LOD and LOQ: Limit of Detection (LOD) and Limit of Quantitation (LOQ) of the method were found to be 0.6µg/ml and 1.81µg/ml respectively.

Robustness of the method was determined by slightly changing the flow rate, temperature and mobile phase composition from the optimized chromatographic conditions. The results were shown in Table 4.

The chromatogram of Dapagliflozin standard was shown in Figure 3. And the optimized chromatographic conditions were shown in Table 6. 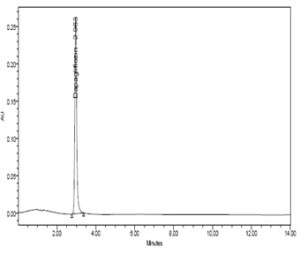 CONCLUSIONS: In the present study, we have developed a new, rapid RP-HPLC Method and the was validated for different parameters (linearity, accuracy, precision, LOD, LOQ, Robustness and system suitability. By studying all these validation parameters we have concluded that the method was linear, accurate, precise, robust and rapid for the determination of Dapagliflozin in API. Hence the method can be successfully applied for the estimation of Dapagliflozin in API.