ABSTRACT: The present study was undertaken to develop and validate a simple, accurate, precise, reproducible and cost effective UV-Visible spectrophotometric method for the estimation of levofloxacin in bulk and pharmaceutical formulation. The solvent used throughout the experiment was 0.1N NaOH. Absorption maximum (λmax) of the drug was found to be 288 nm. The quantitative determination of the drug was carried out at 288 nm and Beer’s law was obeyed in the range of 2-12μg/mL. The method was shown linear in the mentioned concentrations having line equation y = 0.0704x + 0.0034 with correlation coefficient R2of 0.999. The recovery values for levofloxacin ranged from 99.92% - 100.33%. The relative standard deviation of six replicates of assay was less than 2%.The percent relative standard deviation (RSD %) of interday precision range was 0.469 – 0.925 % and intraday precision range was 0.685 – 0.713%. The limit of detection and limit of quantification was 0.087μg/mL and 0.164μg/mL. The percent relative standard deviation of robustness and ruggedness of the method was 0.136 - 0.213%. Hence, proposed method was precise, accurate and cost effective. This method could be applicable for quantitative determination of the bulk drug as well as dosage formulation.

INTRODUCTION:Levofloxacin is a broad spectrum second generation fluoroquinolone antibacterial agent, structurally related to nalidixic acid 1. Its spectrum of activity includes most strains of bacterial pathogens responsible for respiratory, urinary tract, gastrointestinal, and abdominal infections, including gram negative, gram positive and some atypical bacterial pathogens 2-9. Levofloxacin stops multiplication of bacteria by preventing the reproduction and repair of their genetic material 10.

Literature survey revealed that few analytical methods are available for the individual estimation of levofloxacin by HPTLC 11-12, by HPLC 13-14 and by conductometry 15. Recently some UV spectrophotometric methods were reported for the estimation of levofloxacin using various solvent such as 0.1M HCl 16, 100% methanol 17, acetonitrile 18 and the mixer of water, methanol and acetonitrile 19. But single estimation of this drug with 0.1M sodium hydroxide as solvent has not been reported in bulk and in pharmaceutical formulation.

Thus, the aim of the present work was to develop and validate a simple, reproducible and economic analytical method to estimate levofloxacin in routine analysis.

Materials: Pure Standard of levofloxacin in the form of levofloxacin hemihydrates powder was received as a kind gift from Renata Pharmaceuticals Ltd., Bangladesh which was used as reference standard. The commercial levofloxacin dosage forms used were tablet levoxin-500mg and infusion (IV) levoxin (100 ml, 5mgmL-1) were purchased from the local market.

The intraday precision of the developed UV method was determined by preparing the samples of the same batch in nine determinations with three concentrations (2, 4, 6 μg/mL) and three replicate (n=3) each on same day i.e. zero hour, fourth hour and eighth hour. The percentage RSD of the results was used to evaluate the method precision. The interday precision was determined by assaying the samples in triplicate (n=3) per day for consecutive 3 days.

Assay of levofloxacin formulations available in Bangladesh: Twenty tablets were individually weighed and triturated to obtain homogeneous mixture. An amount of powder equivalent to 10mg of levofloxacin was taken in 100mL volumetric flask and was diluted with 0.1N NaOH to make 100μg/mL and was sonicated for 20 min to effect complete dissolution of levofloxacin, the solution was then filtered. The aliquot of the filtrate was further diluted to get final concentration of 10μg/mL of levofloxacin. The % assay of the drug was calculated.

RESULTS AND DISCUSSION: The method discussed in the present work provides a convenient and accurate way for analysis of levofloxacin. The different concentrations of 2, 4, 6, 8, 10 and 12 μg/mL were scanned and the wavelength of maximum absorption was found at 288 nm (Figure 1). 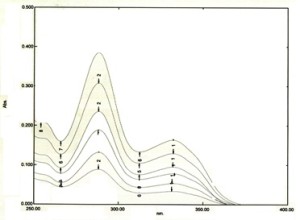 The drug obeyed the Beer‘s law with the concentration range 2– 12 μg/mL with R2 value 0.999 and represented excellent linear relationship of the newly developed method (Figure 2). The LOD and LOQ of the developed method were determined by injecting progressively low concentrations of the standard solutions for 6 times and the values of LOD and LOQ were found to be as 0.087μg/mL and 0.164μg/mL respectively. 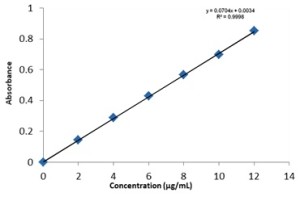 The precision of the proposed method was checked by intra-day and inter-day repeatability of responses which confirmed adequate sample stability and method reliability over 24 h periods where RSD% amongst responses was found as < 2% (Table 1).

The accuracy was evaluated at three different concentrations which were conducted in successive analysis (n = 3) using the proposed method and the value was expressed as percentage of recovery between the mean concentrations of recovered and injected concentration of the drug. The average recoveries were found to be as 99.96%, 100.33% and 99.92% for the concentration levels of 80%, 100% and 120% respectively (Table 2).

TABLE 2: DETERMINATION OF ACCURACY OF LEVOFLOXACIN BY UV-VISIBLE SPECTROPHOTOMETER (n=3)

The assays were validated by means of the analysis of variance. Levofloxacin content in two pharmaceutical dosage forms (tablet and injection) were determined by this proposed method which were in good agreement with the label claims with RSD value of 0.02% for tablet and 0.01% for injectable dosage form (Table 3). The %RSD was found in the range of 0.136 – 0.213% for robustness and ruggedness. The specificity of the analytical method was proved by comparing the spectra of placebo and degradation product of sample solution with that of accuracy sample.

All experimental results were within the range of the acceptability which indicated that the developed method was sensitive enough and accurate for quantitative analysis of levofloxacin.

Therefore, the method was applied for quantitative analysis of levofloxacin in bulk and pharmaceutical dosage form.

CONCLUSION: This UV-spectrophotometric technique was quite simple, accurate, precise, reproducible and sensitive. The UV method has been developed for quantification of levofloxacin in pharmaceutical dosage forms. The validation procedure confirms that this is a workable method for their quantification in the raw material and also in the formulations.