ABSTRACT: A simple, precise isocratic stability indicating RP‐HPLC method was developed for the determination of isopropamide and trifluoperazine in pure and its pharmaceutical formulations. In the developed method, methanol, acetonitrile and water in the ratio of 40:30:30 (v/v) as mobile phase and Waters C-18 (250mm x 4.6mm, 5μm) column as stationary phase were used. The flow rate and detection wavelength were 0.9mL/min and 240 nm respectively. The method was validated as per ICH guidelines for specificity, linearity and range, precision, accuracy, robustness, solution stability, limit of quantification and limit of detection. The stability-indicating capability was established by forced degradation experiments. The results of all the validation parameters were well within their acceptance limits and also the degradation products formed during different stress conditions in stability studies were separated from both drugs and also from individual degradation products. This validated method was applied for the simultaneous estimation of isopropamide and trifluoperazine in commercially available formulation sample.

INTRODUCTION: Trifluoperazine belongs to phenothiazine chemical class and is a typical antipsychotic drug used for treating schizophrenia. It may also be used for the short-term treatment of certain types of anxiety 1 - 3. It is believed to work by blockading dopamine D1 and D2 receptors in the mesocortical and mesolimbic pathways, relieving or minimizing such symptoms of schizophrenia as hallucinations, delusions and disorganized thought and speech 4 - 9.

The drug may also be used to treat genitourinary spasm. The drug works by inhibiting parasympathetic nerve impulses by selectively blocking the binding of the neurotransmitter acetylcholine to its receptor in nerve cells. The nerve fibers of the parasympathetic system are responsible for the involuntary movements of smooth muscles present in the gastrointestinal tract. Inhibition here decreases acidity and motility, aiding in the treatment of gastrointestinal disorders11. 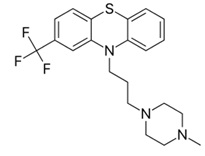 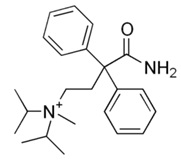 Methanol, acetonitrile, water (Merck, Mumbai, India) were of HPLC grade, while sodium perchlorate used for the preparation of mobile phase was of analytical grade (Merck Specialties Private Limited, Mumbai, India).The membrane filters 0.22 μm and syringe filters 0.45μm for the analysis were supplied by Millpores (Millipores Ltd. Banglore). Denver electronic analytical balance (SI-234). was used to weigh the standard and sample drugs. Analytically pure isopropamide and trifluoperazine were obtained as gift sample from reputed pharmaceutical companies. Formulations of stelbid tablet containing a combination of trifluoperazine and isopropamide with labeled amount of 2mg and 5mg respectively were procured from local market.

Preparation of standard solutions: A stock solution of trifluoperazine and isopropamide was prepared by dissolving 100 mg of the standard drug in 100 mL volumetric flask with methanol individually. These solutions were sonicated for 15 min and filtered through mill pore filter paper with 0.45μm pore size. The aliquots of this solution were diluted accurately with mobile phase to get working standard solutions of trifluoperazine - 2-12μg/mL and isopropamide in the concentration range of 5-30μg/mL.

Preparation of sample solution: 10 formulation tablets of isopropamide and trifluoperazine (Stelbid; Trifluoperazine - 2 mg and Isopropamide - 5 mg) were powdered and the powder equivalent to 10mg of trifluoperazine was weighed accurately and was dissolved in 10mL mobile phase. Then it was filtered and made up to 10mL with same diluents to make 1000µg/mL stock solution. From this by proper dilution, appropriate concentrations of the two drugs in the dosage form were prepared.

Method development: Various chromatographic conditions like mobile phase ratio, mobile phase solvents, column, pH of the mobile phase, wavelength of the detector etc. have been optimized in order to achieve separation and identification of trifluoperazine and isopropamide. Chromatographic conditions with best system suitability conditions were selected. The developed method was validated in terms of system suitability, specificity, linearity and range, precision, accuracy, limit of detection, limit of quantification, solution stability and robustness as per USP and ICH guidelines 24-26.

Method development: The RP-HPLC chromatographic conditions were optimized to get best resolution and peak shape. The selection of mobile phase was based on peak parameters like symmetry and theoretical plates. Symmetrical peaks with good separation (retention time for trifluoperazine is 4.4 and isopropamide is 5.9min) were obtained with reverse phase Waters C-18 (250mm x 4.6mm, 5μm) column. The mobile phase containing methanol, acetonitrile and water in the ratio of 40:30:30(v/v) was used at a flow rate of 0.9mL/min. The optimum wavelength for detection and quantification was at 240nm, at which good detector response was obtained for both the drugs. The results are given in Table 1 and the standard chromatogram was given in Fig. 2.

TABLE 1: OPTIMIZED CHROMATOGRAPHIC CONDITIONS FOR THE ANALYSIS OF ISOPROPAMIDE AND TRIFLUOPERAZINE

Method Validation: System suitability parameters like number of theoretical plates (N), peak asymmetry factor (As), resolution etc., were studied in the developed method. The results are given in Table 2.

Linearity was established by least squares linear regression analysis of the calibration curve. The calibration curves were linear over the concentration range of 2-12μg/mL (y = 37333x + 17107) for trifluoperazine and 5-30µg/mL (y = 45766x + 86516) for isopropamide. Peak areas were plotted versus respective concentrations and linear regression analysis was performed on the resultant curves. Correlation coefficients were found to be 0.998 and 0.999 for isopropamide (Fig. 3) and trifluoperazine (Fig. 4) respectively. The results are given in Table 3. 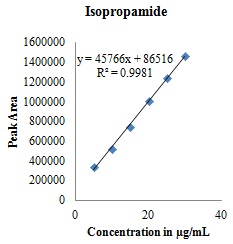 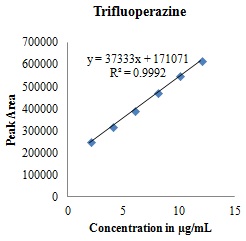 The precision of the analytical method was studied by multiple sampling of the homogenous sample. The precision was done at two levels (intraday and inter day). Intraday precision was done by analyzing the intermediate concentration of each drug for six times. Interday precision was measured over three consecutive days for the same drug concentrations for six times. The %RSD values were calculated for each of them. The intraday precision study for six sample preparations in marketed samples showed a RSD of 1.34 and 0.42 for trifluoperazine and isopropamide respectively. For the interday precision, a study carried out by the same analyst working on different days. The inter day RSD values (For Standard) were found to be 0.90 and 0.65 for trifluroperazine and isopropamide respectively. The same study was carried out by different analysts (n=6 number of samples per analyst) obtaining a RSD of 0.99 and 0.70 (ruggedness) respectively for trifluoperazine and isopropamide. These results show that the proposed analytical technique has a good intermediate precision. Results are summarized in Table 3. Robustness of the method was determined by small deliberate changes in detector wavelength, mobile phase pH and mobile phase ratio. The content of the drug was not adversely affected by these changes as evident from the low value of relative standard deviation indicating that the method was rugged and robust.

Recovery studies were carried out by applying the method to drug sample to which known amount of standard trifluoperazine and isopropamide corresponding to 50%, 100% and 150 % of label claim had been added. At each level of three determinations were performed. LOD and LOQ decide about the sensitivity of the method. LOD is the lowest detectable concentration of the analyte by the method while LOQ is the minimum quantifiable concentration. LOD and LOQ were calculated from standard calibration curves. The proposed procedures were successfully applied for the simultaneous estimation of trifluoperazine and isopropamide in the formulation and the drug contents in each sample were calculated by comparison with the appropriate standard solution of the drug. The results obtained were in agreement with label claim. The summaries of results of analysis are given in Table 3. The chromatogram for formulation was shown in Fig. 5.

CONCLUSION: An isocratic stability-indicating HPLC-UV method has been developed for the estimation of isopropamide and trifluoperazine in bulk and pharmaceutical formulations. Separation was achieved on Waters C-18 (250mm x 4.6mm, 5μm) column using mobile phase of methanol, Acetonitrile and water in the ratio of 40:30:30 (v/v) at a flow rate of 0.9mL/min. UV detection was carried at a wavelength of 240nm.The method is successively applied to pharmaceutical formulation. No chromatographic interferences from the tablet excipients were found. The suitability of this HPLC method for quantitative determination of the compounds is proved by validation in accordance with the requirements of ICH guidelines. Statistical data showed that RP-HPLC methods are robust, rugged, sensitive and accurate as compared to existing analytical methods.

ACKNOWLEDGEMENT: I am thankful to the management of KBN PG College for their consistent support and encouragement.