ABSTRACT: This paper describes a simple, precise, and validated high-performance liquid chromatographic method for the simultaneous quantitative determination of Acetylcysteine and Cefixime in pharmaceutical formulation in the presence of degradation products. The separation was achieved using a Kromasil C8 reverse phase column (25X 0.46mm I.D, 5µ particle size) at room temperature with an isocratic mixture of methanol:KH2PO4 (50mM, pH 3.0) (30:70) at a flow rate of 1ml/min and detection at 228 nm. To establish stability indicating capability of the method, drug product was subjected to the stress conditions of acid, base, oxidative, hydrolytic, thermal and photolytic degradation. The degradation products were well resolved from Acetylcysteine and Cefixime. The developed method was validated as per ICH guidelines with respect to specificity, linearity, accuracy, precision and robustness. The developed methodology is an economic, time-saving, straight forward and precise assay for the determination of Acetylcysteine and Cefixime in pharmaceutical preparation. It can be readily utilized for Quality Assurance (Q.A) and Research and Development (R&D) laboratories of pharmaceutical industry

INTRODUCTION: Acetylcysteine, (2R)-2-acetamido-3-sulfanylpropanoic acid, is mainly used as a mucolytic in bronchitis or pulmonary diseases. By depolymerizing mucopolysaccharides it reduces the viscosity of pulmonary secretions 1. Besides its mucolytic effect it also has anti-oxidant and anti-inflammatory effects. It is used as an antidote in Paracetamol poisoning 2 and as adjunctive therapy to patients suffering from clinical septic shock. N-Acetylcysteine causes cleavage of disulfide bonds by converting them to two sulfhydryl groups.

This action results in the breakup of mucoproteins in lung mucus, reducing their chain lengths and causes thinning of the mucus thus facilitates easy removal of the same and therefore improving conditions such as bronchitis and flu 3.

Cefixime,(6R,7R)-7-[(2Z)-2-(2-amino- 1,3-thiazol-4-yl)-2-[(carboxymethoxy)imino]-3-ethenyl-8-oxo-5-thia-1-azabicyclo[4.2.0]oct-2-ene- 2 - carboxylic acid, is oral third generation cephalosporin. Several investigations on Cefixime have indicated that it is an orally active antibiotic with similar antibacterial spectrum and resistance to β-lactamase as for parenteral third generation cephalosporins. Cefixime has potent antibacterial activity against a wide range of bacteria. It is highly stable towards β-lactamases and has long duration of action. Memon et al. reported Cefixime as a safe, effective, and cheaper oral option for the treatment of multidrug-resistance 4, 5. 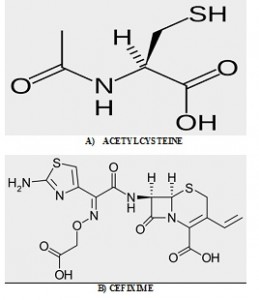 FIG. 1: CHEMICAL STRUCTURE OF DRUGS A) ACETYLCYSTEINE, B) CEFIXIME

A thorough literature survey revealed that Post-column derivatization method is available for determination of endogenous and high therapeutic concentration of N-Acetylcysteine in plasma detected by fluorimetry 1. Few methods are reported for the determination of Acetylcysteine by LC-UV-MS and RP-HPLC in pharmaceutical formulation 6.

Therefore, attempts were made in this study to develop a fast, sensitive, selective, and robust stability indicating Reverse Phase High-Performance Liquid Chromatography (RP-HPLC) method for the simultaneous determination of Acetylcysteine and Cefixime in pharmaceutical formulation. The proposed method is able to separate Acetylcysteine and Cefixime with each other and their degradation products. The developed LC method was validated with respect to specificity, linearity, limit of detection and quantification, precision, accuracy and robustness. Forced degradation studies were performed on the drug products. Developed method separates all degradation products from Acetylcysteine and Cefixime, and exhibits stability indicating nature. These studies were performed in accordance with established International Conference on Harmonization (ICH) guidelines.

Preparation of Standard solution: An accurately weighed quantity of Acetylcysteine working standard about 90 mg and Cefixime working standard about 60 mg were transferred into two different 10 mL volumetric flasks. About 5mL of HPLC grade methanol was added to each volumetric flask and sonicated for 5 mins and made up to the mark with HPLC grade methanol which gave the final concentration (9000 µg/mL& 6000 µg/mL) of Acetylcysteine and Cefixime respectively. This solution was further diluted with diluent to give a solution containing 90 µg/mL and 60 µg/mL concentrations of Acetylcysteine and Cefixime respectively.

A composite of 20 tablets with label claim of 300mg of Acetylcysteine and 200mg of Cefixime were grinded into a fine powder. Quantity of resulting powder equivalent to 500mg was accurately weighed and transferred into a 50 mL volumetric flask. 25mL methanol (HPLC grade) was added and the solution was sonicated for 25-30 mins and the volume was adjusted with methanol (HPLC grade) and filtered through Whatman filter paper.

This solution was further diluted with diluent to give a solution containing 90µg/mL and 60µg/mL concentrations of Acetylcysteine and Cefixime respectively.

Forced degradation studies were performed on 90µg/mL and 60µg/mL concentration of Acetylcysteine and Cefixime respectively on tablets to provide an indication of the stability-indicating property and specificity of proposed method. Peak purity test was carried out for the Acetylcysteine and Cefixime peaks by using PDA detector on stress samples. All the solutions used in forced degradation studies were prepared by dissolving the drug product in small volume of stressing agents.

After degradation, these solutions were diluted with diluent to yield stated Acetylcysteine and Cefixime concentration of about 90µg/mL and 60µg/mL. Conditions employed for performing the stress studies were as follows 11.

2mL of the stock solution was pipetted out and transferred into 10 mL volumetric flask containing 3mL of mobile phase. To this 1 mL of 2N HCL was added and the mixture was kept at 80⁰C for 2hrs. The solution was brought to ambient temperature, neutralized by addition of 1mL 2N NaOH and diluted to 10 mL with mobile phase.

2mL of the stock solution was pipetted out and transferred into 10mL volumetric flask containing 3 mL of mobile phase to this 1 mL of 1N NaOH was added and the mixture was kept at 80⁰C for 30 mins. The solution was brought to ambient temperature, neutralized by addition of 1mL 1 N HCl and diluted to 10 mL with mobile phase.

Susceptibility of the drug product to the light was studied. 2mL of the stock solution was pipetted out and transferred into 10 mL volumetric flask containing 3mL of mobile phase exposed to visible light for 1 day and final volume was made up with mobile phase.

The main objective of the chromatographic method was to separate and quantitate Acetylcysteine and Cefixime in the presence of degradation products. An isocratic method was employed using 25mM potassium dihydrogen orthophosphate (pH 6.0) and acetonitrile in the ratio of 45:55 v/v as mobile phase, Kromasil C18 column (25 mm x 0.46 mm I.D., 5μm) with flow rate of 1.0 mL/min on HPLC equipped with Photo Diode Array (PDA) detector. Retention time of Acetylcysteine was not reproducible and tailing factor for Cefixime peak was found to be more than 2.0, hence to reduce the tailing and to obtain reproducibility an attempt was made with methanol and potassium dihydrogen phosphate (25mM, pH6.0), (60:40 v/v).

Peak fronting for Cefixime was observed and retention time of  Acetylcysteine was found to be in void volume, to increase retention time of Acetylcysteine mobile phase mixture was modified Methanol: Potassium dihydrogen phosphate (25mM, pH6.0) (65:35 v/v) and Kromasil C8 (25 X 0.46mm I.D., 5μm) was selected. On the optimization of mobile phase ratio, Acetylcysteine and Cefixime peaks were well resolved from degradation products. Based on these experiments, the final optimized conditions are described below:

Kromasil C8 (25X0.46mm I.D., 5μm particle size) was used as stationary phase. The mobile phase consists of methanol: potassium dihydrogen phosphate buffer (50mM, pH3.0)(30:70 v/v). The detection was monitored at 228nm. The injection volume was 20μL. The typical retention time of Acetylcysteine and Cefixime were about 3.2 and 4.1 mins respectively. 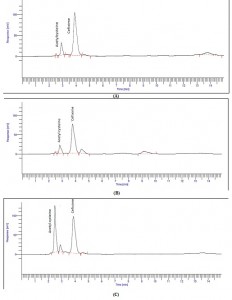 The proposed method was validated by determining its performance characteristics regarding specificity, accuracy, precision, limit of detection and quantification, linearity, range and robustness.

System suitability shall be checked for the conformance of suitability and reproducibility of chromatographic system for analysis. System suitability was determined before sample analysis from five replicate injections of the standard solution containing 90μg/mL of Acetylcysteine and 60μg/mL Cefixime. The acceptance criteria were less than 2% Relative Standard Deviation (RSD) for peak areas, USP tailing factor less than 2.0 and USP plate count more than 5000 for Acetylcysteine and Cefixime peaks from standard solution. All critical parameters tested met the acceptance criteria (Table 2).

The LOD and LOQ were determined at a signal-to-noise ratio of 3:1 and 10:1, respectively, by injecting a series of dilute solutions with known concentrations. The limit of detection and limit of quantification values are reported in (Table 1).

The precision of method was verified by repeatability and intermediate precision. Repeatability was checked by injecting six individual preparations of sample containing Acetylcysteine and Cefixime at 50, 80%, 100%, 120% and 150% level of test concentration (45,72,90,108,135 μg/mL for Acetylcysteine and 30,48,60,72,90μg/mL for Cefixime). The relative standard deviation of the percentage assay of each analyte was calculated and found to be less than 1.9% in repeatability and less than 1.8% in intermediate precision study, which confirms the good precision of the method. The % RSD values are presented in (Table 4).

Robustness: The robustness of the method was evaluated during development by making small, but deliberate, changes to the method parameters. The variables evaluated in the study were pH of the mobile phase buffer (± 0.2 unit), flow rate (± 0.1 ml/min) and % organic in the mobile phase (+10%) and system suitability parameters such as % RSD, retention time, tailing factor and theoretical plates of .3.0 and Cefixime standard were studied. In all the deliberate varied chromatographic conditions, system suitability parameters met the acceptance criteria (Table 6). Thus, the method was found to be robust with respect to variability in applied conditions.

aAmount of both analytes spiked with respect to target concentration, bMean ±%RSD, n=3

b%RSD of the analyte peak areas from 5 injections.

cTailing factor of the analyte peak

dPlate count of the analyte peak

CONCLUSION: A simple and efficient reverse-phase HPLC method was developed and validated for quantitative determination of Acetylcysteine and Cefixime in pharmaceutical dosage forms. The method was found to be precise, accurate, linear, robust,rapid and economical during validation as per ICH guideline Q2 (R1). Satisfactory results were obtained from the validation of the method. The method is stability indicating and can be used for routine analysis of production samples and to check the stability of the Acetylcysteine and Cefixime tablets.

ACKNOWLEDGEMENT: The authors are thankful to the Principal of Dr. Bhanuben Nanavati College of Pharmacy, Vile Parle, Mumbai, India for providing all necessary facilities and encouragement throughout the research work, the authors thank Mr. Atul Sherje for the support in the project work.