ABSTRACT: A simple and fast isocratic reverse phase- high performance liquid chromatography (RP-HPLC) method was developed for estimation of iloperidone from rat plasma employing a photo diode array (PDA) detector. The plasma samples were prepared by protein precipitation using acetonitrile as extracting solvent. The chromatographic separation was performed on a BDS Hypersil Phenyl column (250 mm × 4.6 mm; 5 μm) using a mixture of 0.01 M sodium dihydrogen phosphate buffer (pH 6.0) and acetonitrile (60:40, v/v) as mobile phase with a flow rate of 1.5 ml/min, retention time 7.04 min, and detection wavelength 276 nm. The method was validated for linearity, sensitivity, selectivity, accuracy, precision, and stability according to USFDA guidelines. The calibration curve exhibited linearity in the concentration range of 50–1000 ng/ml (r2=0.998) and the lower limit of quantification (LLOQ) and limit of detection (LOD) of the method were 50 ng/ml and 30 ng/ml respectively. The chromatographic runs were selective without any interfering peaks at the retention time of iloperidone. The accuracy and precision of the method were within USFDA specified range. The plasma samples showed stability over a period of 24 h at room temperature, for two months at - 20 °C, and three freeze/thaw cycles.

INTRODUCTION: Iloperidone is an atypical anti­psychotic drug approved in the year 2009 by USFDA for the treatment of schizophrenia 1, 2. It is quite effective in dealing with both positive and negative symptoms of schizophrenia and has many advantages over other atypical antipsychotic agents. Its tolerability in patients is exceedingly good as it induces very less extrapyramidal symptoms 3. Currently it is marketed as tablet dosage form in the strengths of 1 - 12 mg.

Several HPLC methods have been reported for quantification of iloperidone in bulk drug and tablet dosage forms 4, 5, 6, 7. For its estimation in human plasma, LCMS methods have been developed 8, 9, 10, 11, 12. The LCMS based methods however, are not only expensive but the non-availability of this instrumental facility in the conventional research labs remains a constraint as compared to HPLC methods which are most widely employed in the drug analysis.

Although, an HPLC method has been reported for simultaneous determination of iloperidone in presence of idebenone in rat plasma using UV detector with 8.108 min retention time 13, but the HPLC method employing a PDA detector has not been developed for the estimation of iloperidone in biological samples. The PDA detector facilitates faster analyte quantification at multiple wavelengths simultaneously and also possesses a higher wavelength precision, sensitivity, reliability, and ruggedness in comparison to UV detector 14, 15.

In the present study a simple, fast, sensitive, and reproducible HPLC method was developed for quantitative estimation of iloperidone in rat plasma using PDA detector.

Linearity: The standard solutions of iloperidone in rat plasma were prepared in the concentration range of 50 - 1000 ng/ml (n=6). Each sample was subjected to chromatographic analysis starting from lower to higher concentration. A standard curve was constructed by plotting chromatographic peak area against the drug concentration and its linearity was statistically confirmed.

Sensitivity: The minimum concentration of analyte which can be accurately and precisely measured was calculated using signal to noise ratio. Serially diluted standard solutions of iloperidone were spiked into the rat plasma and analyzed (n = 6). The concentrations yielding three times and five times more intense chromatographic response as compared to the baseline noise were measured as the limit of detection (LOD) and lower limit of quantification (LLOQ) of iloperidone respectively.

Selectivity: The blank plasma samples obtained from six different rats were separately analyzed (n = 6) and the resulting chromatograms were compared with those obtained from the analysis of standard solutions of iloperidone in rat plasma at the lower limit of quantification in order to find out any possible interference of the endogenous substances present in the plasma at the retention time of the peak.

Accuracy: Recovery method was used to determine accuracy of the developed RP-HPLC method. For this three concentrations of standard solution of iloperidone in rat plasma, i.e., 100 ng/ml, 400 ng/ml, and 1000 ng/ml (nominal drug concentrations) respectively were estimated (n=6) and the mean recovery was calculated. The accuracy was reported as percent relative error (%RE) of the recovered amount.

Precision: Precision of the developed method was assessed by analyzing the standard solution of iloperidone in rat plasma (n=6) in the strengths of 100 ng/ml, 400 ng/ml, and 1000 ng/ml (nominal drug concentrations) and measuring peak areas of their chromatograms. The within-run precision, i.e., repeatability of the method within a batch was determined by estimating the nominal drug concentrations in the same run on the same day, while the between-run precision, i.e., repeatability of the method over time was determined by estimating them on three different days. The precision was measured as the percent coefficient of variation.

Stability: The stability of standard solutions of iloperidone in rat plasma was determined (n=3) both at a lower concentration (100 ng/ml) and a higher concentration (1000 ng/ml) at room temperature for twenty four hours (bench top condition), at - 20 °C for two months (long-term storage), and after subjecting to three freeze/thaw cycles alternating - 20 °C and room temperature to mimic the sample handling conditions.

RESULTS AND DISCUSSION: Optimization of Chromatographic Conditions: Different types of columns and mobile phases were evaluated for obtaining a selective and efficient separation with a symmetric peak and optimum retention time. Three types of columns namely, Waters C - 8 Column, Thermo BDS Hypersil C-18 column, and Thermo BDS Hypersil Phenyl column were studied. Since, iloperidone is practically insoluble in water and freely soluble in acetonitrile 17, the mixtures of phosphate buffer of different pH and acetonitrile in different ratios were employed as mobile phases.

The BDS Hypersil Phenyl column (4.6 mm × 250 mm, particle size 5 µm) provided the best selectivity and sharp peaks with maximum signal to noise (S/N) ratio and minimum retention time as compared to Waters C-8 and Thermo BDS Hypersil C-18 columns which resulted in significant peak tailing and higher retention times (> 12 min). The BDS (base deactivated silica) columns are more selective in nature because they are end-capped for reduced tailing of the peak and attached with phenyl group to provide better selectivity. The pH of the buffer used in mobile phase was found to affect the peak shape such that the extremes of pH towards both acidic and basic sides resulted in significant peak tailing. At pH 6.0 the sharpest peak with least tailing was observed.

The mixture of 0.01 M sodium dihydrogen phosphate buffer (pH 6.0) and acetonitrile in 60:40 ratio was selected as the mobile phase because it produced a sharp and resolved peak shape with only 40% of the organic solvent. The spectral peak of iloperidone in the non-interfering zone was most prominent at 276 nm and therefore it was selected as the detection wavelength. The retention time for elution of iloperidone was 7.04 min with a total run time of 8.5 min (Fig. 1).

Extraction Procedure: The protein precipitation method using acetonitrile as solvent was employed for extraction of iloperidone from plasma because it is a simple method and involves lesser number of steps 18. Acetonitrile was selected as solvent because iloperidone is freely soluble in it and it also has a good plasma protein precipitating property.

Sensitivity: The least concentration of the analyte (LLOQ) measured with the acceptable accuracy and precision from the standard solution of iloperidone in rat plasma was found to be 50 ng/ml and the limit of detection (LOD), i.e., the least quantity of analyte which gives a peak area of three times that of baseline noise (signal-to noise ratio of 3:1) was detected as 30 ng/ml.

Selectivity: The chromatogram of spiked samples showed sharp peak of iloperidone at its retention time. The chromatogram of the blank plasma showed only few peaks between 1 and 4 minutes of detection time and no significant signals were seen afterwards (Fig. 1). 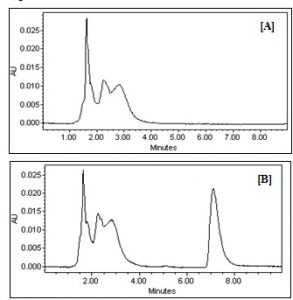 FIG. 1: HPLC CHROMATOGRAMS OF BLANK PLASMA [A] AND PLASMA SPIKED WITH ILOPERIDONE [B]

Accuracy: As shown in Table 1, the intra-day and inter-day percent relative error (%RE) of the recovered amount of iloperidone from its standard solutions in rat plasma was found to be 4.64%, −5.67% and 3.68% and 5.80%, 2.96% and 4.20% respectively for 100 ng/ml, 400 ng/ml, and 1000 ng/ml concentrations. Since the recovery of drug was in the range of ± 6% of the nominal drug concentrations, i.e., well within the limits of ± 15% as prescribed by USFDA16, it confirmed that the developed method can accurately determine iloperidone in rat plasma.

Precision: Precision was determined by analyzing three drug concentrations of standard solutions of iloperidone in rat plasma, i.e., 100ng/ml, 400ng/ml, and 1000ng/ml. As shown in Table 1, the % coefficient of variation (%CV) for within-run or intra-day precision was between 2.02% and 8.77% and that for between-run or inter-day precision on three different days was between 2.84% and 6.31%. Since the values of both intra-day and inter-day precision were within the accepted limits of 15% CV as prescribed by USFDA,16 it confirmed that the developed method is a precise method for analysis of iloperidone in rat plasma.

Stability: The results presented in Table 2 show that the percent nominal concentration of standard solutions of iloperidone in rat plasma subjected to stability study was found to be within the range of 4% of the nominal drug concentrations under all the stability conditions which was much below the 15% limit prescribed by USFDA 16. This confirmed that the standard solutions of iloperidone in rat plasma were stable.

CONCLUSION: A simple, fast, sensitive, accurate, and precise RP-HPLC method using PDA detector was developed for estimation of iloperidone in rat plasma with a retention time of 7.04 min and total run time of 8.5 min. The mobile phase used in the method consisted of only 40% organic solvent. The method was linear over a concentration range of 50 - 1000 ng/ml (r2 = 0.998) with an LLOQ of 50 ng/ml and demonstrated good accuracy and precision. The iloperidone was stable in rat plasma samples for 24 h at room temperature, two months at - 20 °C, and under three freeze/thaw cycles.