ABSTRACT: An accurate, precise and reproducible high performance liquid chromatographic method was developed for quantitative estimation of hydrochlorothiazide in tablet dosage forms. Chromatographic separation of the drug was achieved on a Kromasil C18 column (150 x 4.6 mm; 5µ) using a mobile phase consisting of phosphate buffer (pH 2.5) and acetonitrile (50:50 v/v) at a flow rate of 0.6 mL/min. The drug in the eluate was monitored at 254 nm. The retention time obtained for the drug was 3.47 min. The calibration curve was linear over the range of 20-60 µg/mL of the drug. The performance of the method was validated according to ICH guidelines. The method could be applied for determination of hydrochlorothiazide in its tablet dosage forms without any interference from excipients or endogenous substances. The proposed method is suitable for routine quality control analysis of hydrochlorothiazide.

INTRODUCTION: Hydrochlorthiazide 1, 2 (6-chloro- 1,1-dioxo- 3,4-dihydro-2H- 1,2,4-benzothiadiazine -7-sulfonamide) (Figure 1) is a first-line diuretic drug, which acts by inhibiting the kidneys’ ability to retain water. It is frequently used in the treatment of hypertension, congestive heart failure, symptomatic edema, diabetes insipidus, renal tubular acidosis, and for the prevention of kidney stones. 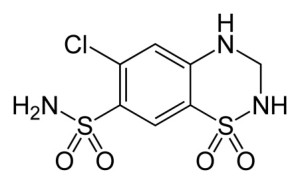 A literature survey revealed that many analytical methods have been reported for the determination of hydrochlorothiazide in pharmaceutical dosage forms and in biological samples using HPLC 3-9, HPTLC 10 and spectrophotometry 11-14 techniques.

We have developed a new accurate and precise RP-HPLC method with short retention and run times for the determination of hydrochlorothiazide in bulk samples and in tablet dosage forms. The developed method has been validated as per ICH 15 guideline.

Equipment and Chromatographic conditions: A Waters Alliance liquid chromatograph (model 2695) monitored with Empower2 data handling system and fitted with a Kromasil C18 column (150 x 4.6 mm; 5mm) and a Diode array detector (model 2996) was employed for this study. The mobile phase used consisted of a mixture of Phosphate buffer (pH 2.5) and acetonitrile in the ratio of 50:50 v/v. All chromatographic runs were carried out in isocratic elution mode with a flow rate of 0.6 mL/min. The detector wavelength was set at 254 nm. The sample injection volume was 20 µL.

Preparation of the Buffer: Phosphate buffer was prepared by dissolving 2.85 g of potassium dihydrogen phosphate in 1000 mL of water and adjusting the pH to 2.5 using ortho-phosphoric acid. The solution was filtered through a 0.45µ filter and sonicated.

Preparation of the Mobile phase and the Diluent: The above phosphate buffer and acetonitrile were mixed together in the ratio of 50:50 v/v and employed as the mobile phase. The same solution was also used as the diluent for preparing drug dilutions.

Preparation of the Working Standard Solution of Hydrochlorothiazide: About 100 mg of hydrochloro-thiazide was accurately weighed and transferred into a 100 mL volumetric flask. 70 mL of the diluent was added to it and sonicated to dissolve the drug. The volume was made up with a further quantity of the diluent and the solution mixed well. This was used as the standard stock solution.    2.0 mL of the stock solution was transferred into a 50 mL volumetric flask, made up to volume with the diluent to get a concentration of 40 µg/mL of hydrochlorothiazide. This was used as the working standard solution.

Estimation of the Drug from its Tablet Dosage Form: Twenty tablets of Aquazide-12.5 (Sun Pharma) were weighed and ground to a fine powder. An amount equivalent to about 100 mg of hydrochlorothiazide was transferred into a 100 mL volumetric flask and to it 70 mL of the diluent was added and sonicated for 20 min. Then further diluent was added to make up the volume and mixed. A portion of the above solution was filtered through a 0.22 µ membrane filter (discarding the first few mL of the filtrate).

2.0  mL of this filtrate was transferred into a 50 mL volumetric flask containing 30 mL of the diluent. The volume was made up to 50 mL with the diluent and mixed well. Six replicate injections of were analyzed on the column. The mean of the peak areas of the drug was found out and the drug content in the formulation was calculated by using the regression equation obtained for the pure drug.

RESULTS AND DISCUSSION: During the method optimization studies various columns with C18 and C8 packing were tested for an ideal separation of the drug using different mobile phases and different chromatographic conditions. Finally, the following conditions were found to be optimum after evaluating the column efficiency by parameters like theoretical plates and tailing factor.

Optimum wavelength was selected by scanning the standard solution of the drug in 200 - 400 nm region in a UV-Vis spectrophotometer. Using the above mobile phase, good base line separation for the hydrochloro thiazide peak was achieved. Under the above optimized conditions, the retention time for hydro chlorothiazide was found to be 3.475 min (Figure 2).

Specificity: The chromatograms obtained for the samples of tablet dosage forms demonstrate that no interfering peaks were found at the retention time of hydrochlorothiazide due to the excipients (Figure 3).

Linearity: The regression of the plot was computed by least squares method and is shown in Figure 4. The calibration curve (n=5) constructed for the drug was linear over the concentration range of 20-60 µg/mL. The correlation coefficient is greater than 0.99 and the %RSD for each concentration studied was less than 2. 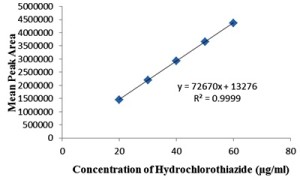 The high percentage of recovery indicates that the proposed method is highly accurate. The precision of the method was demonstrated by inter-day and intra-day variation studies. Six replicate injections of sample solutions were made and the percentage RSD was calculated and presented in Table 3. From the data obtained the developed RP-HPLC method was found to be precise.

System Suitability Parameters: System suitability parameters were studied with six replicates of standard sample solution and the corresponding values are presented in Table 4.

Method Suitability: The commercial tablet formulation, Aquazide 12.5, was analyzed by the proposed method and the average percent recovery was found to be 99.95. The value is in good agreement with the labeled amount, which confirms the suitability of the method for the analysis of hydrochlorothiazide in pharmaceutical dosage forms.

CONCLUSION: The proposed RP-HPLC method is sensitive, precise and accurate and can be used for the routine quality control analysis for the determination hydrochlorothiazide in its tablet dosage forms.

ACKNOWLEDGEMENT: The authors are thankful to M/s Hetero Drugs Ltd., Hyderabad, for the reference sample of Hydrochlorothiazide.