A Reversed Phase Ultra Performance Liquid Chromatographic (RP-UPLC) method was developed for the determination of glipizide (GLI) in in-vitro study during formulation development. The chromatographic separation was achieved on a Acquity UPLC BEH C18 (50 mm × 2.1 mm, 1.7 µm) column, with a mixture of 55 volumes of methanol and 45 volumes of buffer contain 0.001M sodium dihydrogen phosphate in isocratic elution with flow rate of 0.3 mL/min. The eluted compound was monitored at a wavelength of 276 nm using a UV detector. The method described herein separated glipizide and glipizide related compound-A from all other formulation components within a run time of 1.2 min. The RP-HPLC method was developed and validated according to the International Conference on Harmonization (ICH) guidelines. This method was successfully applied in the quantitative determination of glipizide in in-vitro study during formulation development. The procedure described herein is simple, selective, and reliable for routine quality control analysis as well as stability testing.

INTRODUCTION: Glipizide (GLI) is an oral medium-to-long acting anti-diabetic drug from the sulfonylurea class. It is classified as a second generation sulfonylurea, which means that it undergoes enterohepatic circulation. The structure on the R2 group is a much larger cyclo or aromatic group compared to the 1st generation sulfonylureas. This leads to a once a day dosing that is much less than the first generation, about 100 fold. Mechanism of action is produced by blocking potassium channels in the beta cells of the islets of Langerhans. By partially blocking the potassium channels, it will increase the time the cell spends in the calcium release stage of cell signaling leading to an increase in calcium. The increase in calcium will initiate more insulin release from each beta cell 1.

GLI is a salt with pKa of 5.9. It is insoluble in water and alcohols, but soluble in 0.1 N NaOH; it is freely soluble in dimethylformamide 2. Related compound-A is the major degradation product of GLI 3.

Ultra performance liquid chromatography (UPLC) has been considered as a novel development in liquid chromatography. It is specially designed to withstand higher system pressures during chromatographic analysis so that it enables significant decrease in separation time and solvent consumption. The UPLC columns packed with 1.7 μm sized particles provides not only increased efficiency but also the ability to work at increased linear velocity without loss of efficiency, providing both resolution and speed. Using advantages of UPLC, a number of applications in different fields including pharmacy,[4-6] clinical analysis, pesticide analysis 7 and tetracyclines in human urine 8 have been reported.

The aim of the present work was the development of an UPLC method for the determination of GLI in the in-vitro study of formulation development. With in short run time. To the best of our knowledge, and base of above method reference analytical methods can separate GLI from all peaks due to diluent, placebo and related compound-A in in-vitro study. Attempts were made to develop a short UPLC method for estimation of GLI in in-vitro study. The developed method was validated according to International Conference on Harmonization (ICH) guidelines [26] to show the capability of the method.

Method Development and Optimization: The main criterion for developing an RP-UPLC method for the determination of GLI using a UV detector was to estimate the amount of GLI in in-vitro study within short runtime, with emphasis on the method being accurate, reproducible, robust, linear, free of interference from other formulation excipients, diluent and convenient enough for routine use in quality control laboratories.

TABLE 1: LABEL CLAIM OF GLIPIZIDE WITH ITS WORKING CONCENTRATION

A spiked solution of GLI (11 µg/mL), glipizide related compound-A (11 µg/mL) and placebo peaks were subjected to separation by RP-UPLC. Initially, the separation of all peaks was studied using 0.001 M sodium dihydrogen phosphate with pH-6.0 buffer and methanol in ratio of 55: 45 on an Acquity UPLC column (BEH C18 (50 mm × 2.1 mm, 1.7µm) and Waters (UPLC) system with a isocratic program. The 0.3 mL/min flow rate was selected to achieve the separation of peaks. The column oven temperature was maintained at 25°C. These conditions resulted in separation of the GLI peak with the placebo peaks and related compound-A peak, represented in Figure 2.

Parameters were as follows: flow rate, 0.3 mL/min; column oven temperature, 25°C; injection volume, 3 µL; and a isocratic program with mobile phase contain 0.001M sodium dihydrogen phosphate ph-6.0 and methanol in ration of 55:45. Based on the UV spectrum of the compound, 276 nm was found to be appropriate for the determination of GLI in in-vitro study in pharmaceutical development. GLI is well resolved with respect to each other in a reasonable time of 1.2 minutes (Figure 2). No chromatographic interference due to the blank (diluent) and other excipients (placebo) at the retention time of GLI was observed, as shown in Figure 2. 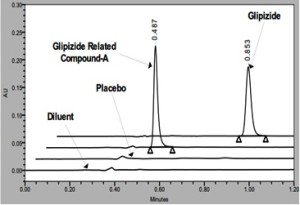 Analytical Parameters and Validation: After development, this method was subjected to validation according to ICH guidelines. The method was validated to demonstrate that it is suitable for its intended purpose by the standard procedure to evaluate adequate validation characteristics (system suitability, accuracy, precision, linearity, robustness and solution stability).

System Suitability: The percentage relative standard deviation (RSD) of area from five replicate injections was below 2.0 %. Low values of RSD for replicate injections indicate that the system is precise. The results of other system suitability parameters such as peak tailing and theoretical plates are presented in Table 2. As seen from this data, the acceptable system suitability parameters would be as follows: the relative standard deviation of replicate injections is not more than 2.0 %, the tailing factor for the peaks of GLI is not more than 1.5 and the theoretical plates is not less than 8000.

Specificity: Specificity studies performed to demonstrate the selectivity of the proposed RP-UPLC method. Figure 2 shows that there is no interference at the RT (retention time) of GLI from the blank, placebo and glipizide related compound-A. The peak attributed to GLI was investigated for spectral purity in the chromatogram of all in-vitro dissolution media and was found to be spectrally pure. The results of the peak purity of standard and sample in different in-vitro dissolution media are report in Table 3.

inearity: The linearity of an analytical method is its ability to elicit test results that are directly, or by a well-defined mathematical transformation, proportional to the concentration of analyte in that sample within a given range. The response was found to be linear from 0.55 µg/mL to 16 µg/mL. The regression statistics are shown in Table 4, with the linearity curve for GLI represented in Figure 3.

Precision: The purpose of this study was to demonstrate the reliability of the test results with variations. The results are shown in Table 5, along with intermediate precision data. Low RSD values indicate that this method is precise.

TABLE 5: PRECISION AND INTERMEDIATE PRECISION RESULTS FOR ALL TIME POINT

Accuracy: The accuracy of an analytical method is the closeness of test results obtained by that method compared with the true values. The amount recovered (for 10, 50, 100 and 150 % level) was within ± 2 % of amount added, indicating that the method is accurate and that there is no interference due to other excipients presents in the formulation. The results of the recovery of GLI are shown in Table 6.

Robustness: The robustness of an analytical procedure is a measure of its capacity to remain unaffected by small but deliberate variations in method parameters and provides an indication of its reliability during normal usage. No significant effect was observed on system suitability parameters such as RSD, tailing factor, or the theoretical plates of GLI when small but deliberate changes were made to chromatographic conditions. The results are presented in Table 2, along with the system suitability parameters of normal conditions. Thus, the method was found to be robust with respect to variability in applied conditions.

Buffer Preparation: A Solution of 0.01M of sodium dihydrogen phosphate was prepared using Milli-Q water adjust pH-6.0 of this solution with sodium hydroxide. The buffer preparation was stable with respect to pH and maintained visual clarity for 48 hours.

Chromatographic Conditions: Use mixture of buffer preparation and methanol in ratio of 45:55 in isocratic program. System control, data collection and data processing were accomplished using Waters Empower chromatography data software. The analytical column used was 50 x 2.1 mm, 1.7 μm Waters acquity UPLC BEH C-18 column (Milford, USA). The optimized conditions were as follows: injection volume: 3.0 μL, flow rate: 0.3 mL min-1 at a column temperature of 25 °C, sample cooler temperature: 25 °C and detection wavelength: 276 nm. Under these conditions the system back pressure was about 6000 psi. The samples for specificity were analyzed using a PDA detector over a range of 200 – 400 nm.

Sample Solution Preparation: Set the parameters of the instrument as mention in test method and degas the medium prior to use. Transfer one tablet in each of six different vessels using 900 ml of medium and operate the apparatus for exactly 24 hours. Withdraw 5 ml of sample at each time point from zone midway between the surface of medium and top of the rotating paddle not less than 1 cm from the vessel wall.

Replace 5 ml of dissolution media in each bowl. Filter this solution with 0.2 µ nylon filter; discard first 2 ml of filtrate and use other solution as a sample.

Placebo Solution Preparation: In preparing the placebo solution, equivalent 10 mg of placebo was accurately transferred into a 1000 mL volumetric flask. Accurately transfer 900 mL of dissolution media was added to the volumetric flask, which was then sonicated in an ultrasonic bath for 90 min. filter this solution with 0.2 µ nylon filter; discard first 2 ml of filtrate and use other solution as a placebo preparation.

Method Validation: The method described herein has been validated for in-vitro study of glipizide by UPLC.

System Suitability: System suitability parameters were performed to verify the system performance. System precision was determined on five replicate injections of standard preparations. All the important characteristics, including the relative standard deviation, peak tailing, and theoretical plate number, were measured.

Linearity: Linearity was demonstrated from 10% to 150 % of standard concentration using a minimum of six calibration levels (10 %, 50 %, 75 %, 100 %, 125 % and 150 %) for GLI. The method of linear regression was used for data evaluation. The peak areas of the standard compound were plotted against the respective standard concentration. Linearity was described by the linearity equation and the correlation coefficient was also determined.

Precision: The precision of the system was determined using the GLI tablets for sample preparation procedure described above for six real samples of GLI tablets and analysis using the same proposed method. Intermediate precision was studied using different columns and was performed on different days.

Accuracy: To confirm the accuracy of the proposed method, recovery experiments were carried out by the standard addition technique. Four levels (10%, 50 %, 100 % and 150 %) of standards were added to placebo in triplicate. The percentage recoveries of GLI at each level and each replicate were determined. The mean of percentage recoveries (n = 12) and the relative standard deviation were also calculated.

Robustness: The robustness is a measure of the capacity of a method to remain unaffected by small but deliberate changes in flow rate (± 0.03 mL/min), change in column oven temperature (± 5 °C) and change in wavelength nm (± 2 nm).

CONCLUSION: A new RP-UPLC method was successfully developed for the estimation of dissolution profile ( In-vitro study) of GLI tablets. The method validation results have verified that the method is selective, precise, accurate, linear, and robust. The run time (1.2 min) enables rapid determination of GLI dissolution. This method is applied for the determination of release of GLI during in-vitro study.

Competing Interests: The authors declare no conflict of interest.