ABSTRACT: A rapid, precise, accurate, sensitive, simple, fast and reliable spectrophotometric method has been developed for determination of Fluoxetine in bulk and pharmaceutical dosage forms. The solubility of Fluoxetine was also examined in various solvents like distilled water, methanol, ethanol, acetonitrile, HCL, chloroform etc. For the determination of working wavelength different concentrations of Fluoxetine (10-60μg/ml) in water: methanol (9:1) was scanned using UV-VIS spectrophotometer within the wave length region of 200-400 nm against water and methanol mixture as blank.  For the calibration curve the prepared concentrations were scanned at 216 nm in UV-VIS spectrophotometer. The R2 value was found to be 0.999. Then the standard deviation was found to be 0.0065. Then the stability study was performed against neutral, acidic and basic condition at 60°C as per ICH guideline.

INTRODUCTION:Fluoxetine is chemically known as (D, L-N-methyl-3-phenyl-3-[(tri-fluoro-p-tolyl) oxy]propylamine and the structure is given in Fig. 1. Actually Fluoxetine is an antidepressantof the selective serotonin reuptake inhibitor (SSRI) class. Fluoxetine was first documented in 1974 by scientists from Eli Lilly and Company. It was presented to the U.S. Food and Drug Administration in February 1977, with Eli Lilly receiving final approval to market the drug in December 1987. Fluoxetine went off-patent in August 2001 1, 2.

Fluoxetine is approved in the US for the treatment of major depression (including pediatric depression), obsessive-compulsive disorder (in both adult and paediatric populations), bulimia nervosa, panic disorder and premenstrual dysphoric disorder 3. In addition, fluoxetine is used to treat trichotillomania if cognitive behaviour therapy is unsuccessful. Incombination with the atypical antipsychotic Fluoxetine it is known by a few brand names, including its US brand name Symbyax, which is approved for the treatment of depressive episodes as part of bipolar I disorder and in the treatment of treatment-resistant depression. A few methods were reported earlier for the determination of Fluoxetine in bulk and pharmaceutical dosage forms 4, 5. The present study is designed to develop a simple, precise and accurate UV spectroscopic and reverse phase HPLC methods with good recoveries and shorter retention time for the estimation of fluoxetine in the tablet formulations.

Determination of Working Wave Length:  In order to determine the wave length of maximum absorption (λmax) of the drug, different concentrations of Fluoxetine (10-60μg/ml) in water: methanol (9:1) was scanned using UV-VIS spectrophotometer within the wave length region of 200-400 nm against water: methanol (9:1) as blank. The working wavelength was found to be 216 nm.

Preparation of Calibration Curve: For preparation of calibration curve of Fluoxetine, a stock solution of 1000μg/ml was prepared. From it different concentrations ranging from 10-60μg/ml prepared and were scanned at 216 nm in UV-VIS spectrophotometer. Then the respective absorbances were noted, which are given in Table 1. 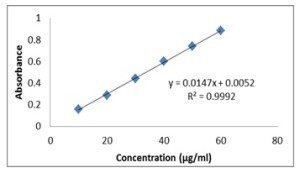 Accuracy: The accuracy of an analytical procedure expresses the closeness of agreement between the value which is accepted either as a conventional true value or an accepted reference value and the value found. This is sometimes termed trueness. The accuracy data are given in Table 3.

TABLE 4: PRECISION DATA OF THE UV-VIS SPECTROPHOTOMETRIC METHOD FOR FLUOXETINE

Robustness/ Ruggedness: The definition for robustness/ruggedness applied is the robustness/ruggedness of an analytical procedure is a measure of its capacity to remain unaffected by small, but deliberate variations in method parameters and provides an indication of its reliability during normal usage. Robustness can be described as the ability to reproduce the (analytical) method in different laboratories or under different circumstances without the occurrence of unexpected differences in the obtained results, and a robustness test as an experimental set-up to evaluate the robustness of a method. The term ruggedness is frequently used as a synonym. Several definitions for robustness or ruggedness exist which are, however, all closely related. Robustness/ Ruggedness data are given in Table 7 and Table 8.

The Limit of quantification (LOQ) of an individual analytical procedure is the lowest amount of analyte in a sample, which can be quantitatively determined with statistical method by using statistical formula. The limit of Quantification (L.O.Q.) was calculated as per below equation:

The limit of detection (LOD) and limit of quantification (LOQ) data are given in Table 9.

TABLE 9: LIMIT OF DETECTION AND LIMIT OF QUANTITATION OF FLUOXETINE

Samples were withdrawn according to protocol. From the drawn samples 25μg/ml solution were prepared and subjected for analysis. The representative UV-VIS spectrum indicates degradation after 5 hr at 60oC.

Hydrolytic Degradation in neutral condition: The neutral degradation data are given in table 11 and UV spectrum are shown in Fig. 3.

Hydrolytic Degradation in Acidic condition: The acidic degradation data are given in Table 12 and UV spectrum is shown in Fig. 4.

Hydrolytic degradation in Basic condition: The basic degradation data are given in Table 13 and the UV spectrum are shown in Fig. 5.

RESULTS AND DISCUSSION: The objective of the present work was development and validation of UV spectral study and degradation of Fluoxetine using UV spectrophotometer. The UV Spectra for Fluoxetine were recorded at the wavelength of 216nm (λmax).

The method was found to be simple and the accuracy, precision, intra-day precision, inter-day precision, repeatability and assay was performed and the results was tabulated below. With this study the degradation pattern were also studied and results were shown previously in the corresponding Tables and the Figures were also given.

ACKNOWLEDGEMENT: The authors are grateful to the Department of the Pharmaceutical Sciences, Birla Institute of Technology for providing the requirements and necessities for the present work. We are also thankful to the La Chemico Pvt. Ltd. for providing us the gift samples of Fluoxetine pure drug.