ABSTRACT: A gradient reverse phase Ultra Performance Liquid Chromatographic (RP-UPLC) method was developed and validated for determination of Micafungin sodium and its synthetic impurities. The successful separation of Micafungin sodium and its synthetic impurities was achieved using Phenomenax Aeris peptide XB C18 (150×2.1 mm i.d., 1.7 µ particle size) column maintained at 45 °C temperature with mobile phase consisting 0.01 M phosphate buffer pH 2.9 and acetonitrile in a gradient programme. The mobile phase flow rate was 0.3 ml/min and the detection wavelength was 279 nm. The retention time in developed method is comparatively less than the reported HPLC methods for determination of Micafungin sodium offering less time consuming and fast analytical method. The developed RP-UPLC method was validated according to ICH guidelines with respect to linearity, accuracy, precision, specificity and robustness and also the LOD and LOQ values were determined

INTRODUCTION: Micafungin is a semi synthetic compound, belonging to a newer class of antifungal agents, echinocandinslipopeptides. It is synthesized by chemical modification of a fermentation product from coleophoma empetri 1. Micafungin selectively inhibit 1,3-β-D-glucan, which is required for fungal cell wall synthesis. It has been approved for the treatment of esophageal candidiasis and for prophylaxis of Candida and Aspergillus infections in patients undergoing hematopoietic stem cell transplantation 2, 3.

The chemical structure of Micafungin sodium, impurity A, impurity B, impurity C and impurity D are shown in figure 1, the molecular weight of the compound is 1292.26 gm/mol and the empirical formula is C56H70N9O23S 4. The drug was first launched in Japan in December 2002 and then also approved by US food and drug administration in March 2005 5, 6.

The quality and safety of drug product can be significantly affected by the presence of impurities and therefore it is important to study the impurity profile of drug substance 7. Ultra performance liquid chromatography (UPLC) is relatively novel technique with new possibilities in liquid chromatography, focusing on decrease of analysis time and solvent consumption 8. UPLC systems can withstand high system back pressure and comprising special analytical columns with sub 2 µm particles. UPLC system allows shortening analysis time up to nine times compared to conventional HPLC system 9. 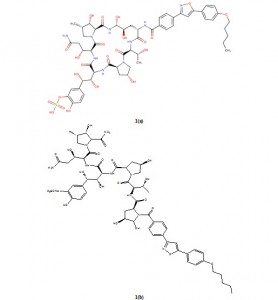 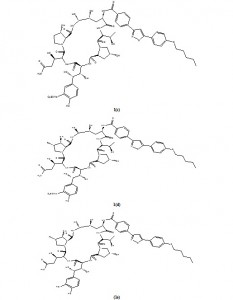 Accurately weighed quantity of Micafungin, 50 mg was transferred into separate 50 ml volumetric flask, dissolved and diluted up to mark with diluent (Phosphate buffer: Acetonitrile 95:5 v/v) to prepare 1000μg/ml of stock solution. A stock solution of impurities (Mixture of imp-A, imp-B, imp-C and imp-D) were also prepared in the diluent.

After method development, validation of the chromatographic method for Micafungin was performed in accordance with ICH guidelines 15.

Linearity is the ability of a method to elicit test results that are directly proportional to analyte concentration within a given range. Range is the interval between the upper and lower levels of analyte that have been demonstrated to be determined with precision, accuracy and linearity. Linearity of the method was checked at seven different concentrations. Linearity solutions of 50, 100, 150, 200, 250, 300 and 350μg/ml were prepared by transferring 0.5, 1, 1.5, 2, 2.5, 3 and 3.5 ml of stock solution to 10 ml of volumetric flask and volume was adjusted with diluent. Linearity solutions for impurity were prepared at 150, 100, 75, 50 and 25 % specification level for each impurity.

Accuracy of analytical method is the closeness of test results to the true value. Accuracy was determined over the range from 50 % as lowest sample concentration to 150 % as highest sample concentration. Triplicate preparations for each level were prepared and injected in presence of spiked impurities to their 100 % specification level. The mean recovery should be within 100±2 % at each concentration over the range of 50-150 % of concentration. Accuracy was demonstrated at 50 %, 100 % and 150 % level with respect to specification limit spiked with API for each impurity. Recovery was determined in triplicates and reported.

The precision of the method was evaluated by carrying out six independent assays of Micafungin test samples and calculating the % relative standard deviation (RSD) of the assay. Precision with related substances was determined by spiking the impurities with Micafungin sodium (300μg/ml) at 100 % specification level of each impurity (six replicates). % RSD of area of each imp-A, imp-B, imp-C and imp-D was calculated. Intraday and interday precision was carried out and % RSD was determined.

The limit of detection and limit of quantification were evaluated by serial dilutions of Micafungin sodium, Impurity A, Impurity B, Impurity C and Impurity D stock solutions in order to obtain signal to noise ratio of 3:1 for LOD and 10:1 for LOQ.

Robustness study was carrying out by changing the minor parameters of the chromatographic conditions. The assay was performed by change in the flow rate, column temperature and minor change in pH by taking three replicates and % RSD was calculate. Resolution was determined between the main peak and closest impurity i.e. impurity B.

The main objective of the chromatographic method development was to separate Micafungin sodium from the imp-A, imp-B, imp-C and imp-D. Several trials were carried out for accurate and precise method development and impurities were coeluted. After using several columns and buffers, suitable column chemistry and good peak shape were obtained with Phenomenax Aeris peptide XB C18 (150×2.1 mm i.d., 1.7 µ particle size), column temperature was adjusted at 45 °C, with gradient mobile phase system consisting Mobile phase A as 0.01M phosphate buffer and Mobile phase B as Acetonitrile. The best separation of Micafungin from the impurities was achieved with a gradient program as follows:

The flow rate was 0.3 ml/min. The injection volume was 5 µl. Depending on peak absorption maxima and peak purity index, 279 nm was selected for detection. The sample temperature was kept at 5 °C. In optimized chromatographic conditions, Micafungin, imp-A, imp-B, imp-C and imp-D were separated with good resolution, typical retention time were 15.14, 14.41, 14.92, 16.10 and 16.89 min respectively (Fig. 2). The system suitability results are given in Table and the developed method was found to be specific for Micafungin and its known impurities namely imp-A, imp-B, imp-C and imp-D.

FIG. 3: CHROMATOGRAM OF DILUENT (BLANK) IN THE OPTIMIZED CHROMATOGRAPHIC CONDITIONS 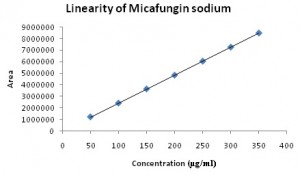 The developed analytical method was found to be specific as the peak purity index for Micafungin sodium was 999.11 in presence of all the spiked impurities i.e. Impurity A, Impurity B, Impurity C and Impurity D; and also the resolution was more than 1.5 between each peaks.

TABLE 3: ACCURACY RESULTS FOR MICAFUNGIN SODIUM AND ITS IMPURITIES

The relative standard deviation was found to be 0.083, 0.575, 0.817, 0.954 and 0.809 for Micafungin sodium, imp-A, imp-B, imp-C and imp-D respectively in the repeatability study. % RSD of peak area is less than 2.0 %, for all impurities and Micafungin sodium in the repeatability study (Table 4). Intraday and interday precision also exhibited % RSD less than 2 (Table 5). So the developed method is precise for its use.

Limit of Detection and Limit Quantitative

The LOD and LOQ values for Micafungin sodium was found to be 0.02 and 0.05 μg/ml. LOQ value was precised by six replicate injections with % RSD of 0.364 and checked for linear response with respect to other linearity levels by extending linearity curve upto LOQ level, with R2 of 0.9999. The chromatogram of Micafungin sodium at LOQ level is shown in Fig. 5.

With the minor modifications in the chromatographic conditions i.e. Flow rate, pH of mobile phase and temperature of column, the % assay was not affected and % RSD was found to be less than 2 % and the resolution between Micafungin sodium and Impurity B was not significantly affected (Table 6). Also with these minor modifications, System suitability parameters were also not affected and hence, the developed analytical method is robust.

System suitability parameters were calculated at the start of study of each validation parameter. The values of system suitability results obtained during the entire study are recorded. System Suitability values are from the first injection of six replicates of standard and are derived from Empower 3 software (Table 7).

CONCLUSION: A novel, reverse phase liquid chromatographic method has been developed and validated for the estimation of Micafungin sodium and its impurities namely impurity A, impurity B, impurity Candimpurity D with a very recent and advanced UPLC method. The proposed method is found to be simple, accurate, precise, sensitive, specific and robust. Hence, it can be successfully used for the routine analysis of Micafungin sodium in pharmaceutical dosage forms and can be also successfully utilized for estimation of Micafungin sodium and its related substances in bulk and in dosage form.

ACKNOWLEDGEMENT: The authors are thankful to Amneal Pharmaceuticals Pvt. Ltd., for providing the use of instruments and materials.