ABSTRACT: This manuscript describes a simple, sensitive, rapid and precise Ultra fast liquid chromatographic (UFLC) method was developed and validated for the simultaneous determination Clopidogrel and Rosuvastatin in human plasma according to USFDA draft guidelines. In the current study, the analysis was performed on phenomenex C8 (250 × 4.6mm, 5μm) column using phosphate buffer (pH-2.5) and acetonitrile (45: 55 v/v) as mobile phase at flow rate of 1.2 mL/min. In this developed method Clopidogrel and Rosuvastatin eluted at a retention time of 4.697 and 3.337 min respectively. The proposed method is having linearity in the concentration range from 10 to 50μg/mL of Clopidogrel and Rosuvastatin. The current method was validated with respect to linearity; precision, lowest limit of detection (LOD), accuracy and recovery according to the USFDA guidelines. The system consisted of a pump (Shimadzu, prominence, UFLC), with 20µl sample injector, along with a PDA detector at a wavelength of 243 nm and 220 nm for Rosuvastatin and Clopidogrel respectively. Data was compiled using Shimadzu LC Solution software. A good linear relationship over the concentration range of 10-50µg/ml was shown. Validation of the method was carried out as per the USFDA draft guidelines. The method developed was found to be precise, accurate, specific, linear and selective. Statistical analysis shows that the method is reproducible and selective for the estimation of Clopidogrel and Rosuvastatin in dosage form

INTRODUCTION: Clopidogrel, (CPG) (+)-(S)-methyl 2-(2-chlorophenyl)-2-(6, 7-dihydrothieno [3, 2-c] pyridin-5(4H)-yl) acetate (Fig. 1A) is a prodrug that is converted in the liver to an active thiol metabolite, which irreversibly inhibits the platelet P2Y12 adenosine diphosphate receptor. This bioactivation is mediated by hepatic cytochrome P450 isoenzymes, with cytochrome P450 2C19 playing a major role.

The cytochrome P450 (CYP) super family of heme enzymes plays an important role in the metabolism of a large number of endogenous and exogenous compounds, including most of the drugs currently on the market.

Inhibitors of CYP enzymes have important roles in the treatment of several disease conditions such as numerous cancers and fungal infections in addition to their critical role in drug-drug interactions.Given the important role of cytochrome P450 2C19 in the bioactivation of clopidogrel, drugs that inhibit this enzyme may reduce the antiplatelet effect of clopidogrel. It is used in the Prevention of vascular ischemic events in patients with symptomatic atherosclerosis, acute coronary syndrome without ST-segment elevation (NSTEMI), ST elevation MI (STEMI).

Rosuvastatin, (3R, 5S, 6E)-7-[4-(4-fluorophenyl)-2-(N-methylmethanesulfonamido)-6-(propan-2-yl) pyrimidin-5-yl]-3, 5-dihydroxyhept-6-enoic acid (Fig 1B) is a 3-hydroxy-3-methylglutaryl coenzyme A-reductase inhibitor, or statin, that has been developed for the treatment of dyslipidemia, atherosclerosis,  high cholesterol, hyperlipoproteinemia,  elevated  LDL,  Prevention of Cardiovascular Disease.

Rosuvastatin, a new statin, has been shown to possess a number of advantageous pharmacological properties, including enhanced HMG-CoA reductase binding characteristics, relative hydrophilicity, and selective uptake activity in hepatic cells. Cytochrome p450 (CYP) metabolism of Rosuvastatin appears to be principally mediated by the 2C9 enzyme, with little involvement of 3A4; this finding is consistent with the absence of clinically significant pharmacokinetic drug-drug interactions between Rosuvastatin and clopidogrel known to inhibit CYP enzymes.

FIGURE 1(B): STRUCTURE OF ROSUVASTATIN 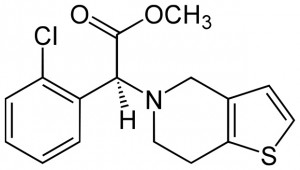 FIGURE 1(A): STRUCTURE OF CLOPIDOGREL

Studies have shown that the genetic polymorphisms in the hepatic cytochrome P450 (CYP2C19) influence the antiplatelet effects of clopidogrel. Moreover the same cytochrome partially metabolizes Rosuvastatin.

Literature survey reveals that few analytical methods have been reported for Rosuvastatin include has been estimated by colorimetry 12, Spectrophotometric methods 13, 14, LC-MS/MS 15, RP-HPLC16-21.

Samples of Clopidogrel and Rosuvastatin were received from Wintac Limited, Bangalore. The human plasma was received from JSS Hospital, Mysore, Karnataka, India. All the chemicals and reagents used were of analytical grade only. Milli-Q-water was used throughout the process, methanol, acetonitrile of HPLC grade were procured from Merck Chemical Laboratories, Bangalore, India.

The present study was carried out on UFLC(SHIMADZU) equipped with LC solutionsoftware with PDA detector. Separation was attained using phenomenex C8 column. Themobile phase was a mixture of potassium dihydrogen orthophosphate buffer (pH-3.0) and acetonitrile (40:60 v/v) at flow rate 1.2 mL/min. The contents ofmobile phase were filtered before use throughmembrane filter (0.45 μ). The optimized chromatographicconditions are shown in Table 1.

Mobile phase is prepared by adding 4.08g potassium dihydrogen orthophosphate in 250ml of Millipore water, dissolve and adjust the pH to 3.0 using ortho phosphoric acid and made upto 1000ml (0.03M) using Millipore water and acetonitrile in the ratio of 45: 55 (v/v).

Mobile phases were tried in various ratios for selection of solvents of desired polarity. The drugs clopidogrel and Rosuvastatin were injected with different mobile phases at different ratios and flow rates till a sharp peak, without any interference was obtained. The mobile phase selected with good resolution was phosphate buffer (pH 3), and acetonitrile in the ratio 45:55(v/v) (Fig 3).

The stock solution of clopidogrel and Rosuvastatin were prepared by dissolving 10mg of each separately into methanol and volume was made up to 100ml with same solvent. From stock solutions (100 μg/ml of each) 10, 15, 20, 25, 30, 35, 40, 45, 50 μg/ml concentration were prepared separately using methanol as solvent. Equal volumes of both concentrations were mixed and used as standard solutions.

From the stock solution (1000 μg/mL) aliquots of Clopidogrel and Rosuvastatin were pipette into a series of 10 mL volumetric flask. The final volume was made up to the mark by using HPLC grade methanol. 20μL solution was injected to the column and peak areas were measured and the calibration curve was obtained.

Linear correlations were found between peak ratios of Clopidogrel and Rosuvastatin and are described by regression equation. The Beer’s law was obeyed in the concentration range of 10 – 50 μg/mL (Figure 2). 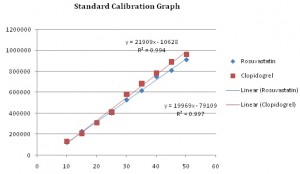 The regression parameters and system suitability of the method were shown in Table 2.

TABLE 2: THE REGRESSION AND SYSTEM SUITABILITY PARAMETERS OF THE METHOD

The obtained chromatograms are shown in Figure 3 (A and B). 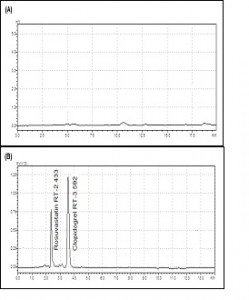 FIGURE 3: CHROMATOGRAM OF (A) BLANK, (B) CLOPIDOGREL AND ROSUVASTATIN IN PLASMA.

Since the UFLC method was developed, validation of the method by using various parameters was performed to ensure that the accomplishment of the method meets the requirements of the described bioanalytical applications. 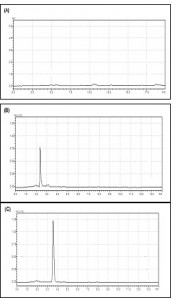 The accuracy of an analytical method is the percentage of relativeness between the conventional true value and the value obtained by that method. Accuracy is determined by replicate analysis of samples containing known amounts of the analyte. Accuracy was measured using a minimum of five determinations per concentration. The mean value was found to be within 20% of the actual value except at LLOQ, where it should not deviate by more than 25%.

Recovery of the method was performed comparing the three quality control (QC) samples at low, medium and high concentrations (10, 30, 50 μg/ml) The recoveries of clopidogrel and Rosuvastatin were determined by comparing peak area obtained for QC samples that were subjected to the extraction procedure with those obtained from blank plasma extracts that were spiked post extraction to the same nominal concentrations. The results obtained from the proposed method are recorded in Table 4.

To study short-term stability, the frozen (-22oC) and then thawed plasma samples were kept at room temperature for 6 h before sample preparation. The results obtained from these test samples were compared with those from freshly thawed and processed samples (reference samples). Long-term stability was determined after keeping spiked plasma samples frozen at -22oC for 1 month. For this stability test the samples (test samples) were analyzed and the results were compared with those obtained from freshly prepared and processed samples (reference samples). The stability in stock solutions was studied after storage at 2oC for 1 month. The results obtained from assessment of stability are given in Table 5. Three freeze–thaw cycles of the quality control samples did not seem to affect quantification. Quality-control samples stored in a freezer at -22oC were stable for at least 1 month. Thawing of the frozen samples and keeping them at room temperature for 6 h had no effect on quantification. The stability in stock solutions was confirmed after storage for 29 days at 2oC.

CONCLUSIONS: The developed and validated method involves simple and precise method for bioanalytical determination of Clopidogrel and Rosuvastatin in human plasma. This study showed that clopidogrel along with Rosuvastatin significantly decreased plasma level of clopidogrel.

Such a variation would lead to sub therapeutic concentration and a consequent lack of therapeutic efficacy of clopidogrel. This consequence may be expected due to inhibition of enzyme cytochrome P450 2C19 which is responsible for bioactivation of clopidogrel.

In conclusion, present study showed that Rosuvastatin can alter the pharmacokinetics of clopidogrel to significant levels. Summary of validation parameters data for Clopidogrel and Rosuvastatin is presented in Table 6.

TABLE 6: SUMMARY OF VALIDATION PARAMETERS DATA FOR CLOPIDOGREL AND ROSUVASTATIN

ACKNOWLEDGEMENTS: The authors express their sincere thanks to the Principal, JSS College of Pharmacy, Mysore and JSS University, Mysore for providing the necessary facilities to carry out the research work.