Determination of Absorption Maxima: By appropriate dilution of two standard drug solutions with Distill Water, solutions containing 10 μg/mL of CEF and 25 μg/mL of AZI were scanned separately in the range of 200-400 nm to determine the wavelength of maximum absorption for both the drugs. CEF showed absorbance maxima at 288 nm and AZI at 217 nm (Fig. 1). 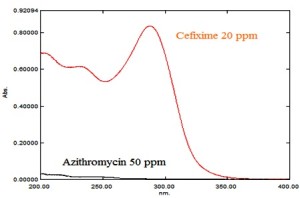 Derivative Spectroscopy: The Overlain spectra in Fig. 1 reveal that no method was possible in zero order. To overcome this, solutions of CEF (20 μg/mL) and AZI (50 μg/mL), were prepared separately by appropriate dilution of standard stock solution and scanned in the spectrum mode from 400 nm to 200 nm. The Zero order spectra of both the drugs were derivatised to first order (Fig. 2). 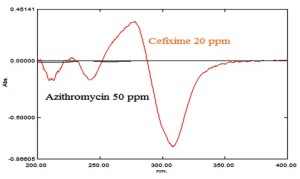 The Overlain spectra in Fig. 2 reveal that at the Zero Crossing Point (ZCP) of CEF, difficulty in recording absorbance of AZI. So, again the spectra were derivatised to 2nd order between 400-200 nm (Fig. 3). 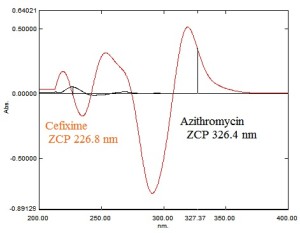 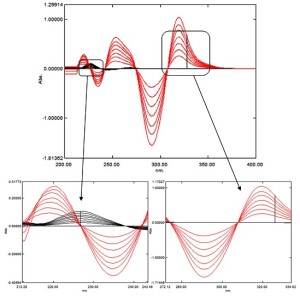 Validation: The methods were validated with respect to linearity, precision, accuracy, robustness, LOD & LOQ and assay.

Linearity: Standard stock solutions were prepared by dissolving 25 mg AZI and 10 mg of CEF in 100 ml volumetric flasks in 25 ml Methanol and the volume was made up with Distill Water to get a concentration of 250 μg/ml of AZI and 100 μg/ml of CEF. From this, suitable dilutions were made in Distill Water to get the working standard solutions of 25-100 μg/ml for AZI and 10-40 μg/ml for CEF. The absorbances of the derivatised spectra were measured at 226.8 nm and 326.4 nm for AZI and CEF, respectively. Five replicate analysis were carried out.

Precision: The precision of an analytical procedure expresses the closeness of agreement between a series of measurements obtained from multiple sampling of the same homogeneous sample under the prescribed conditions. The system precision is a measure of the method variability that can be expected for a given analyst performing the analysis and was determined by performing three replicate analyses of the same working solution.

Accuracy: Accuracy of the method was calculated by recovery studies at three levels (80%, 100% and 120%) by standard addition method. Twenty tablets were weighed and average weight was calculated. The tablets were crushed to obtain fine powder. Tablet powder equivalent to 10 mg CEF was transferred to 100.0 ml volumetric flask. 25 ml Methanol was added to dissolve the drugs and then volume was made up to the mark with Distill Water and sonicated for 10 minutes. The solution was then filtered through a Whatmann filter paper (No. 41). From the filtrate 1.0 ml was transferred to three 10.0 ml volumetric flasks and add 0.8 ml (Flask 1), 1.0 ml (Flask 2), and 1.2 ml (Flask 3) of stock solution of API and then made up to the mark with Distill Water to made them 80%, 100% and 120% spiking.

Robustness: The robustness of an analytical procedure is the measure of its capacity to remain unaffected by small, but deliberate, variations in method parameters and provides an indication of its reliability during normal usage. The parameters were change of volumetric flasks (10 ml, 50 ml and 100 ml) and Change in instrument (UV-Vis Spectrophotometer model no. 1800 and 2450). Three replicates were made for the same conc. (10 μg/ml of CEF and 25 μg/ml of AZI) in 10 ml, 50 ml and 100 ml volumetric flasks and the recording of absorbances were done on both the UV-Vis spectrophotometer. The result is expressed in Percentage RSD.

Assay: Twenty tablets were weighed and finely powdered. The average weight of tablets is determined with the help of weight of 20 tablets. A portion of powder equivalent to the weight of 10 mg of CEF was accurately weighed into 100 ml A-grade volumetric flask and 25 ml Methanol was added. The volumetric flask was sonicated for 20 min to effect complete dissolution of the AZI and CEF, the solution was then made up to volume with Distill Water. The solution was filtered through Whatman filter paper. The aliquot portion of the filtrate was further diluted to get final concentration of 25 μg/ml of AZI and 10 μg/ml of CEF. The % assay of the drugs was calculated. 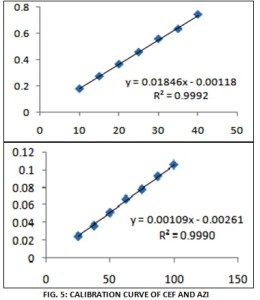 CONCLUSION: The developed method was novel, simple, accurate, precise reproducible, economical, which would be used to estimate CEF & AZI in their combined dosage form in routine analysis.