INTRODUCTION: Rosuvastatin calcium is chemically (3R, 5S, 6E)-7-[4-(4-fluorophenyl)-2-(N-methyl methane sulfonamido)-6-(propan-2-yl) pyrimidin-5-yl]-3, 5-dihydroxyhept-6-enoicacid. It is a competitive inhibitor of the enzyme HMG-CoA reductase, the rate limiting enzyme that converts 3-hydroxy -3-methylglutaryl mevalonate, precursor for cholesterol. It is a cholesterol lowering agent. Its approximate elimination half life is 19 hours and it’s time to peak plasma concentration are reached within 3–5 hours following oral administration.

But referring to the literature survey, there is no any published HPTLC method for Rosuvastatin calcium and Aspirin combined capsule form.

The present paper describes a simple, accurate and precise method for simultaneous estimation of Rosuvastatin Calcium and Aspirin in combined capsule dosage form.

The proposed method is optimized and validated as per the International Conference on Harmonization (ICH) guidelines 15. 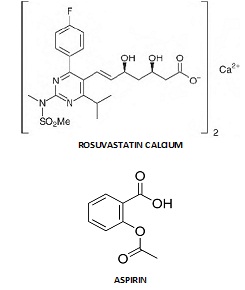 Preparation of Standard Solution: 10 mg of Rosuvastatin calcium (ROSU) and 75 mg Aspirin (ASP) were dissolved and diluted with methanol upto 100mL (100 µg/mL of ROSU and 750 µg/mL of ASP).

Preparation of Sample Solution: 20 capsules (UNISTAR*) were weighed with and without cap and capsule content was powdered. Powder equivalent to 10 mg of ROSU and 75 mg of ASP transferred into 100mL volumetric flask. Methanol was added to adjust level up to mark and sonicated for 30 min. The solution was filtered through whatman filter paper no. 42. First few mL of filtrate was discarded. The sample solution was used for estimation of ROSU and ASP. 6, 7 and 8 µL of sample solution was used for estimation purpose.

RESULTS AND DISCUSSION: Literature survey revealed that there was no any reported HPTLC method for simultaneous estimation of Rosuvastatin calcium and Aspirin. The present study was aimed at development of speedy and cost effective HPTLC technique for determination of ROSU and ASP in capsulated dosage forms.

Various blends of solvent systems in varying proportions were tried as mobile phase. However, mobile phase consisting n-Hexane: Ethyl acetate: Acetone: Formic acid in the ratio of (6: 3: 1: 0.4 v/v/v) was found to be more suitable with Rf values of 0.31±0.02 and 0.60±0.02 for ROSU and ASP, respectively with saturation time of 20 minutes. The selection of wave length was based on maximum absorbance for optimum sensitivity. The drugs showed good linearity in the range of 500-1000 ng/spot for ROSU and 3750-7500 ng/spot for ASP with coefficient of correlation value 0.995 and 0.995, respectively. From the recovery studies, the accuracy results were 99.88% for ROSU and 100.04% for ASP and were found to be highly accurate. 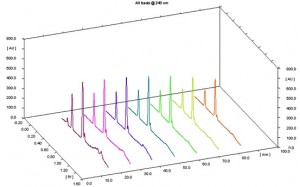 FIGURE 1: 3D VIEW OF ALL TRACKS OF LINEARITY FOR ROSUVASTATIN CALCIUM AND ASPIRIN