ABSTRACT: There are so many promising plant based chemical constituents are present which act as alternative therapy for the control of diabetes. But due to lack of its proper quality control parameters they are not widely used. The US FDA patent is approved for fixed dosage combination of Mangiferin (MF) and Berberin HCl (BER) as antidiabetic herbal formulation. Absorbance ratio method uses the ratio of absorbances at two selected wavelengths, one which is an iso-absorptive point and other being the λmax of one of the two components. From the overlay spectra of two phytomarkers, it is evident that MF and BER show an iso-absorptive point at 317 nm. The second wavelength used is 257 nm, which is the λmax of MF. The drug response with respect to absorbance was linear over the concentration range 5 - 30 μg/ml for MF and 10 - 60 μg/ml for BER. The percentage recovery of MF and BER as found to be 100.00% and 100.07% respectively. The method can be successfully employed for the simultaneous determination of MF and BER in pharmaceutical formulations. The developed method is validated as per ICH guideline Q2 (R1).

INTRODUCTION: The number of drugs and drug formulations introduced into the market has been increasing at an alarming rate. These drugs or formulations may be either new entities or partial structural modification of the existing ones or novel dosage forms. The US FDA US 7867979 B2 patent is approved for fixed dosage combination of MF and BER as antidiabetic herbal formulation 1 - 2. The literature review suggested that various HPLC, HPTLC and UV-visible Spectrophotometric methods have been reported for estimation of MF and BER individually or in combination with other drugs from pharmaceutical dosage form.

It is also revealed that no UV spectroscopic method has been reported in the literature review for the combination formulation of Mangiferin and Berberin HCl. The condition thus, provides the scope of development of accurate, sensitive, reproducible and simple Spectroscopic method capable of estimating both the drugs from the formulation simultaneously 3, 4, 5, 6, 7, 8, 9.

Preparation of Standard Solutions: To Prepare standard solution of MF (100 μg/ml) and BER (1000 μg/ml), accurately weigh 25 mg of each drugs were transferred in two different 100 and 10 ml volumetric flasks respectively, dissolve and diluted up to mark with methanol, from these stock solutions, 5 ml and 1 ml aliquots of MF and BER respectively were transferred in two different 10 ml volumetric flasks and were diluted up to mark with methanol to get working standard solution having concentration of MF of 50 μg/ml and BER of 100 μg/ml.

Methodology: Absorbance ratio method uses the ratio of absorbances at two selected wavelengths, one which is an iso-absorptive point and other being the λmax of one of the two components. From the overlay spectra of two drugs, it is evident that MF and BER show an iso-absorptive point at 317 nm. The second wavelength used is 257 nm, which is the λmax of MF. Working standards were prepared in methanol and the absorbances at 317 nm (iso-absorptive point) and 257 nm (λmax of MF) were measured and absorptivity coefficients were calculated using calibration curve. The concentration of two drugs in the mixture can be calculated using following equations.

Calibration Curve for MF and BER: To check linearity of the method, working standard solution having concentration in range of 5 - 30 μg/ml of MF and 10 - 60 μg/ml of BER were prepared from the standard stock solutions of both drugs. The absorbance was measured at 257 nm (λmax of MF) and at 317 nm (λmax of BER). Calibration curves were constructed by plotting absorbance vs. concentration.

Preparation of Sample Solution from Laboratory Prepared Synthetic Mixture: Synthetic mixture of MF (25 mg) and BER (75 mg) was prepared by using common excipients like corn starch (50 mg), Lactose (113 mg) and magnesium stearate (2 mg) per tablet. Tablet powder was prepared by calculating formula for 10 Tablets having label claim for MF and BER 25 mg and 75 mg respectively. From this mixture, powder equivalent to 45 mg BER was dissolved in 250 ml methanol and then sonicated for 15 min. and filtered through Whatman filter paper. From this solution, 2.5 ml aliquot was taken in 10 ml volumetric flask and diluted up to the mark with methanol to make final concentration of MF and BER, 15 μg/ml and 45 μg/ml, respectively which was used for assay.

Method Development: For this measurement, the solutions of MF and BER were prepared separately in methanol at a concentration of 15 μg/ml and 45 μg/ml respectively. They were scanned in the wavelength range of 200 - 400 nm. From the overlay spectra of two drugs, it is evident that MF and BER show an iso-absorptive point at 317 nm. MF showed 241 nm, 257 nm, 317 nm, 366 nm λmax from which 257 nm was selected as λmax of MF in this method due to good linearity Fig. 1.

Validation of the Proposed Method:

Calibration curve data of MF and BER shown in Table 1 and 2. Regression parameters are mentioned in Table 3 and the linearity spectra and calibration curves of these two drugs at 257 nm and 317 nm are shown in Fig. 3, 4 and 5, 6 respectively. 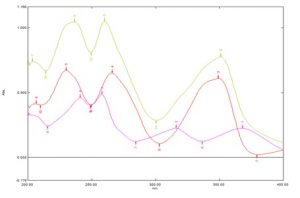 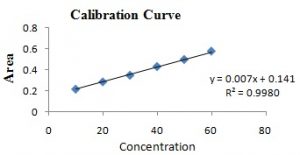 Analysis of Synthetic Mixture: Here, 15 μg/ml solution of MF and 45 μg/ml solution of BER synthetic mixture were prepared in triplicate manner and analyzed. The assay was carried out as per regression equation. The result of assay is shown in Table 9.

CONCLUSION: A new, simple, accurate, and precise UV spectroscopic method was developed for the simultaneous estimation of MF and BER in bulk drugs and in the presence of tablet excipients. The recovery studies suggested non-interference of formulation excipients in the estimation. Hence, the proposed method can be used for the quality control of the cited drugs and can be extended for routine analysis of the drugs in their pharmaceutical dosage forms.

ACKNOWLEDGEMENT: The authors wish to thank Enovate life Mumbai and PRS Herbal Haryana for providing Berberine HCl as gift sample. We would like to acknowledge Sardar Patel University, Vallabh Vidyanagar for providing seed grant to support this research work.