ABSTRACT: A simple, accurate rapid and precise RP-HPLC method has been developed and validated for determination of Hamycin and Ketoconazole in Pharmaceutical Cream. The RP-HPLC separation was achieved on Thermosil C-18, (250 mm, 4.6 mm, 5μm) using mobile phase 0.4 % ( v/v) diisopropylamine in methanol (v/v): 0.5% (w/v) Ammonium acetate in distilled water (90:10 % v/v) pH 6.5 adjusted with Glacial acetic acid at flow rate of 1.0 ml/min at ambient temperature. The retention times were 2.433 min. for Hamycin and 4.711 min. for Ketoconazole. Calibration plots were linear over the concentration range 50-250 μg/ml for Hamycin and 200-1000 μg/ml. Quantification was achieved with UV detection at 263 nm over the Beer-Lambert’s range.The method was validated statistically and applied successfully for the determination of Hamycin and Ketoconazole. Validation studies revealed that method is specific, rapid, reliable, and reproducible. The high recovery and low relative standard deviation confirm the suitability of the method for the routine determination of Hamycin and Ketoconazole in pharmaceutical cream. The proposed method was validated as per the ICH and USP guidelines.

It inhibits cytochrome P450 dependent lanosterol C14 demethylase, which is responsible for production of ergosterol, a necessary component in fungal cell wall synthesis 3, 4. Ketoconazole is a weak base with pKa values of 2.94 and 6.51 5. Ketoconazole is an antifungal drug approved by the US FDA in 1981. Only a few analytical methods for the determination of the drug in biological samples and in the presence of other drugs have been reported 6-10.

Hamycin is a polyene antimycotic organic compound. It is a heptaene antifungal compound rather similar in chemical structure to amphotericin B except that it has an additional aromatic group bonded to the molecule (figure 2). Hamycin is obtained from a strain of Streptomyces bacteria growing in soil i.e., Streptomyces pimprina. This compound is being produced in India by Hindustan Antibiotics Limited, located at Pimpri, Pune, Maharashtra, India. It is useful as an antifungal antibiotic drug for topical as well as systemic mycoses.

Diluent Preparation: The Mobile phase was used as diluent.

Preparation of standard solution: 10 mg of Hamycin and 40 mg Ketoconazole weighed and transferred to 100 ml volumetric flasks respectively. It was dissolved in the mobile phase consisting of 0.4% (v/v) diisopropylamine in methanol (v/v): 0.5% (w/v) Ammonium acetate in distilled water (90:10 % v/v) and the solutions were made up to mark with same mobile phase to obtain stock solutions of concentration 100 µg mL-1 of Hamycin and 400 µg mL-1  Ketoconazole each.

Preparation of sample solution: The sample solution was prepared by weighing accurately and transferred 2 gm of cream formulation which contain 10 mg of Hamycin and 40 mg of Ketoconazole into a 100mL clean dry volumetric flask. About 70mL of diluent was added to this and sonicated to dissolve it completely. Finally the volume was made to the mark with the same solvent.

Injection of Standards and Samples into the Chromatographic system: 20 µL of each standard and sample solution was injected into the chromatographic system and measured the areas of Hamycin and Ketoconazole peaks. %Assay of both the drug was calculated using the appropriate formulae.

System Suitability Results: To ascertain resolution and reproducibility of proposed chromatographic system for estimation of Hamycin and Ketoconazole in formulation system suitability parameters were studied.

System suitability parameters were calculated and are given in Table 2.

NMT – Not more than. NLT – Not less than 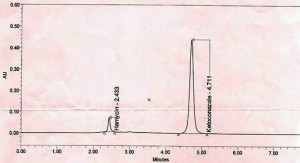 FIG 3: CHROMATOGRAM OF STANDARD MIXTURE OF HAMYCIN AND KETOCONAZOLE IN RATIO OF (1:4)

Linearity: The calibration curves were found to be linear and in adherence to Beer’s law over the concentration range of 50-250 µg mL-1 for Hamycin and 200-1000 µg mL-1 for Ketoconazole. The linearity was validated by the high values of the correlation coefficient. The results of the linearity studies are given in Table 3.

a)      Repeatability: The repeatability of sample application and measurement of peak area were expressed in terms of % R.S.D and was found to be less than 2 %.  The results of the same are given in Table No.4.

b)     Intermediate precision: The intermediate precision of sample application and measurement of peak areas were expressed in terms of % Relative Standard Deviation (% R.S.D.) and were found to be less than 2% for Hamycin and Ketoconazole indicating that the proposed method provides acceptable intra-day and inter-day precision. The results of the same are given in Table 5.

Accuracy: The accuracy study was performed at three different levels (80%, 100% and 120% of the test concentration). The mean % recoveries were found to be between 98–102% as required by ICH guidelines. The results of the recovery studies and its statistical validation data are given in Table 7 and Table 8 respectively.

DISCUSSION: A simple, specific, accurate, reproducible, precise and robust reverse phase high performance liquid chromatography method with UV detection at 263 nm has been developed for the simultaneous determination of Hamycin and Ketoconazole in formulation. Shimadzu LC2010 HPLC system was used for the analysis. Mobile phase consisted of a mixture of 0.4 %( v/v) diisopropylamine in methanol (v/v): 0.5% (w/v) Ammonium acetate in distilled water (90:10 % v/v) pH 6.5 with Glacial acetic was used.

The results of formulation analysis and recovery studies were statistically validated as per ICH guidelines indicating high degree of accuracy. The low % R.S.D. value of intraday and interday precision studies revealed high degree of precision of the proposed method. The low % R.S.D. value for robustness study suggests that the developed RP-HPLC method is unaffected by small changes in process parameters.

I owe a deep sense of gratitude and indebtedness to Mr. Sambhaji Patil, Plant Head, Genpharma International Pvt. Ltd, Pune   for providing me with all the excellent facilities for completion of my research work.

Words are less to express my deep heartfelt gratitude to my guide Dr. R.K. Nanda, for his constant guidance, encouragement with which he has equipped me to complete this project. I extend my deepest sense of gratitude for his inspiration and time he has spared despite his very busy schedule, will always be a part of immortal reminiscences and remain idol throughout my life.