A simple, rapid, precise, accurate, sensitive and time consuming reverse phase high performance liquid chromatography (RP-HPLC) and spectrophotometric method for simultaneous estimation of atorvastatin and amlodipine in pharmaceutical dosage forms have been developed and validated. Drug was resolved on a C18 column (Phenomenex phenyl hexyl column, 250mm* 4.6mm i.d, 5um). Utilizing mobile phase of water with 0.4%v/v triethyl amine and acetonitrile with diluted orthophosphoric acid pH adjusted to 5.2 in a ratio of 52.5:47.5 of water and acetonitrile respectively. Mobile phase was delivered at the flow rate of 1.0ml/min. Ultraviolet detection was carried out at 229nm. Separation was completed within 7.75 minutes. Calibration curve was linear with correlation coefficient (r2)=0.999. Over a concentration range 5-25ug/ml, using diclofenac 10ug/ml as IS. Recovery was between 99.26, 100.2 percentage. In spectrophotometric method it involves the formation and solvation of simultaneous equation at 242nm for Atorvastatin and 256nmfor Amlodipine using Acetonitrile and Water (10:90) as mobile phase. The standard deviation was found to be less than 1% for the assay of tablet. The proposed methods were successfully employed for the estimation of Atorvastatin and Amlodipine in combined tablet formulation. 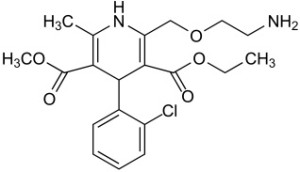 FIGURE 1: STRUCTURE OF ATORVASTATIN AND AMLODIPINE

MATERIALS AND REAGENTS: Atorvastatin and Amlodipine standards were obtained from Zydus Medica Laboratories, Ltd. (Ahmedabad, India), methanol, acetonitrile and buffer (HPLC grade) were obtained from Qualigens Fine Chemicals (Mumbai, India). The (A2) tablets (Zydus Medica laboratories) of the combination of atorvastatin and amlodipine were purchased commercially. Double distilled water was used throughout the experiment. Other chemicals used were have analytical or HPLC grade.

Chromatographic Conditions: A chromatographic system prominence consisting of quaternary solvent delivery pump, a degasser and column oven and photodiode array detector, LC20-AT series, C18 (4.6*250) mm, 5 micron column was used. The instrumental settings were a flow of 1Ml/min. The injection volume was 10ul. The detection wavelength was 229 nm for all three analytes.The peak purity was checked with the photodiode array detector from LC20-AT.

Preparation of Standard Solution: 10 mg of Amlodipine was taken in a 10 ml standard flask. To this 2 ml of mobile phase was added for dissolving the drug. Shake it for one min, to get a clear solution and make up the volume to 10 ml with mobile phase (stock solution A).

10 mg of Atorvastatin was taken in a 10 ml standard flask and diluted with few ml of mobile phase until the sample dissolves completely and make up the volume to 10 ml with mobile phase (stock solution B).

The internal standard solution was prepared by taking 10 mg of diclofenac in a 10 ml standard flask. It is dissolved by adding 3 ml of mobile phase, shake it for few minutes to get a clear solution and make up the final volume to 10 ml with mobile phase.

The final standard solution was prepared in such a way that each standard flask contains 5, 10, 15, 20 and 25 mg of amlodipine and atorvastatin and 10mg of diclofenac (IS).

Preparation of Formulation Solutions: Twenty tablets containing 5 mg of each amlodipine and atorvastatin were weighed and finely powdered. From the powdered tablets, a quantity of powdered equivalent to 10mg was weighed. Then, was extracted with 25ml of mobile phase the solution was then filtered and diluted to 1000µg/ml with mobile phase. From this final dilution were prepared which contain each 10µg/ml of both drugs and internal standard.

Preparation of Standard Stock Solution: Standard stock solution of Atorvastatin and Amlodipine was prepared by weighing each 10mg of atorvastatin and Amlodipine were, transferred to a 10ml volumetric flask and volume made to 10ml with to get a concentration of 1mg/ml, with acetonitrile and water in the ratio of (10:90) from this solution, an aliquot of 1ml was withdrawn, and it was further diluted to 10ml with water (100ug/ml).

Preparation of Standard Solution: For the preparation of calibration curves, stock solution of Atorvastatin and Amlodipine in the concentration range of 7.5-37.5µg/ml was taken respectively for Atorvastatin and Amlodipine. For both drugs 0.75ml, 1.5ml,  2.25ml, 3.ml and 3.75ml were withdrawn from standard stock solution contain (100µg/ml) and make to 10ml with water so that  concentration of these solution contain 7.5µg/ml,  15µg/ml, 22.5µg/ml, 30µg/ml, 37.5µg/ml.

Preparation of Sample Solution: Twenty Tablets of brand A2 (Zydus Medica), label claim 5mg of Atorvastatin, and 5mg of Amlodipine were weighed, average weight determined and finely powdered. Appropriate quantity of powder from each tablet equivalent to 5mg were weighed and finely powdered. The mixture was then extracted wit acetonitrile and water, then extract was filtered through Whatmann filter no. 41 and filtrate was appropriately diluted to get final concentration 7.5µg/ml to 37.5µg/ml. Absorbance of this solution was measured at 242nm and 256nm.

Method: Two wavelength selected to frame the simultaneous equation method were at 242nm and 256nm since these two wavelength ratio of the absorptivity of two component or maximum. For calibration curves, stock solutions of Atorvastatin and Amlodipine in the concentration of range of 7.5 – 37.5μg/ml respectively. The absorbance of this atorvastatin and amlodipine was measured at 242nm, and 256nm calibration curve were plotted (Fig. 2, 3). The absorptive of both the drugs at both the wave length were determined.

The absorbance and the absorptivity values at the particular wavelength were calculated and substituted in the following equation, to obtain the concentration. 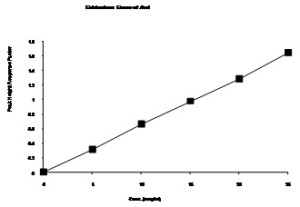 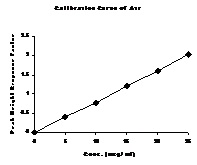 Results and Discussion of HPLC and Spectrophoto-metric Method:

The precision of the method was determined by studying repeatability and reproducibility. The response factor of drug peaks and percentage relative standard deviation were calculated and presented in Table 3 & 4. The results revealed that the method developed is reproducible.

The standard drug solutions in varying concentrations ranging from 50 to 150% of the targeted level of the assay concentration containing internal standard were examined by the assay procedure. The linearity and range for both the drugs was found to be from 5 to 25 mg/ml.

Estimation: Estimation of Atorvastatin and Amlodipine in dosage forms by High Performance Liquid Chromatography was carried out using optimized chromatographic conditions. The standard and sample solutions were prepared and chromatograms were recorded. The peak area ratios of standard and sample solutions were calculated. The assay procedure was repeated for 6 times and mean peak area, mean peak area ratio, mean weight of standard drugs, mean weight of sample taken for assay were calculated. The percentages of individual drugs found in formulations, mean, and standard deviation in formulations were calculated and presented in Table 2. The results of analysis shows that the amount of drugs was in good agreement with the label claim of the formulation.

Determination of Active Ingredients in Tablets: The contents of two drugs in tablets were determined by the proposed method using the calibration curve. The results are shown in Table 5. The chromatogram of the tablet sample is shown in (Figure 4). 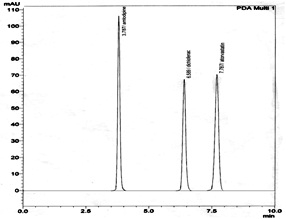 Repeatability of injection: A standard solution of mixture of drugs was   injected  6 times and its % RSD was calculated, table 4.

The response factor, slope, intercept and correlation coefficient values were calculated. The correlation coefficient of Atorvastatin and Amlodipine were found to be 0.9990 and 0.9997 respectively. The calibration curves were plotted using response factor Vs. concentration of the standard solutions (Fig. 4 and 5). The calibration graph shows that linear response was obtained over the range of concentrations used in the assay procedure. These data demonstrates that the methods have adequate sensitivity to the concentration of the analytes. The range demonstrates that the method is linear outside the limits of expected use.

TABLE 3: LINEARITY AND RANGE IN HPLC

HPLC: The scope and objective of the present work is to optimize the chromatographic conditions, to develop HPLC& spectrophotometric method for the estimation of drugs in selected multi-component dosage form and the same is validated 5-16.

Various solvent systems were tried among which water and (0.4%v/v Triethylamine): Acetonitrile with ratio 52.5:47.5, pH 5 was selected as mobile phase, which gave good resolution and peak shapes. The flow rate was set at 1.0 ml/min. detection was carried out by PDA detector at 229nm. Quantitation was done by internal calibration method. At the optimum conditions mentioned above, Diclofenac was selected as internal standard for the analysis.

The developed HPLC method requires less time, no tedious extraction procedure were involved, run time were less than 10 min, suitable for the analysis of raw material.

Hence, the chromatographic method developed for atorvastatin and amlodipine is said to be simple, precise and accurate that can be effectively applied for routine analysis in research institutions, quality control department in industries, approved testing laboratories, bio-pharmaceutics and bio-equivalence studies and in clinical pharmacokinetic studies.

Spectrophotometric Method: The proposed methods were successfully used to estimate the amount of Atorvastatin and Amlodipine, present in  the marketed tablet formulations The assay values for both the tablets were compared with corresponding labeled amounts and the validation parameters of proposed methods are summarized inTable 6 & 7. The result of analysis has been validated statistically and by recovery studies. The standard deviation was found to be less than 1% for the assay of tablet. The method was found to be simple, accurate, rapid and economical and proposed method can be employed for the routine analysis of tablets.