ABSTRACT:  A Simple, sensitive, precise, accurate, and specific reversed –phase high-performance liquid chromatography (RP-HPLC) method was developed and validated for the determination of levofloxacinin pharmaceutical tablets. Levofloxacin is a third generation fluoroquinolones with a wide spectrum of action against gram-positive and gram-negative bacteria, anaerobic microorganisms and atypical pathogens. It is pure (-)-(S)-enantiomer of the racemic drug substance ofloxacin, which was introduced in 1997.  Isocratic chromatography was performed on a C18 column with acetonitrile‐methanol‐phosphate buffer 0.1M15:25:60 (v/v/v) as mobile phase at a flow rate of 1 ml/min. UV detection was set at 287 nm. The fluorescence detector was set at excitation/emission wavelengths of 300/500 nm. The method was validated with respect to accuracy, linearity, precision, and selectivity. All the parameters examined met the current recommendations of U.S.P (30) for analytical method validation. The method can be reliably used for routine quality control analysis and to determine the levofloxacin content of marketed tablets.

Therefore, in the present investigation an attempt has been made to determine levofloxacin in dosages formusing RP‐HPLC without internal standard. Method validation procedure (linearity, precision, accuracy, and selectivity) was based on the recommendations of U.S.P 30 for analytical methodvalidation13, 14.

Preparation of standard and stock solutions:

Twenty tablets (which were previously subjected to mass uniformity test) were weighed and finely powdered. Amass equivalent to 100 mg of levofloxacin was weighed and transferred in a 100 ml volumetric flask, mixed with distilled water, and sonicated for 30 minutes. The solution was filtered through 0.45μ filter paper. The filtrate was transferred to a 100 ml volumetric flask and diluted to the mark with buffer. For detection using UV detector, Stock solution of levofloxacin 1 mg/ml was prepared in buffer and diluted further to obtain standard solution of 40μg/ml.

For detection using fluorescence detector, Stock solution of levofloxacin 1 mg/ml was prepared in buffer and diluted further to obtain standard solution of 5μg/ml. The solution of the samples was injected in triplicate and chromatographed.

Selectivity of the method was assessed by preparing tablet powder without levofloxacin with the same excipients as those of in the commercial formulations. For RP‐HPLC the solutions were prepared using the same procedure as for the standard solution.

Optimization of the chromatographic conditions:

In order to develop a suitable and valid LC method for the determination of levofloxacin, various chromatographic conditions were employed using different mobile phases. The system containing acetonitrile‐methanol‐phosphate buffer 0.1M 15: 25:60 (v/v/v) as a mobile phase at a flow rate of     1ml/min was found to be satisfactory and gave well resolved peak for levofloxacin. 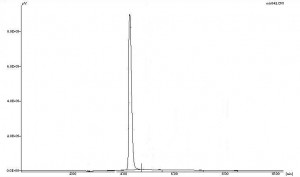 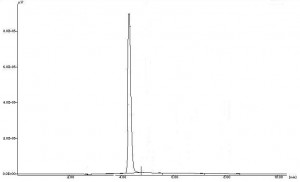 Validation of the developed methods

Calibration data for levofloxacin using UV detector was shown in Table 1. The linearity plot of levofloxacin was found to be linear. The linear equation and correlation coefficient were: Y=9.18x-1.46, 0.996 respectively (Figure 4). This demonstrates the suitability of this method for the analysis of levofloxacin in tablets.

Calibration data for levofloxacin using fluorescence detector was shown in Table 2. The linearity plot of levofloxacin was found to be linear. The linear equation and correlation coefficient were: Y= 9.295X + 0.3066, 0.9997 respectively (Figure 5). This demonstrates the suitability of this method for the analysis of levofloxacin in tablets. 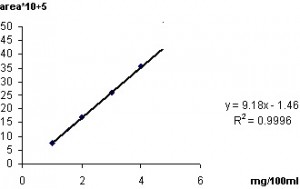 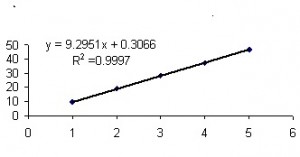 The purity of analyte peak and the RSD value of < 2 indicate that the method is selective for analysis of levofloxacin in its dosage form (Table 7, 8).

Determination of levofloxacin in tablets:

The developed method was applied for the determination of levofloxacin in tablets. The results of these assays ranged from 97.8% to 100% and from 97.6% to 102% of the claim concentration (Table7, 8) using UV and fluorescence detector respectively. The results indicated that the method is selective for the assay of levofloxacin without the interference of the excipients used in the tablet.

An accurate, fast, sensitive, and precise isocratic reverse phase high performance liquid chromatographic method has been developed for the determination of levofloxacin in tablet dosage form. The developed method was found to be simple and have short run time which makes the method rapid. Several studies in the literature for the determination of the tested compound depends on UV, HPTLC or volumetric methods, few used HPLC upon then less used RP‐HPLC. Nevertheless, the results of the study indicate that the developed HPLC method is simple, precise, accurate and less time consuming.

ACKNOWLEDGMENT: Many thanks for the coworkers in faculty of pharmacy at Damascus University ‐Syria for their help and support.