Categories Menu
Home » DEVELOPMENT AND VALIDATION OF RP-HPLC METHOD FOR QUANTIFICATION OF BETULINIC ACID IN VITEX NEGUNDO L. AND ITS POLYHERBAL FORMULATIONS

DEVELOPMENT AND VALIDATION OF RP-HPLC METHOD FOR QUANTIFICATION OF BETULINIC ACID IN VITEX NEGUNDO L. AND ITS POLYHERBAL FORMULATIONS

DEVELOPMENT AND VALIDATION OF RP-HPLC METHOD FOR QUANTIFICATION OF BETULINIC ACID IN VITEX NEGUNDO L. AND ITS POLYHERBAL FORMULATIONS

ABSTRACT: The Vitex negundo, which is traditional Indian medicine, has been used for treatment of various diseases. A simple, sensitive, precise and accurate RP-HPLC method has been developed for the analysis of Vitex negundo L. samples and its polyherbal formulations for their Betulinic acid content. The extraction was checked using different solvents like methanol, chloroform, 95% ethanol, acetone and dichloromethane. It was found chloroform was good extraction solvent that allowed extraction of Betulinic acid with highest content. The method involves RP C18 column with methanol-acetonitrile-water (90:5:5 % v/v/v) pH 2.5 adjusted with ortho phosphoric acid as mobile phase and UV detection at 270 nm. The flow rate was 1.3 ml/min. The retention time was 2.29 min. The linearity range was 5-30 μg/ml. The method was validated for linearity range, precision, LOD, LOQ, robustness and accuracy. Mean recovery was 99.16-100.76 %. The method was successfully applied for the quantification of Betulinic acid in leaves, seeds of Vitex negundo L. and its polyherbal formulations. The results demonstrated that the content of Betulinic acid was depending on different extraction solvents and ensure its clinical benefits. The content of total triterpenoids was also determined by colorimetry method.

INTRODUCTION: The Vitex negundo, which is traditional Indian medicine, of Verbenaceae family, has been used for treatment of various diseases. It is used in the treatment of inflammation, fungal diseases, antioxidant and hepatoprotective disorders 1, 2. Betulinic acid (3β-hydroxylup-20-(29)-en-28-oic acid) is a penta­cyclic triterpenoids and is common constituent of many medicinal plants and herbs. The structure of Betu­linic acid is shown in Fig. 1. 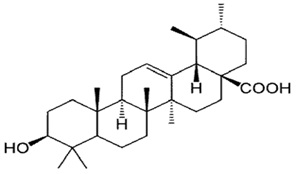 Betulinic acid is white to slightly being rose powder, highly soluble in pyridine, acetic acid, soluble in methanol, ethanol, chloroform, ether and low solubility in water, petroleum ether, DMF, DMSO and benzene 3. They have many important pharmacological effects like anti-inflammatory, hepatoprotective, anti-tumor, anti-HIV, anti-microbial, anti-gastric ulcer and anti leukemic properties 4-7. A literature survey described that RP-HPLC 8-11, HPTLC 12-18 methods were developed for the determination of Betulinic acid in the various plant samples and formulations, but no RP-HPLC method has been reported for estimation of Betulinic acid in plant samples and polyherbal formulations containing Vitex negundo. Hence, this paper described RP-HPLC for estimation of Betulinic acid and colorimetry method for total triterpenoids in plant samples of Vitex negundo L. and its herbal formulations.

The leaves of Vitex negundo collected from the L. M. College of Pharmacy, Ahmedabad, Gujarat. Reference standard of Betulinic acid (HPLC purity >98.0 %) was purchased from Sigma aldrich, Bangalore, Karnataka, India. HPLC grade acetonitrile and methanol were used for the HPLC analysis. Milli-Q water was used by the Milli-Q system.  All other solvents used in this study were of analytical grade. Seed powder of Vitex negundo and marketed polyherbal formulations were purchased from the local market, India.

Quantification of Betulinic acid by RP-HPLC:

A standard solution of Betulinic acid (50µg/ml) was prepared by dissolving 0.5 mg of accurately weighed Betulinic acid in methanol and the volume was made up to 10 mL with methanol.

Suitable aliquots of standard solution of Betulinic acid were transferred to vials separately and volume was made up to 2 ml with methanol. The above standard solutions were injected and run for calibration curves. Calibration graph was plotted subsequently for linear regression analysis of peak area with concentration.

Extraction and preparation of sample solutions:

Analysis was performed on Kromasil 100 RP C18 (5 µm, 250×4.6 mm i.d.) column using an isocratic mobile phase comprising Methanol-Acetonitrile-Water (90:5:5 % v/v/v) pH 2.5 adjusted with orthophospharic acid. The flow rate was maintained at 1.30 ml/min and temperature of the column was kept at room temperature. The samples were injected in a volume of 20 μL and detection was carried out at 270 nm.

The method was validated according to International Conference on Harmonization guidelines for validation of analytical procedures.

The linear response was determined by analyzing six independent levels of the calibration curve in the range of 5-30 μg/ml for Betulinic acid. Result should be expressed in terms of Correlation co-efficient.

Calibration curve was repeated 5 times and the standard deviation (SD) of the intercepts (response) was calculated. Then LOD and LOQ were measured by using mathematical expressions.

Accuracy expressed as % Recovery by the assay of known, added amount of analyte.  Its measure of the exactness of the analytical method. The recovery experiments were carried out in triplicate by previously analyzed test samples with three different concentrations of standards at 80%, 100% and 120% respectively.

Robustness of the method were determined by performing small changes in the mobile phase ratio, wavelength detection and flow rate. The results indicated insignificant differences in results and thus indicative of a robust method.

The parameters used in these were asymmetry of chromatographic peak, Theoretical plates, and retention time.

The determination of total triterpenoids was determined by colorimetric method19 with the following procedure. Initially, a stock solution of Ursolic acid (500μg/ml) was prepared. From above solution a suitable aliquot (0.1, 0.2, 0.3, 0.4 and 0.5 ml) were transferred to 10 ml of test tube, respectively. 0.2 ml of 5% vanillin–acetic acid and 1.2 ml of perchloric acid were added, mixed and incubated at 70o C for 15-20 min. Then after tubes were taken out and cooled in running water for 2 min then, acetic acid was added to make up the volume up to 5 ml. The absorbance was taken at 550 nm against blank. The calibration curve was constructed by absorbance versus concentration of Ursolic acid standard (µg/ml).

Study the effect of extraction solvent on content of Betulinic acid and total triterpenoids:

This developed RP-HPLC method was subsequently applied for determination of Betulinic acid and colorimetric method was applied for determination of total triterpenoids in leaves of Vitex negundo respectively, with different extraction solvents (methanol, chloroform, 95 % ethanol, acetone and dichloromethane) and to compare the extraction efficiency.

Initially various mobile phases, flow rate and detection wavelength were tried for HPLC analysis to attempt best chromatograph in Methanol-Acetonitrile-Water (90:5:5 v/v/v) pH 2.5 adjusted with Orthophospharic acid on Kromasil 100 RP C18 column at flow rate of 1.3 ml/min and detection was at 270 nm. The chromatograph of Betulinic acid standard and sample solutions were shown in Fig. 2 & 3 respectively. The retention time was 2.29 min. 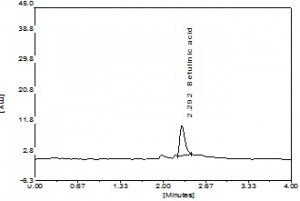 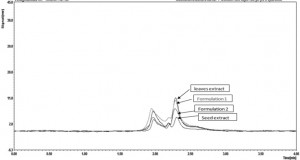 The linearity data of standard Betulinic acid is shown in Table 1. The calibration curve for Betulinic acid was obtained by plotting the peak area of Betulinic acid versus concentration over the range of 5-30 μg/ml and it was found to linear with r2=0.990 (Fig. 4).

The LOD and LOQ were found to be 0.144 and 0.436 respectively. The % RSD for intraday and inter day precision were found to 0.501 and 0.795 respectively (Table 2 and 3). The results of accuracy were 99.16-100.76% (Table 4). The % RSD for different parameters of robustness was found to less than 2% (Table 5). The proposed HPLC method was applied to the quantification of Betulinic acid in plant samples of Vitex negundo and its herbal formulations. The result of system suitability was shown in Table 6. The content of Betulinic acid in leave sample, seeds sample, formulation 1 and 2 were 0.060 %, 0.031 %, 0.043 and 0.041 % respectively (Table 7). The summary of regression analysis and validation parameters was shown in (Table 8).

TABLE 7: ASSAY RESULTS OF PLANT SAMPLES OF VITEX NEGUNDO AND ITS FORMULATIONS 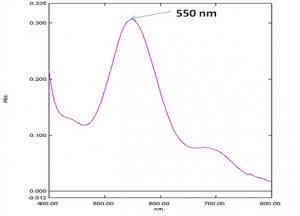 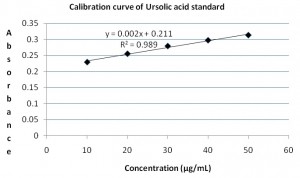 Result of effect of extraction solvents

The results of different extracting solvent on content of Betulinc acid and total triterpenoids were shown in Table 9. The results shown that content of both were strongly dependent on the solvents with different polarities. Chloroform and methanol were good extraction solvent that allowed extraction of Betulinic acid and total triterpenoids with a higher yield compared with the other extraction solvents. The extraction of acetone, 95 % ethanol and dichloromethane were rather small.

TABLE 9: YIELD OF BETULINIC ACID AND TOTAL TRITERPENOIDS IN THE LEAVES OF VITEX NEGUNDO WITH DIFFERENT EXTRACTION SOLVENTS

CONCLUSION: The developed RP-HPLC method was accurate, precise, sensitive, reproducible and simple for quantification of the Betulinic acid in plant samples and its herbal formulations. The spectrophotometric method was successfully applied for estimation of total triterpenoids in plant samples and its herbal formulations, which was simple, rapid, accurate, precise and reproducible. Significant variations in the content of Betulinic acid and total triterpenoids in Vitex negundo leaves with different extraction solvents were observed. Therefore, in order to ensure and improve the therapeutic benefits, it is necessary to quantify bioactive components in the leaves of Nagod derived extracts and herbal formulations.

ACKNOWLEDGMENTS: The authors would like to thank K. B. Institute of pharmaceutical education and research, Gandhinagar to provide reagents and instruments facility for proposed work.