DEVELOPMENT AND VALIDATION OF RP-HPLC METHOD FOR SIMULTANEOUS ESTIMATION OF MONTELUKAST SODIUM, LEVOCETIRIZINE DIHYDROCHLORIDE AND ACEBROPHYLLINE IN FIXED-DOSE COMBINATION TABLETS

DEVELOPMENT AND VALIDATION OF RP-HPLC METHOD FOR SIMULTANEOUS ESTIMATION OF MONTELUKAST SODIUM, LEVOCETIRIZINE DIHYDROCHLORIDE AND ACEBROPHYLLINE IN FIXED-DOSE COMBINATION TABLETS

ABSTRACT: A fixed-dose combination of montelukast sodium, levocetirizine dihydrochloride, and acebrophyl line is used in the treatment of asthma, COPD, allergic rhinitis and other conditions where patients feel difficulty in breathing. The present study was designed to develop and validate a simple, sensitive, precise and accurate isocratic reverse-phase high-performance liquid chromatography (HPLC) method for simultaneous estimation of montelukast sodium (MTKT), levocetrizine dihydrochloride (LTZ) and acebrophyl line (ABP) in fixed-dose combination tablets. Chromatographic separation of these drugs was achieved on Hypersil ODS C18 column (250 × 4.6 mm, 5µm) as stationary phase. A mixture of methanol, acetonitrile and 20 mM ammonium acetate buffer in the ratio of 60:30: 10v/v was used as the mobile phase at a flow rate of 0.8 ml/min with detection at 232 nm at a column temperature set at 35 ℃. The total elution time for the three drugs was about 10 min. The developed method was validated by conducting system suitability, selectivity, linearity, precision, accuracy, limits of detection, and limits of quantification as per ICH guidelines. The method was accurate with assay values of 99.89% w/w for LTZ, 100.30% w/w for ABP and 100.59%w/w for MTKT, precise with intra-day and inter-day % RSD less than 2% and robust with % RSD less than 2% for the three drugs. The developed method can be applied to simultaneously quantify fixed-dose combination products containing LTZ, ABP and MTKT.

This reduces bronchoconstriction and results in less inflammation. Because of this mechanism of action, it is used in the treatment of acute asthma attack. Levocetirizine (LTZ) is a third-generation non-sedative antihistamine indicated to relieve symptoms associated with seasonal and perennial allergic rhinitis 2.

Acebrophyl line (ABP), a mixture of theophylline-7-acetate and ambroxol is a mucolytic and bronchodilator used in the treatment of asthma and chronic obstructive pulmonary disease. It works by relaxing the airway muscles and also loosens mucus, making it easier to breathe 3, 4.

Preparation of Diluent: A mixture of methanol: 20 mM ammonium acetate buffer pH 5.5: acetone trile was prepared in the ratio of 1:1:1 to be used as a diluent.

Preparation of Standard Stock Solution: 10 mg each of MTKT, ABP, and LTZ standards were accurately weighed and transferred to respective 100 ml clean, dry volumetric flask to which 80 ml of methanol was added and sonicated for 5 min and made up to the volume with methanol to obtain a concentration of 100 µg/ml of each drug.

Preparation of Sample Solution: 20 tablets were weighed and crushed. A powder equivalent to 2 mg of LTZ, 80 mg ABP, and 4 mg MTKT was weighed and transferred to 100 ml volumetric flask to which an additional 4 mg standard of LTZ and MTKT was added. 75 ml of methanol was added to the flask and was sonicated for 15 min. Later volume was made up to the mark using methanol. The sample solution was then filtered through 0.45 µm Whatman filter paper. 1 ml of this filtrate was then transferred to a clean dry 10 ml volumetric flask and made up to the mark using a diluent to produce 6 µg/ml of LTZ, 8 µg/ml of MTKT, and 80 µg/ml of ABP.

Chromatographic Conditions: Chromatographic conditions were selected to better separate drugs with the minimum time required for analysis. Chromatographic separation was achieved on the Hypersil ODS C18 column (250 × 4.6 mm, 5 µm) as stationary phase. The mixture of methanol, acetonitrile, and 20 mM ammonium acetate buffer in the ratio of 60:30: 10v/v was used as a mobile phase at a flow rate of 0.8 ml/min. The UV detection was carried out at 232 nm with column temperature set at 35 ℃.

RP-HPLC Method Development and Optimization Studies: Preliminary trials using different columns, varying mobile phase compositions, varying flow rates at several wavelengths were employed for simultaneous estimation of MTKT, LTZ, and ABP in a fixed dose combination product. The wavelength of 232 nm was selected as it was found to produce less noise, gave good resolution, peak purity, peak symmetry. Out of the several methods tried a method giving better separation of drugs was finally obtained. This method was further optimized to curtail the tailing effect to obtain better peak shape with a good number of theoretical plates. System suitability study was then conducted using standard preparation and evaluated after every 6 injections. Several validation parameters such as specificity, linearity, LOD and LOQ determination, precision, accuracy, and robustness were then performed to validate the developed method for its intended use. A typical RP-HPLC chromatogram for simultaneous determination of ABP, LTZ, and MTKT from standard preparation is shown in Fig. 1.

FIG. 1: CHROMATOGRAM OF ABP, LTZ AND MTKT IN STANDARD SOLUTION

Method Validation Studies of Optimized Analytical Method: The developed RP-HPLC method was validated for parameters like 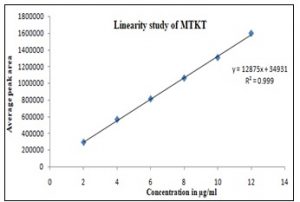 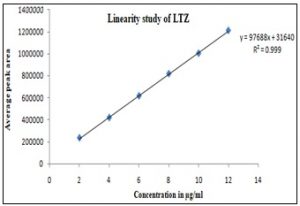 Specificity Studies: Specificity is the ability to assess the analyte unequivocally in the presence of components that may be expected to be present such as impurities, degradation product and excipient.

Specificity was determined by injecting blank and placebo samples and was analyzed for any inter-ference. No peaks/interferences were observed at the retention time of the three drugs. The analytical method was found to comply with the acceptance criteria indicating that the developed method was specific.

Linearity Studies: A concentration range of 2-12 µg/ml for MTKT and LTZ and 20-120µg/ml for ABP was selected for linearity studies. The linearity studies of MTKT, LTZ, ABP were performed in triplicate. A calibration curve was obtained by plotting the average peak area of each drug against each concentration level is shown in Fig. 2, Fig. 3, Fig. 4 and Fig. 5. 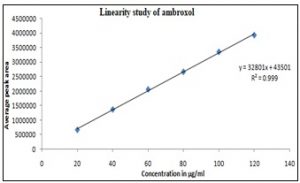 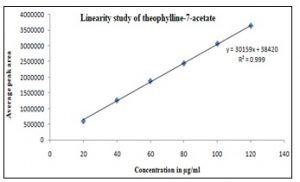 The linearity studies indicated in Table 2. exhibited an excellent correlation between average peak area and concentration for all the drugs.

The correlation coefficient for the three drugs was found to be greater than 0.999, which meets method validation acceptance criteria, and thus, the method was said to be linear for all three drugs.

Limit of Detection (LOD) and Limit of Quantitation (LOQ) Study: The LOD and LOQ were determined based on the standard deviation of y-intercept and slope of a regression line. LOD and LOQ were calculated by using the formulae given below

Where, σ is the standard deviation of the response and S is the slope of the calibration curve.

Precision Studies: Repeatability study, intraday precision study at different time points and interday precision study on three consecutive days were carried out for MTKT, LTZ and ABP at concentration of 10μg/ml, 10μg/ml and 20μg/ml respectively. % RSD was calculated from the average peak area obtained. The results obtained are presented in Table 3.

Accuracy Studies: To ensure the reliability and accuracy of the method, recovery studies were carried out for all the drugs at three different levels by using the standard addition method.

Robustness Study: The robustness of an analytical procedure measures its capacity to remain unaffected by small but deliberate variations in method parameters and indicates its reliability during normal usage. A deviation of ± 2 ℃ in column temperature, ± 0.2 ml/min in flow rate and ± 0.1 pH of the buffer, were tried individually. A standard solution mixture of MTKT, ABP and LTZ (10 μg/ml, 20 μg/ml, 10 μg/ml, respectively) was injected into the specified changes in operational conditions instrument in triplicate. % RSD was reported in Table 8.

CONCLUSION: The proposed RP-HPLC method was found to be simple, accurate, precise, robust, and rapid the method was found to give good separation between the three compounds with a short analysis time. Hence the method can be used in quality control laboratories with respect to routine analysis for the assay of tablets containing MTKT, LTZ, and ABP.