ABSTRACT:This study describes development and subsequent validation of a reversed phase high performance liquid chromatographic (RP-HPLC) method for the estimation of ursodeoxycholic acid used to solubilize cholesterol gallstones, in conventional tablet dosage formulation and in prepared dosage form. The chromatographic system was achieved in a BDS Hypersil C8 column (Thermo, 250mm x 4.6 mm, 5 µ) with an isocratic mobile phase comprising of methanol, water and phosphoric acid (77:23:0.6 v/v). Since the drug shows moderate absorption only in the short UV wavelength region (200-210 nm), quantification of the amount released from the pharmaceutical preparations by simple UV spectrophotometry is hampered by possible interferences from formulation excipients and dissolution medium components.  A new method has been developed utilizing the above mobile phase and detection in refractive index (RI) detector. In this chromatographic condition ursodeoxycholic acid was eluted about 3.0 min with no interfering peaks of excipients used for the preparation of dosage forms. The method was linear over the range from 240-360 µg/mL in raw drug (r2 = 0.995). The intra-day and inter-day precision values were in the range of 0.144 - 0.332 % and 0.166 - 0.292 % respectively. Limit of detection (LOD) and limit of quantitation (LOQ) were 0.6 µg/mL and 2 µg/mL respectively. Results were validated according to International Conference on Harmonization (ICH) guidelines in marketed and prepared tablet formulation. The validated HPLC method is simple, sensitive, precise, accurate and reproducible.

INTRODUCTION: Ursodeoxycholic acid (UDCA) is a white, odorless, crystalline powder with a bitter taste. Chemically it is 3α, 7β-dihydroxy-5-cholan-24-oic acid (Fig. 1). It is a water insoluble drug used as a drug for the dissolution of cholesterol gallstones 1, 2, 3 because it reduces the cholesterol saturation of bile 4. The use of UDCA for the treatment of other liver diseases, such as primary biliary cirrhosis, chronic hepatitis and biliary pains has been demonstrated 5, 6, 7.However in vivo studies have shown that intestinal absorption and consequently the bioavailability of the drug are generally poor and erratic both among different subjects, and within the same subject 8. More than 50% is lost in the stool 9 after a single oral dose of 300 mg. 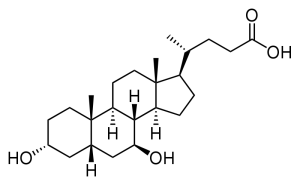 UDCA is commercially available as tablets and capsules. Since UDCA shows moderate absorption only in short UV wavelength region i.e. 200-210 10, quantification of the amount released from the pharmaceutical preparations by simple UV spectrophotometry is hampered by possible interferences from formulation excipients and dissolution medium components 11.High Performance Liquid Chromatography (HPLC) method of its assay utilizing refractive index detector has been reported in United States Pharmacopoeia 12 using acetonitrile and water as mobile phase. Analytical determination of this drug was carried out by Giunchedi 13 by modifying the HPLC method described earlier by Scalia 14. HPLC determination of UDCA has also been reported with Electron Capture Detector (ECD) detector 15. No paper has been found to report development and validation of this drug using refractive index detector.

The objective of the present study was to develop a simple, precise, accurate and validated RP-HPLC method for the estimation and routine analysis of UDCA in raw drug and in commercially available dosage forms. This proposed HPLC assay for determination of UDCA has not yet been reported and therefore, this study claims to be a novel one. The results of the analysis were validated according to ICH guidelines 16.

Preparation and characterization of UDCA tablets:

Tablets preparation: The immediate release UDCA tablet was done by wet granulation method. The required amount of the drug, MCC (diluent) and SSG (super disintegrant) were mixed in geometrical order. Then the binders Povidone and PEG 6000 were added above to prepare granules. These granules were dried in the oven to obtain the loss on drying value as 3.2-3.6 % and then sieved through 22# sized mesh. The granules after treating with magnesium stearate (antiadherent) and talc (lubricant) were then compressed in CIP, 8 station, single rotary, “D”-Tooling machine of punch size 11.9 mm. The tablets were then film coated with ethyl cellulose (EC) and hydroxypropyl methyl cellulose (HPMC) mixed with the plasticizer PEG 6000 and titanium dioxide as opacifier.

Tablets characterization: The tablets obtained were convex shaped with an upper punch break line. The average weight of the tablets varied from 530 ± 7.5 % mgwith thickness 4.6-4.7 mm. The disintegration test value was less than 15 minutes. Friability test data was not more than 1%.

Instrumentation and Chromatography: The HPLC system was of a Waters (USA), consisting of a solvent delivery pump (Model No. 515), a refractive index detector of Waters (Model No. 2414) with Empower 2software for integration. Separation was achieved using a BDS Hypersil C8 column (Thermo, 250 mm x 4.6 mm, 5 µ). The isocratic mobile phase pumped at a flow rate of 1 mL/min consisted of methanol, water and phosphoric acid (77:23:0.6 v/v). The freshly prepared mobile phase was filtered through 0.45 µm filter (Millipore, Milford, MA, and U.S.A) and degassed by sonication for 15 min. The injection volume was 25 µL and all the separations were performed at room temperature using refractive index detector set at temperature 40οC with sensitivity 64.

Standard preparation: Stock solution (1mg/mL) of UDCA was prepared in methanol. Nine standard solutions of UDCA between 240-360 µg/mL were prepared from the stock by subsequent dilution using the mobile phase.

Sample preparation for assay and recovery study:  For the analysis of the dosage form, 10 Ursocol tablets containing 300 mg of UDCA was purchased. The tablets were weighed to calculate the average weight of the tablet. Then the tablets were crushed and then an amount equivalent to 300 mg was taken in a 100 mL volumetric flask. Methanol (analytical grade) was added and shaken thoroughly to extract the drug from the excipients. The solution was filtered through Whatmann filter paper (No. 41). A volume of 1 mL was pipetted out and the final volume was made up to 10 mL with the mobile phase to prepare a concentration of 300 µg/mL. The same treatment was carried out with prepared tablet dosage form. After suitable dilution, the drug concentration with six replicates for the marketed and prepared tablet dosage form was determined by HPLC using the calibration curve. The recoveries were determined by adding known amounts of UDCA reference substance (240, 300 and 360 µg) to the formulated samples. A recovery exercise was then performed.

Method validation: The method was validated according to the ICH guidelines for the validation of analytical procedures. The parameters which were used to validate the method of analysis were linearity range, limit of detection (LOD), limit of quantification (LOQ), specificity, accuracy, precision and recovery.

RESULTS AND DISCUSSION: The chromatographic conditions were optimized and separation was performed on a BDS Hypersil C8 (Thermo) column using a mobile phase consisting of methanol, water and phosphoric acid. The proposed mobile phase composition allowed suitable retention time of UDCA and achieved good selectivity towards interference from the excipients of the formulation. Under the chromatographic conditions described, UDCA was eluted about 3.0 min. Good baselines and well shaped peak can be observed (Fig. 3). Calibration curve was constructed using standard UDCA solutions in the range of 240-360 µg/mL. The linearity of the calibration curve (Fig. 2) was validated by high value of correlation coefficient (r2 = 0.995). 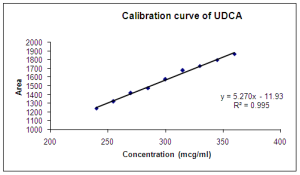 FIG. 3: CHROMATOGRAM OF URSODEOXYCHOLIC ACID IN FORMULATION WITH RT ABOUT 3.188 MINUTES

The limit of detection (LOD) and the limit of quantitation (LOQ) were 0.6µg/mL and 2 µg/mL respectively.  Low value of LOD and LOQ indicate the method is sensitive. The specificity of the proposed method demonstrated that the excipients present in marketed formulation and in the prepared formulation do not interfere with the drug peak. Furthermore, well-resolved peaks indicate the specificity of the method (Fig 3). Thus the proposed method is useful to quantify UDCA in different pharmaceutical formulations. The precision was determined by analyzing nine different concentrations of the bulk drug on three different days. The intraday and interday precisions were calculated as 0.144-0.332 % and 0.166 - 0.292 % whereas the accuracy were calculated as 100.097-100.448 % and 100.073 - 100.346 % as shown in Table 1. The accuracy of the formulation was tested by assaying the marketed formulations and the prepared tablet dosage form on the same day and three different days. The results of formulation assay are shown in Table 2. Recovery results exceed 100% for the tested formulations.

CONCLUSION: The described HPLC method provides simple, sensitive, precise, accurate and reproducible quantitative method for routine analysis of UDCA in tablet dosage form. Simple sample preparation procedure and a retention time less than 5 minutes make this method unique and suitable for analyzing a number of samples in a short period. The formulations assays were within the acceptable limit. High percentage of recovery (Table 3) ensures the method to be free from interference of excipients and additives, used in the formulations.

ACKNOWLEDGEMENT: We are grateful to All India Council of Technical Education (AICTE), Govt. of India, for financial assistance and to Bioequivalence Study Centre, Jadavpur University, Kolkata, India to utilize its resources to carry out this entire research work. We are very much thankful to Indian Institute of Chemical Biology (IICB), Kolkata, India for providing us their instrumental facilities. Authors are also grateful to Albert David Ltd., Kolkata, West Bengal, India for sending ursodeoxycholic acid as gift sample.