A simple, accurate, sensitive, reproducible and cost – effective spectrofluorimetric method was developed for the estimation of voglibose in bulk and pharmaceutical formulations. The solvent systems, wavelengths of detection (excitation and emission) were optimized in order to maximize the sensitivity and minimize the cost of analysis for voglibose. Derivatization procedure was employed for analysis. Voglibose showed strong native fluorescence in Methanol having excitation at 282 nm and emission at 345 nm. Effect of different solvents was thoroughly investigated. All parameters like the effect of different solvents, pH, dilutions, reaction time, temperature and effect of excipients were thoroughly investigated. The linear regression equations obtained by least square regression method for Fluorescence Intensity (FI) and concentration in ng/ml. The calibration curve was linear in the range from 100 to 350 ng/ml .The developed method was successfully employed with high degree of precision and accuracy for the estimation of total drug content in commercial tablet formulation of Voglibose (volix).The results of analysis were treated statistically, as per International Conference On Harmonization (ICH) guidelines for validation of analytical procedures, stability studies and by recovery studies. The percentage recovery was found to be in between 98.0 % to 98.5 %. The results were found to be in good agreement with the label claims.

INTRODUCTION: Voglibose (Fig. 1), 3, 4-Dideoxy- 4- [2- hydroxy- 1- (hydroxyl methyl) ethyl]amino- 2- c- (hydroxymethyl)- D-epiinositol, has attracted considerable interests due to its wide range of therapeutic and pharmacological properties, including its excellent inhibitory activity against α- glucosidase and its action against hyperglycaemia and various disorders caused by hyperglycaemia. Voglibose, a new potent glucosidase inhibitor used for type- 2 diabetes, has shown strong anti-obesity and anti-diabetic activity. As a glucosidase inhibitor, the compound exerts its activity within the gastrointestinal tract of humans. The drug delays glucose absorption and thus, reduces the post-prandial blood glucose peaks 1- 3. Voglibose obtained from organic synthesis processes is similar to structurally related carbohydrates found naturally 4, 5 and has the empirical formula C10H21NO.

Voglibose was derivatized in order to increase the sensitivity of detection 6. The derivatization was based on the imination (-C= N-) of carbonyl group (-C= O) of voglibose, which was produced by oxidation of the hydroxy methyl group (-CH2-OH) by sodium periodate, with the primary amino group of a fluorophore such as taurine. The main advantage of taurine as a labeling agent is its capability of facilitating highly sensitive fluorescence detection of trace amounts. A survey of literature has not revealed any simple spectrofluorimetric method for estimation of voglibose in pure form and in pharmaceutical dosage form. Fluorescence detection has been preferred due to the interference evident in the chromatograms from UV detection. The objective of the present study therefore was to develop a simple, sensitive, rapid, precise, accurate, effective and cost-effective spectrofluorimetric analytical methods with better detection / quantification level and devoid of complications and cost of the method were developed for estimation of voglibose in pure form and in their pharmaceutical dosage forms. The developed method was used to estimate the total drug content in commercially available tablets of voglibose (volix). The results of the analysis were validated by statistical methods and as per USP 7, ICH 8 guidelines. The results of analysis were further validated by recovery studies.

Method development: Different solvent systems were used to develop a rugged, quick and suitable spectrofluorimetric method for the quantitative determination of voglibose in pure form and in their formulations. The final decision on the suitability of a solvent system for method development of the voglibose was based on cost, sensitivity, solvent noise (fluorescence), quenching effect of the solvent, sample preparation time and steps involved, adaptability of the method for estimation of drugs in their pharmaceutical dosage form and minimization of interference from commonly employed excipients in pharmaceutical formulations.

Selection of Solvent: Methanolic solution of voglibose shown higher fluorescence intensity than other solvents, hence methanol was chosen as the solvent.

Calibration Curve: Stock solutions of the drug prepared by dissolving 10 mg of drug in 100 ml of methanol to get a final concentration of 100 µg/ml and derivatized using taurine and sodium periodate. The excitation wavelength and emission wavelength of voglibose in methanol were determined by scanning a suitable dilution of the stock in high pure methanol using the scanning spectrofluorimeter. From the stock solution, various dilutions were made using high pure methanol to obtain dilutions of 50, 100, 200, 400, 600, 800 and 1000ng/ml and the fluorescence intensity was measured for each dilution. 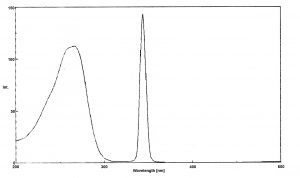 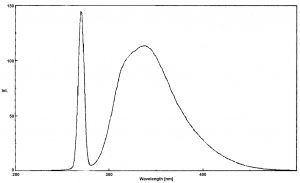 The excitation wavelength and emission wavelength of voglibose in methanol were determined by scanning a suitable dilution of the stock using the scanning spectrofluorimeter. From the stock solution, various dilutions were made using the above solvent system to obtain solutions of 100, 150, 200, 250, 300 and 350 ng/ml, and fluorescence intensity was measured for each dilution. The PMT gain mode was kept at medium for all determinations. The calibration curve values for the voglibose by the proposed method were listed in Table 1.

RESPONSE TIME: As the excitation and emission bandwidth were fixed as 10 nm and at different responses the fluorescent intensities were measured. The solution of 100 ng/ml of Voglibose in methanol was used for the study. Response time of 0.05 was selected. (Table 3)

SENSITIVITY: As the excitation and emission bandwidth were fixed as 10 nm and at different responses the fluorescent intensities were measured. The solution of 100 ng/ml of Voglibose in methanol was used for the study. Sensitivity was fixed as medium hence fluorescence intensities and linearity was satisfactory. (Table 4)

Linearity 11: A stock solution of Voglibose 1000µg/ml was prepared. For establishing linearity, six separate series of solutions of the drug, 50 to 1000 ng/ml were prepared from the stock solution; derivatized and analyzed. Linearity of the method was conformed by plotting calibration concentration of the drug (i.e. sensitivity) vs. fluorescence intensity. The linearity in the selected medium (methanol) was found to range in between 100 - 350 ng/ml. The correlation coefficient (r2) was found to be 0.999. The graphical representation of linearity is depicted in figure 4. 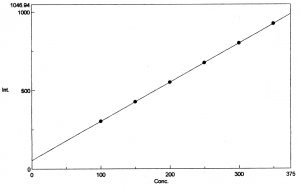 Accuracy (Recovery studies): Recovery studies were done at two different levels; i.e. 50% and 100%. Recovery studies were performed to keep an additional check on the accuracy of the developed assay methods. Known amount of pure drug was added to pre-analyzed samples of commercial dosage forms. The percent analytical recovery was calculated by comparing concentration obtained from the spiked samples with actual added concentration. The percentage recovery levels lies in between 98.0% to 98.5%. Recovery results demonstrated that the proposed method was unaffected in the presence of formulation excipients and thus highly accurate. The results of recovery were shown in Table 5.

Analysis of Commercial Formulation: Twenty five tablets each containing 0.2 mg of Voglibose were weighed, powdered and a quantity equivalent to 5 mg of Voglibose was transferred into a 100 ml volumetric flask, extracted using methanol and made up to the volume with the same. This drug solution was extracted through Whattmann filter paper. Suitable aliquots from the extract were analyzed with the fixed experimental conditions and fluorescence intensities were recorded. The amount of Voglibose present in the sample was found by the method of least squares. The results of analysis of commercial formulation were shown in Table 6.

Stability Studies: The stability of the drug solution was carried out. It was found to be stable at room temperature 11 hrs, and at refrigeration 26 hrs. (Table 9)

RESULTS AND DISCUSSION: Methanolic solution of Voglibose gave higher fluorescence intensity than in other solvents, hence methanol was chosen as the solvent. The excitation and emission wavelengths were found to be linear between 100 to 350ng/ml; with r2 = 0.999.  The percentage recovery studies revealed that the recovery levels lie between 98.0% and 98.5%. The % RSD for intra- and inter- day variations in the analysis was found to be stable for 11 hrs at room temperature and 26 hrs at refrigeration.

CONCLUSION: The proposed spectrofluorimetric method for estimation of Voglibose was found to be accurate, precise, and easier compared to other reported methods. The proposed method was valid with respect to linearity, sensitivity, accuracy, reproducibility and precision. The developed method was reproducible and stable, which indicated that this method can be useful for routine quality control of Voglibose in bulk and its solid dosage forms. The sample recoveries in all the investigated formulations were in good agreement with their respective label claims, indicating non-interference of excipients during the spectrofluorimetric estimation of drug.

ACKNOWLEDGEMENTS: The authors are thankful to Dr. Mahesh D. Burande, Bilcare Research Academy and Mr. Vinod Arora, Vice President, R&D, Ranbaxy for providing samples of drug. I would also extend my thanks to Mr. Nagaraj, Medical Representative, Ranbaxy, Coimbatore for supplying the formulation on time.