ABSTRACT: A simple and sensitive visible spectrophotometric method is described for the assay of risperidone (RSP) in pure and solid dosage forms. The method involves oxidative coupling of risperidone with MBTH in presence of ferric chloride dissolved in HCl and apple green chromogen is formed and exhibits absorption maxima at 595.8nm. Regression analysis of Beer-Lambert plots showed good correlation in the concentration ranges (10-80) μg/mL. Regression coefficient was found to be 0.992. The proposed method is applied to commercial available tablets and the results are statistically evaluated and validated by recovery studies.  The proposed methods have been successfully applied to the analysis of the bulk drug and its tablet dosage form. The methods have been statistically evaluated and were found to be precise and accurate.

INTRODUCTION: Risperidone 1 is an antipsychotic drug which is mainly used to treat schizophrenia (including adolescent schizophrenia), schizoaffective disorder, the mixed and manic states associated with bipolar disorder, and irritability in people with autism. Risperidone belongs to the class of atypical antipsychotics 2. It is a dopamine antagonist possessing antiserotonergic, antiadrenergic and antihistaminergic properties. Many analytical methods like spectrophotophotometry 2-4 HPLC 5-10 , LC –MS 11, 12 , HPTLC 13,polarography 14 and have been reported for the determination of Risperidone.

Reagents and Standards: All the reagents used were of analytical grade and the solutions were freshly prepared. The reagents used in this method are triple distilled water, methanol, 0.1N HCl, MBTH (0.3%) and FeCl3 (1%) .

Stock Solution: The solution 1mg/ml (1000mcg/ml) was prepared by dissolving accurately about 0.1 g of drug in 100ml of distilled water.

Preparation of MBTH Reagent: 0.3gm of MBTH reagent was dissolved in 100ml distilled water and made up to the volume to 100ml.

Preparation of Ferric Chloride Solution: 1gm of FeCl3 was dissolved in 0.1N HCl and made up to the 100ml with 0.1N HCl.

PROCEDURE: Into a series of 10ml volumetric flask , 1ml of MBTH (0.3%) and 0.8ml FeCl3 (1%) and 0.1 – 0.8ml of working standard solution (1mg/ml) were added separately. The absorbance of apple green chromogen was measured at 595.8nm against reagent blank. The amount of risperidone present in the sample solution was computed from its calibration curve. The spectrum was shown in figure 1. 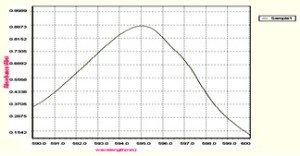 Preparation of Sample Solution: 20 tablets of commercial samples of risperidone were accurately weighed and powdered. The tablet powder equivalent to 50 mg of risperidone was dissolved in 5 ml of methanol and made up to volume with distilled water. The solution was filtered and analyzed as given under the assay procedure for bulk samples. None of the excipients usually employed in the formulation of tablets interfered in the analysis of risperidone by the proposed method. The standard graph was plotted by taking conc. of drug on x – axis and absorbance on y– axis and was shown in figure 2. Results of regression analysis was given in table 9.

Procedure for assay of drugs in Dosage Forms: Ten tablets of commercial samples of Risperidone were accurately weighed and powdered. An amount of powder equivalent to 50mg was weighed separately and made upto 50ml with distilled water. The solution was filtered and subjected to recommended procedure for the determination. The results were displayed in table 8.

RESULTS AND DISCUSSION: The presence of amino group in RSP enabled oxidative coupling with MBTH and FeCl3 to form green colored chromogen in this method exhibiting λmax at 595.8 nm. The Beer’s law was obeyed for this method in the concentration ranges of 10-80 µg/ml respectively. The optical characteristics such as Beer’s law limits (µg/ml), Molar extinction coefficient (L/mol.cm), Regression equation (y), Correlation coefficient was calculated and reported in Table 9.

To evaluate the validity and reproducibility of the method, known amount of pure drug was added to the previously analyzed pharmaceutical preparation and the mixtures were analyzed by the proposed method. The percent recoveries are given in Table 2.

*Average of three determinations; ** After spiking the sample

CONCLUSION: The developed method is simple, rapid, selective and inexpensive and exhibits a fair degree of precision and accuracy. The present methods involve the formation of highly stable colored species which makes it easier for the determination of risperidone from pharmaceutical dosage forms in a routine manner. The method does not involve any critical reaction conditions. The proposed method can serve as an alternative method for the routine analysis of RSP in pure drug and in pharmaceutical formulations.