ABSTRACT: A simple and sensitive UV spectrophotometric method has been developed for the quantitative estimation of trimetazidine in bulk drug and pharmaceutical dosage forms (tablets). Trimetazidine exhibited absorption maximum at 269 nm in 0.1 N HCl and obeyed Beer’s law in concentration range 5-25 µg/ml. The result of analysis in this method has been validated statistically and by recovery studies. This method is extended for the analysis of drug in pharmaceutical formulations.

INTRODUCTION: Trimetazidine 1,chemically 1-[(2,3,4-trimethoxyphenyl)methyl] piperazine, (figure 1)is a cellular acting anti ischemic agent. It acts by inhibiting mitochondrial long chain 3-KAT, thus favoring glucose oxidation at the expense of fatty acid oxidation. This drug is official in IP and BP. From literature review it is known that several spectrophotometric 2, 3, HPLC 4, 5, HPTLC  methods 6 have been developed for the determination of trimetazidine.

Though modern methods of analysis for purity, assay of any drug afford simplicity, speed, good specificity and excellent precision and accuracy, they involve sophisticated instruments which are not in the reach of most laboratories and small scale industries. So an attempt was made to develop simple, sensitive UV spectrophotometric method for the quantitative estimation of trimetazidine in bulk drug and pharmaceutical dosage forms. In this method, trimetazidine exhibits absorption maximum at 269 nm in 0.1 N HCl and obeyed Beer’s law in concentration range 5-25 µg/ml.

The result of analysis in this method has been validated statistically and by recovery studies. The method is extended for the analysis of drug in pharmaceutical formulations.

Working standard of Drug Solution: A 1mg/ml solution of trimetazidine was prepared by dissolving 100mg of Trimetazidine in 100 ml of distilled water. From this solution 1ml was taken into a 10ml volumetric flask and diluted to the volume with distilled water to produce a concentration of 100µg/ml.

Sample preparation: Ten tablets of commercial samples of Trimetazidine were accurately weighed and powdered. An amount of powder equivalent to 50mg was weighed separately and add 10ml of 0.1N HCl. shake vigorously and dilute to 50 ml with 0.1N HCl. The solution was filtered.

Assay: Prepare 20µg/ml solution from previously prepared 1mg/ml solution of sample by using 0.1N HCl. The absorbance was measured and it was compared with that of the standard. Total content present and the % purity were calculated.

Optimization of Reaction conditions: The optimum conditions for quantitative estimation of the drug were established via a number of preliminary experiments.

Selection of Solvent: The solubility of Trimetazidine was determined in a variety of solvents as per Pharmacopoeial standards.  Solubility tests for Trimetazidine were performed using various solvents. As per solubility, HCl was selected as a solvent to develop the method.

Selection of detection Wavelength: Sensitivity of the method depends upon the proper selection of wave length. An ideal wave length is one that gives good response for all the components to be detected.

Trimetazidine solution of concentration 15µg/ml was prepared from standard stock solution using 0.1N HCl and it was scanned between 200 to 400 nm. The λ max of Trimetazidine was found to be 269 nm.  The spectrum was shown below in fig. 2. 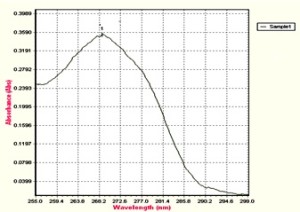 Validation: Validation is one of the most important steps in method development for analytical determinations. The main validation parameters such as linearity and range, accuracy and precision, LOD, LOQ, ruggedness were evaluated for the developed method.

Limit of quantification was calculated using the formula;

Where σ is standard deviation and s is the slope.

Assay: The method was applied to marketed formulation and the amount found in the sample solution was found. Results were given in table 7.

RESULTS AND DISCUSSION: The optical characteristics such as absorption maxima, Beer’s law limits, molar absorptivity are presented in Table 8.The regression analysis using the method of least squares was made for the slope (b), intercept (a) and correlation(r) from different concentrations and results are summarized in Table 8. The results showed that this method has reasonable precision. 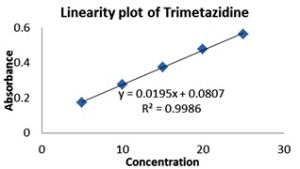 % Recovery was found to be within the limits. This indicates that the method is accurate.

% RSD was found to be within the limits. This indicates that the method is rugged.

% RSD was found to be within the limits. This indicates that the method is robust.

CONCLUSION: The proposed method is found to be simple, sensitive, selective, economical, accurate and precise and can be used for the determination of trimetazidine in bulk drug and its pharmaceutical dosage forms in a routine manner