INTRODUCTION:Cefpodoxime proxetil (CPD) (Figure 1) is chemically, 1-(isopropoxy carbonyloxy) ethyl (6R, 7R)-7-[2- (2-amino- 4- thiazolyl)- (z)- 2- (methoxyimino) acetamido]-3-methoxymethyl-3-cephem-4-carboxylate 1, is a third generation cephalosporin antibiotic. It is used for infections of the respiratory tract, urinary tract and skin and soft tissues 2. Cefpodoxime proxetil is official in IP and USP. IP 3 and USP 4 describe liquid chromatography method for its estimation. Literature survey reveals HPTLC 5 method for the determination of CPD. Literature survey also reveals RPHPLC 6 and spectrophotometric 7 methods for determination of CPD with other drugs. Ofloxacin (OFL) (Figure 2) is chemically, 9-fluro-2-3 dihydro-3-methyl-10-(4-methyl 1- piperazinyl) - 7- oxo- 7H- pyrido [1, 2, 3-de] 1, 4benzoxazine-6-carboxylic acid 8, is a fluoroquinolone antibacterial agent used in the treatment of chalmydia or chlamydophila infections including nongonococcal urethritis and in mycobacterial infections such as leprosy 9.

It is official in IP, BP and USP. IP 10, BP 11 and USP 4 describe potentiometric method for its estimation. Literature survey reveals first derivative fluorescence spectroscopy 12, HPLC with fluorescence detector for estimation of ofloxacin in human plasma 13. Literature survey also reveals spectrophotometric 14, RP-HPLC and HPTLC 15 methods for determination of OFL with other drugs. The combined dosage forms of CPD and OFL are available in the market and used in Urinary tract infection and Typhoid. The combination of these two drugs is not official in any pharmacopoeia; hence no official method is available for the simultaneous estimation of CPD and OFL in their combined dosage forms. Literature survey does not reveal any simple spectrophotometric or chromatographic method for simultaneous estimation of CPD and OFL in combined dosage forms. The present communication describes simple, sensitive, rapid, accurate, precise and economical spectrophotometric method based on simultaneous equation for estimation of both drugs in their combined tablet dosage forms. 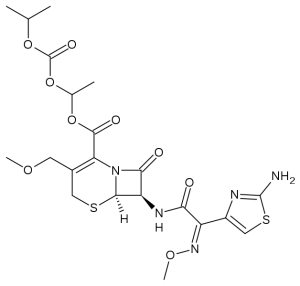 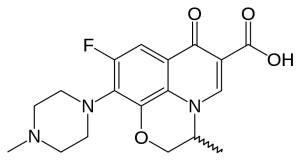 Apparatus: A Shimadzu model 1700(Japan) double beam UV/Visible spectrophotometer with spectral width of 2 nm, wavelength accuracy of 0.5 nm and a pair of 10 mm matched quartz cell was used to measure absorbance of all the solutions. Spectra were automatically obtained by UV-Probe system software (UV Probe version 2.31). An Electronic analytical balance (Acculab) and an ultrasonic bath were used in the study.

Preparation of standard stock solution: An accurately weighed quantity of CPD (10 mg) and OFL (10 mg) were transferred to a separate 100 ml volumetric flask and dissolved and diluted to the mark with methanol to obtain standard solution having concentration of CPD (100 μg/ml) and OFL (100 μg/ml).

Accuracy: Accuracy was determined by calculating recovery of CPD and OFL by the standard addition method. From working sample solution of test (100 μg/ml of both), 0.5 ml of solution were taken and increasing aliquots of combined working standard solution (0.4, 0.5, and 0.6 ml from 100 μg/ml of both) were added and diluted to 10 ml with methanol. These solutions were prepared in triplicate. Absorbance of solution was measured at selected wavelength for CPD and OFL.

The amount of CPD and OFL was calculated at each level by simultaneous equation method and % recoveries were computed.

Analysis of CPD and OFL in combined tablet: Twenty tablets were weighed and the average weight was calculated. The tablet powder equivalent to 10 mg of CPD and 10 mg of OFL were weighed and transferred to 100 ml volumetric flask. Methanol (50 ml) was added and sonicated for 20 min. The volume is adjusted up to the mark with methanol. The solution was then filtered through Whatman filter paper no. 41. The solution was suitably diluted with methanol to get a final concentration of 5 μg/ml of CPD and 5 μg/ml of OFL. The absorbances of the sample solution i.e. A1 and A2 were recorded at 236 nm (λ-max of CPD) and 299 nm (λ-max of OFL) respectively, Relative concentration of two drugs in the sample was calculated using above equation (1) and (2).

RESULT AND DISCUSSION: In simultaneous equation method, the primary requirement for developing a method for analysis is that the entire spectra should follow the Beer’s law at all the wavelength 16, which was fulfilled in case of both these drugs. The two wavelengths were used for the analysis of the drugs were 236 nm (λ-max of CPD) and 299 nm (λ-max of OFL) at which the calibration curves were prepared for both the drugs. The overlain UV absorption spectra of CPD (236 nm) and OFL (299 nm) in methanol is shown in Figure 3. The validation parameters were studied at all the wavelengths for the proposed method. Accuracy was determined by calculating the recovery and the mean was determined (Table 2). The method was successfully used to determine the amounts of CPD and OFL present in the tablet dosage forms. The results obtained were in good agreement with the corresponding labeled amount (Table 3). Precision was calculated as repeatability and intra and inter day variations (% RSD) for both the drugs.

CONCLUSION: The developed simultaneous equation method is found to be simple, sensitive, accurate and precise and can be used for routine analysis of CPD and OFL. The developed method was validated as par ICH guidelines. Statistical analysis proved that the method is repeatable and selective for the analysis of CPD and OFL in combination as a single drug in bulk as well as in pharmaceutical formulations.

TABLE 3: ANALYSIS OF CPD AND OFL BY PROPOSED METHOD. 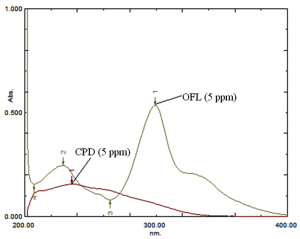