The method for the simultaneous estimation of Cinnarizine and Domperidone maleate from tablet dosage form has been developed, based on simultaneous equation method at two selected wavelength 254nm and 284nm respectively, and also absorbance ratio method at two selected wavelengths 274.0nm (Iso-absorptive point) and 254.0nm (λmax of cinnarizine). The linearity was obtained in the concentration range of 5-20μg/ml and 5-20μg/ml for cinnarizine  and Domperidone maleate respectively. These methods are simple, accurate and results of analysis have been validated statistically and by recovery studies.

INTRODUCTION: Domperidone maleate (DOM) is chemically 5-Chloro-1-[1-[3-(2-oxo-1, 3-dihydrobenz imidazol-1-yl)propyl]-4-piperidyl]-1, 3-dihydrobenz imidazol-2-one maleate. Its gastroprokinetic properties are related to its peripheral dopamine receptor blocking properties. It facilitates gastric emptying and decreases small bowel transit time. Antiemetic property is related to its dopamine receptor blocking activity at both the chemoreceptor trigger zone and at the gastric level. It is used for the symptomatic management of upper GI motility disorders associated with chronic and subacute gastritis and diabetic gastroparesis; prevention of GI symptoms associated with use of dopamine-agonist anti-Parkinson agents.

It is official in the Indian Pharmacopoeia. Literature survey reveals, HPLC and HPTLC methods have also been reported for estimation of DOM in Pharmaceutical dosage forms and also there are various methods such as UV spectrophotometry for DOM 9-11.

Extensive literature survey reveals, none of the method is available that is based on estimation of Cinnarizine and Domperidone maleate simultaneously by absorption ratio UV-spectrophotometric method.

Aim of the present work was to develop simple, precise, accurate and economical spectrophotometric methods for simultaneous determination of binary drug formulation.

The proposed method was optimized and validated in accordance with International Conference on Harmonization (ICH) guidelines 12. 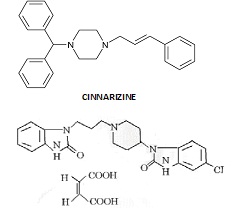 Solvent: Hydrochloric acid selected as solvent for developing spectral characteristics of the drug. The selection was made after assessing the solubility of both the drugs in different solvents.

Preparation of Standard Stock Solutions: Cinnarizine and Domperidone (10mg each) were accurately weighed and dissolved separately in100ml of methanol to give stock (100μg/ml) 2. From the standard stock solution, 1ml each of CIN and DOM was taken in 10ml volumetric flask. Volume was made up to mark with methanol. Aliquot portion was appropriately diluted with 0.1 N HCl to get final concentration of 5-20μg/ml (CIN) and 5-20 μg/ml (DOM) prepared respectively to give final concentrations and scanned between 200-400nm 3.

Application of the Proposed Method for the determination of CIN and DOM in Tablet Dosage Form:

1)      Simultaneous Equation Method: Twenty tablets were weighed and average weight was calculated3-6. The tablets were crushed into fine powder. Tablet powder equivalent to 10mg of CIN was transferred to 100ml volumetric flask and ultra sonicated for 10min .The volume was made upto the mark with HCl. The resulting solution was then filtered through a Whatmann filter paper (No. 41).

Aliquot portion was appropriately diluted with HCl to get final concentration of 20μg/ml. The concentration of both CIN and DOM were determined by measuring absorbance of sample at 254.0nm, 284.0nm in spectrum mode (fig. 1) and values were substituted in respective formulae to obtain the concentration. 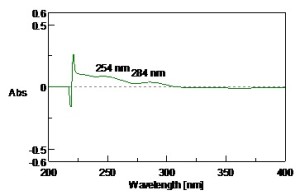 2)      Absorbance Ratio Method: In the absorbance ratio method, from the over lay spectra of drugs (fig. 2), wavelengths274.0nm (Iso-absorptive point) and 254.0nm (λmax of cinnarizine) were selected for analysis. The calibration curves for cinnarizine and domperidone were plotted in the concentration range of 5-20μg/ml and 5-20μg/ml at both the wavelengths respectively. The absorptivities values were determined for both the drugs at both the wavelengths (fig. 2). From the following set of equations the concentration of each component in sample was calculated,

ax₁= absorptivity of cinnarizine at 254.0nm,

ay₁=absorptivity of domperidone at 284.0nm, 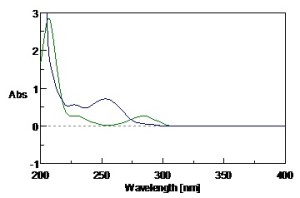 FIG. 2: OVERLAIN OR ABSORBANCE SPECTRA FOR CIN AND DOM IN THE RANGE 200-400nm

Linearity 7: The linearity was obtained in the concentration range of 5-20μg/ml and 5-20μg/ml for cinnarizine and domperidone respectively in both methods which obeys Beer-Lambert’s law. The results of the same are shown in fig. 3 and fig. 4. 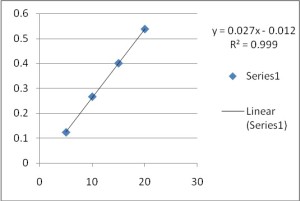 Accuracy 8: To ascertain the accuracy of the proposed methods, recovery studies were carried out by standard addition method at Table 1 and Table 2.

Limit of Detection (LOD) and Limit of Quantitation (LOQ): The LOD and LOQ by proposed methods were determined using calibration standards. LOD and LOQ were calculated as 3.3s/S and 10s/S, respectively, where S is the slope of the calibration curve and s is the standard deviation of response. The results of the same are shown in Table 1 and Table 2.

Results of Analysis of Tablet Formulation:

RESULTS AND DISCUSSION: From the proposed research, it was found that cinnarizine and Domperidone obeys linearity within the concentration range 5-20μg/ml and 5-20μg/ml respectively. Percentage label claim for CIN and DOM in tablet, by simultaneous equation and absorption ratio methods was found in the range of 97.5% to 99.4% and 97.33% to 99.33% respectively. For Coefficient of variation (CV) were calculated, which was found to be less than 2% indicating the both method has good reproducibility.

CONCLUSION: Based on the results obtained, it is found that the proposed methods are accurate, precise, reproducible and economical and can be employed for routine quality control of cinnarizine and domperidone maleate in combined dose tablet formulation.