A simple, sensitive and accurate spectrophotometric method has been developed for the deterrmination of  Risperidone in raw material and capsule. The λmax of Risperidone was found to be 202nm. Risperidone obeys linearity within the concentration range of 2.5 to 20µg/mL and coefficient correlation was found to be 0.9991.The regression of the curve was Y= 0.0508X+0.0112. The %RSD value is below 2.0 for intraday and interday precision indicated that the method is highly precised. The percentage recovery value was higher than 100%, indicating the accuracy of the method and absence of interference of the excipients  present in the formulation. The proposed method will be suitable for the analysis of   Risperidone in bulk and pharmaceutical formulations.

INTRODUCTION: Risperidone  is psychotropic agent used to treat schizophrenia, action of which is mediated through a combination of dopamine Type 2 (D 2 ) and serotonin Type 2 (5HT 2 ) receptor antagonism. It is a selective monoaminergic antagonist with high affinity for 5HT 2, D 2 and H1 histaminergic receptors 1. It belongs to chemical class of benzisoxazole derivatives and is 3-[2-[4-(6-fluoro-1, 2-benzisoxazol-3-yl)-1-piperidinyl] ethyl]-6, 7, 8, 9-tetrahydro-2-methyl-4H-pyrido- [1, 2-a]-pyrimidin-4-one (Fig. 1) with molecular formula of C 23 H 27 FN 4 O 2 and molecular weight of 410.49.

Literature survey revealed that various methods have been reported for estimation of Risperidone  in biological matrices such as plasma with help of LC 2, 3 , LC with diode array detection 4 , LC with tandem mass spectrometry 5, 6, 7 and LC with electrochemical detection 8. Few stability-indicating methods have been reported for determination of  Risperidone in bulk powder and tablets in presence of its degradation products 9, 10.

Selection of Wavelength: In order to  ascertain the wavelength of maximum absorption (λmax) of the drug, different solutions of the  drugs  (5μg/mL  and  10μg/mL)  in 0.1N HCl were scanned using spectrophotometer within the wavelength region of 200-380nm against methanol as blank. The resulting spectra showed characteristic absorption maxima at 202nm for Risperidone.

Preparation of Standard Solution for Calibration: 10 mg Standard Risperidone  was accurately weighed and transferred to 100 mL volumetric flask  and was dissolved properly and diluted up to the mark with 0.1N HCl. Then 5mL of this solution was diluted  to 100mL with 0.1N HCl  . Appropriate amounts of this stock solution were diluted with the same solvent, yields concentrations of 2.5mg/mL, 5mg/mL, 10mg/mL, 15mg/ml and 20mg/mL which were used for the construction of calibration curve.

The proposed method was validated according to ich guidelines for linearity, precision, accuracy, stability, lod, loq and stability 11 (Table 2).

Precision: The precision of the assay was determined by repeatability (intraday) and intermediate precision (inter-day) and reported as %RSD. For this, 5μg/mL concentration solution was measured three times in day and same was measured in next three days. Then the %RSD was calculated.

Accuracy (Recovery Studies): Recovery studies were performed to judge the accuracy of the method and were carried out by adding a known quantity of pure drug to the preanalyzed formulation and the proposed method was followed. From the amount of drug found, percentage recovery was calculated. Recovery study was carried out at three levels 80%, 100% and 120% for the formulation concentration of 5µg/mL (Table 3).

LOD & LOQ: LOD (k= 3.3) and LOQ (k= 10) of the method were established according to ICH definitions. LOD and LOQ of method are reported in Table 2. In this study, LOD and LOQ were based on the standard deviation of the response and the slope of the corresponding curve using the following equations;

Where S is the standard deviation of the absorbance of the sample and M is the slope of the calibrations curve.

Stability Study: In order to demonstrate the stability of both standard and sample solutions during analysis, both solutions were analyzed over a period of 24 h at room temperature and % RSD of absorbance for both solutions was calculated.

RESULTS & DISCUSSION: The λmax of Risperidone was found to be 202nm. From the optical characteristics (Table 2) of the proposed method, it was found that Risperidone obeys linearity within the concentration range of 2.5 to 20µg/mL and coefficient correlation was found to be 0.9991. The regression of the curve was Y =0.0508X+0.0112. The detection and quantization limits as LOD (k=3.3) and LOQ (k=10) were calculated and these were found to be 1.05µg/mL and 3.34µg/mL respectively.

The precision (measurements of intraday and interday) results showed (Table 2) good reproducibility with percent relative standard deviation (% RSD) is below 2.0. This indicated that method is highly precised. The percentage recovery value (table 3), which was higher than 100 %, indicating the accuracy of the method and absence of interference of the excipients present in the formulation.

The results of stability study showed that for both solutions, the absorbance remained almost similar (% R.S.D. less than 2.0) and no significant degradation within the indicated period, thus indicated that both solutions were stable for at least 24 h, which was sufficient to complete the whole analytical process. The proposed method was also applied for the assay of Risperidone in tablet formulation (in triplicate) and the results are presented in Table 4. The results obtained were good agreement with the label claims. 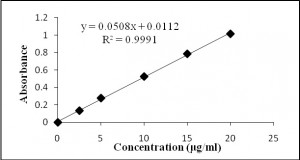 CONCLUSION: The proposed  method was simple, sensitive and reliable with good precision and accuracy. The proposed method is specific while estimating the commercial formulations without interference of excipients and other additives. Hence, this method can be used for the routine determination of Risperidone in pure samples and pharmaceutical formulations.

ACKNOWLEDGEMENTS: The authors are  thankful to Orion Laboratories Ltd for providing  necessary facilities for conducting this research work.