DEVELOPMENT AND VALIDATION OF SPECTROPHOTOMETRIC METHOD FOR THE ESTIMATION OF FLUCLOXACILLIN

DEVELOPMENT AND VALIDATION OF SPECTROPHOTOMETRIC METHOD FOR THE ESTIMATION OF FLUCLOXACILLIN

A new, simple, sensitive and reproducible spectrophotometric method has been developed for the estimation of Flucloxacillin in pure form. Method involves the determination of Flucloxacillin by dissolving in water and followed by measuring the absorbance at 273 nm. The linearity was obtained in the concentration range of 100-300 µg /ml. The suitability of method for quantitative analysis of Flucloxacillin was proved by validation. This method was extended to tablet formulation and there was no interference from excipients and diluents. This method has been statistically validated and is found to be precise and accurate.

Unlike other penicillins, Flucloxacillin has activity against beta-lactamase- producing organisms such as Staphylococcus aureus as it is beta-lactamase stable used in the treatment of dyslipedimia and the prevention of cardio vascular disease.

Literature reviews 2-8  revealed very few method of estimation for Flucloxacillin in bulk and formulation has been reported so far except HPLC 9-10   in biological fluids. 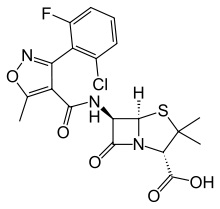 MATERIALS AND METHODS: All the measurements were made using Shimadzu UV-visible double beam spectrophotometer with 1mm matched quartz cells. All the solutions were freshly prepared using distilled water.

Preparation of Standard Stock Solution: It was prepared by dissolving 100mg of Flucloxacillin in water and diluted with distilled water in 100 ml volumetric flask to produce 1000 µg/ml.

Absorption Maximum: The stock solution was suitably diluted with water so as to contain 100 mcg/ml of Flucloxacillin. This solution was subjected to scanning in UV region of 200-400 nm and found that Flucloxacillin exhibited maximum absorbance at about 273 nm. The spectrum is recorded and shown in Figure 1.

Linearity (Calibration Curve): Aliquots of 1, 1.5, 2, 2.5 and 3 ml from standard stock solution were transferred to different volumetric flasks of 10 ml. The volume was adjusted to the mark with water gave a solution containing 100,150,200,250 and 300 mcg/ml of Flucloxacillin. The absorbances were measured at 273 nm using water as blank and the calibration curve was constructed by plotting absorbance vs. concentration. It was found that the above concentration range obey Beer’s law (Figure 2).

Precision: Repeatability, Intraday, Interday precision and optical characteristics of Flucloxacillin  were calculated and shown in table 1. 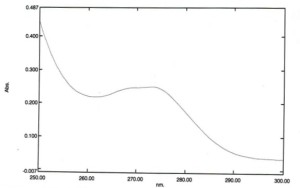 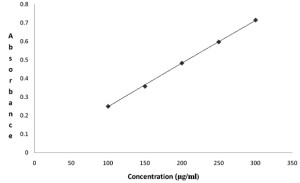 *Each average of 3 determinations

RESULT AND DISCUSSION: Estimation of Flucloxacillin by UV spectrophotometry is done using water as solvent. The wavelength 273 nm was fixed for the estimation of Flucloxacillin. Different concentrations of Flucloxacillin were prepared from the stock solution and their absorbances were measured at selected wavelength. To study the validity [11-16]   of the method, Linearity, Repeatability, Intra and Inter day precision were carried out using same optimum conditions. The calibration curve was obtained in the range of 100-300 µg /ml which obey Beer’s law. The correlation coefficient was found to be 0.9998. Precision studies were carried out as repeatability, Intraday and Interday assays. The Limit of detection (LOD) and Limit of quantification (LOQ) were found to be 20µg/ml and 100 µg/ml respectively.