ABSTRACT: A simple, precise, accurate and repeatable method for bulk and tablet dosage form of Ritonavir have been developed using spectrophotometric method. Differential spectrophotometric method was used. The developed method was validated according to ICH (Q2R1) guidelines and was found to be accurate, precise and specific. Amplitude difference was taken at absorbance maxima at 246 nm and absorbance minima at 266 nm. Linearity range was found to be within the concentration range of 10-30 μg/mL. Limit of detection and quantification was found to be 2.62 and 7.96 μg/mL respectively.  The proposed method was found accurate in the range of 95.5 to 105.5%. It can be successfully applied for the estimation of Ritonavir in bulk and pharmaceutical dosage forms. Results of the analysis were validated statistically and by recovery studies.

INTRODUCTION:Ritonavir, an anti-retro-viral agent (HIV protease inhibitor), chemically it is 1,3-thiazol-5-ylmethyl N-[(2S,3S,5S)-3-hydroxy-5-[(2S)-3-methyl-2-{[methyl({[2-(propan-2-yl)-1,3-thiazol-4-yl]methyl})carbamoyl]amino}butan amido]-1,6-diphenylhexan-2-yl]carbamate (figure 1), having molecular formula C37H48N6O5S2 and molecular weight 720.944. Ritonavir has been reported to be quantified individually or in combination by spectrophotographic method and HPLC 1, 2.

Literature survey revealed that few analytical methods are available for determination of Ritonavir from biological fluid with combination of other drugs by RP-HPLC 3, 4, 5.

Isosorbide mononitrate is a nitrate- class drug used for the prophylactic treatment of angina pectoris; that is, it is taken in order to prevent or at least reduce the occurrence of angina 3. 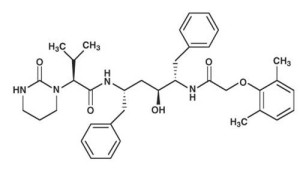 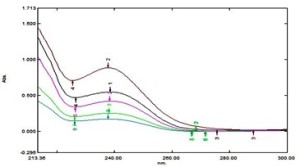 Selection of solvent for difference spectroscopic method condition: Differential Spectrophoto-metric method was selected for the further process. There were three solvents tried (NaOH, HCl, and Water) randomly by making set of two solvents. For the six possibilities e.g. one of the above solvent was taken as reference and other one was taken as sample or test and baseline was corrected. From them based on linearity NaOH as reference and Water as test possibility was selected. The calibration curve was as follow.

In this 5 volumetric flasks were taken. To each flask 0.5 ml, 0.75 ml, 1 ml, 1.25 ml, 1.50 ml stock solution (1000μg/ml) was added respectively. Then it was diluted with NaOH up to the mark. That gave solution having concentration 10, 15, 20, 25, 30 ppm. Similarly solutions having same concentrations were prepared in water. In UV spectrometer, cuvette having NaOH solution was kept in reference holder and cuvette having water solution was kept in test holder.

FIGURE 3: DIFFERENTIAL SPECTRUMS IN NaOH (AS REFERENCE) AND WATER (AS TEST) 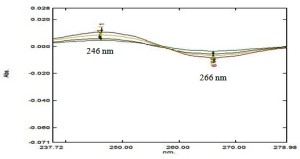 1st derivative absorbance difference for each calibration standard were measured at 246 nm and 266 nm. Amplitude difference was calculated between these two wavelengths and plotted against concentration (figure 5).

RESULT AND DISCUSSION: The method was validated according to ICH Q2R1 guidelines 10, 12 for validation of analytical procedures in order to determine the linearity, sensitivity, precision, Range, limit of detection (LOD), limit of quantification (LOQ) and accuracy for the analyte.

Analysis of Tablet Formulation: Marketed tablet formulation containing Ritonavir 100 mg was analyzed using this method. From the 20 tablets, an amount of tablet powder equivalent to 100 mg Ritonavir was weighed and transferred into 100 ml volumetric flask. Volume was made up to 100 ml with methanol (1000 µg/ml).

It was filtered for getting completely clear solution and removal of drug excipients. 1.25 ml and 1.5 ml of resulting solution was withdrawn in 50 ml volumetric flasks (2 sets, total 4 volumetric flasks) and volume was made up to 50 ml with NaOH and Water for preparing 25µg/ml and 30µg/ml respectively. Differential spectrums of resulting concentration were taken by putting NaOH solution in to reference holder and water solution in to test holder and scanning was done between 200-400 nm and spectra was obtained. 1st derivative spectra were calculated (Table 1).

Linearity: The linearity of this method was determined at five concentration levels ranging from 10µg/ml to30 µg/ml. The plot of amplitude difference Vs concentration (Fig. 5) of Ritonavir was found to be linear in the range of 10µg/ml- 30 µg/ml. Beer’s law was obeyed over this concentration range (Table 3).

TABLE 3: DATA FOR THE STANDARD CURVE OF RITONAVIR

LOD & LOQ: The linearity study was carried out for six times. LOD (k = 3.3) and LOQ (k = 10) of the method were established according to ICH definitions. LOD and LOQ of method are reported in Table 8. In this study, LOD and LOQ were based on the standard deviation of the response and the slope of the corresponding curve using the following equations

Where σ is the standard deviation of the absorbance of the sample and s is the slope of calibration curve.

Repeatability: The repeatability of the method was confirmed by repeating all calibration standards 5 times at 95 % confidence level (Table 4).

Intermediate precision: The intermediate precision of the method was confirmed by intraday and inter day analysis i.e. the analysis of formulation was repeated three times in the same day and on three successive days. For this, 10μg/ml, 15 μg/ml, 20 μg/ml concentration solution was analyzed three times in day and same was measured in next three days and CV also calculated. CV was found to be less than 2% (Table 5 and 6).

CONCLUSION: From the validation study of the developed method for Ritonavir was found to be simple accurate, precise, and repeatable. Hence it can be applied for routine analysis of Ritonavir in its tablet dosage form for quality control.

ACKNOWLEDGEMENT: My heartily thank to Faculty of Pharmacy, Dharamsinh Desai University, for permitting to conduct this work. My special thanks to my guide Mr. Rajanikant Mardia for guiding me and supporting me at every level of this work.

At last I am thankful to almighty and of course my parents and all dear friends for their indirect support and blessings.