ABSTRACT: A simple sensitive, accurate, precise and stability indicating high performance thin layer chromatographic method has been developed and validated for the estimation of troxipide in bulk drug and formulation. The method was developed using silica Gel 60 F254TLC plates, with hexane: ethyl acetate: methanol: water: ammonia 1: 5: 5: 1.5:0.2 (v/v) as mobile phase. The densitometric scanning was performed at λ = 263 nm. The method was validated for linearity, accuracy, precision, specificity and robustness according to ICH guidelines. The calibration plots were linear in the range 200-700 ng/band with r2= 0.998. The LOD and LOQ were found to be 20.39 and 61.81 ng/spot, respectively. Troxipide was subjected to acidic, alkaline hydrolysis, oxidation, photo degradation and thermal degradation. The drug undergoes degradation in acidic as well as alkaline hydrolysis and thermal degradation; however it was found to be relatively stable for photolytic and oxidative degradation conditions. As the drug peak and the degradation product peaks were well separated from each other; this method can be employed as stability indicating method for the determination of troxipide and its degradation products from API and formulation

INTRODUCTION: Troxipide [3, 4, 5-trimethoxy-N-3-piperidylbenzamide] (Fig. 1), is a gastroprotective agent with a molecular formula of C15H22N2O4 and molecular weight of 294.4. Troxipide is known to treat gastritis and gastric ulcer, through a multimodal action. Troxipide protects against mucosal fragility and disruption of gastric mucosal barrier by increasing the gastric mucosal content of glucosamine and mucopolysaccharides, stimulating the synthesis of cytoprotective prostaglandins and by stimulating the regeneration of collagen fibers 1, 2. 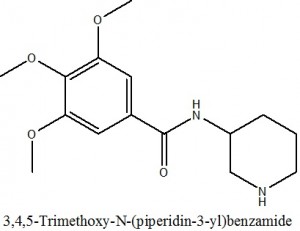 Literature survey revealed that different analytical methods for the determination of troxipide have been reported, which include, spectrophotometric and high performance liquid chromatography (HPLC) method 3 and a stability indicating LC method 4, 5. However no HPTLC method has been reported for determination of troxipide and its degradation products. As compared to the other analytical techniques, HPTLC is the most simple and less time consuming technique. This technique has an advantage that many parameters can be performed at one time, which is not possible with other analytical techniques. Hence this article describes a simple, precise, accurate validated HPTLC method for quantitative estimation of TRP and its degradation products.

Standard Solution: Standard stock solution containing 1000 µg/ml of Troxipide was prepared in methanol by weighing 10 mg of TRP dissolving it in sufficient quantity of methanol and finally volume was made up to 10 ml with methanol. Further it is diluted to get the concentration of 100 µg /ml.

Twenty TRP tablets were weighed and powdered and quantity of powder equivalent to 10 mg was weighed and transferred to 100 ml volumetric flask. The powder was dissolved in methanol by sonication for 5 min, the solution was filtered through a whatmann filter paper no. 41 and finally volume was made with the methanol. Further it is diluted to get the concentration of 100 µg /ml.

Chromatography: Chromatography was performed on 20 x10 cm aluminium backed silica gel 60 F254TLC plates (Merck, Darmstadt, Germany). Before use, the plates were washed with methanol and activated at 110 0C for 5 min. hexane: ethyl acetate: methanol: water: Ammonia 1: 5: 5:1.5:0.2 (v/v) were used as the mobile phase. Samples (5 µl) were applied to the plates as 6 mm bands, keeping 17.7 mm distance between bands and 8 mm distance from plate side edge and 8 mm distance from bottom of plate.  CAMAG (Muttenz Switzerland) Linomat V was used as sample applicator equipped with 100 µl syringe (Hamilton, Reno, Nevada, USA) with the spraying rate as150 nL/sec. The plates were developed in CAMAG 20 x 10 cm twin trough chamber lined with filter paper and saturated with mobile phase vapors for 10 min at room temperature. The solvent front position was set as 80 mm. After development of the plate in the mobile phase, it was dried in hot air oven at 500 C for 5 min.

The method was validated according to ICH guidelines for the parameters including accuracy, precision, linearity, specificity and robustness in analytical solution 6.

The equivalent volume of standard stalk solution (2.0-7.0 μl) was spotted on plate to cover the range of and 200-700 ng per band. Chromatographic plates were developed using optimized procedure and scanned as described above. The peak areas were recorded for troxipide. As the calibration can be accepted as linear, only if it is proven statistically, hence to prove the linearity of the data; non numerical test method (testing the residuals) was performed 7, 8, 9.

The specificity of the method was determined by analyzing standard drug, test sample and its three impurities.  The spot for standard and sample drug was confirmed by comparing the Rf and spectrum of the spot to that of a standard. The peak purity was determined by comparing r value of the spectrum at different regions of the spot, i.e, peak start (S) to peak apex (M) and peak apex (M) to peak end (E).

Acidic Hydrolysis: To the 10 ml of standard stalk solution of TRP standard (1000 µg/ml), 10 ml of 0.5 M HCl was added. The above mixture was refluxed for 4 hrs at 600C. After refluxing the solution was allowed to cool at room temperature and it was neutralized with 0.5 M NaOH and finally volume was made up to 50 ml with methanol.

Alkaline Hydrolysis: To the 10 ml of standard stalk solution of TRP standard, 10 ml of 0.5 M NaOH was added. The above mixture was refluxed for 4 hrs at 600C. After refluxing the solution was allowed to cool at room temperature and it was neutralized with 0.5 M HCl and finally volume was made up to 50 ml with methanol.

Oxidative degradation: To the 10 ml of standard stalk solution of TRP standard, 10 ml of 3 % H2O2 was added. The above mixture was refluxed for 4 hrs at 600C. After refluxing the solution was allowed to cool at room temperature and finally volume was made up to 50 ml with methanol.

Photolytic degradation: 10 ml standard stalk solution was exposed to sunlight for 24 hrs and volume was made up to 50 ml with methanol.

Thermal degradation: 10 ml of standard stalk solution was refluxed at 400C for 4 hrs. After refluxing the solution was allowed to cool at room temperature and finally volume was made up to 50 ml with methanol.

From all the above stress degradation sample solutions each of 10 µl solution was applied on the plate. Plate was developed in the optimized chromatographic conditions and scanned as explained in previous section.

Linearity: A good linear relationship between response (peak area) and concentration was obtained (Fig. 2). Form the calibration curve of troxipide, linear regression equation was computed and a correlation coefficient was obtained (Table 1). The correlation coefficient was found to be 0.998, which shows excellent linearity between the concentration and response. From non numerical test; the plot of residuals was obtained which doesn’t show any trend in it that implies results are satisfactory. This proves the linearity of calibration. 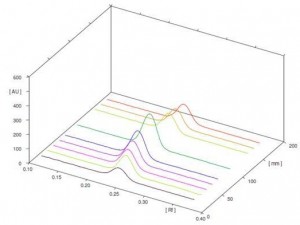 To check the repeatability, the response of sample solution was recorded six times. The intraday and inter day precision was performed as per the procedure given in previous section. For both repeatability and intermediate precision, the %RSD value was found to be always less than 2; which reveal that the method is precise (Table 2).

By deliberately changing some of the parameter, robustness of the method was evaluated. The results after Statistical analysis show that the % RSD value was found to be always less than 2. Thus method was found to be robust (Table 3). 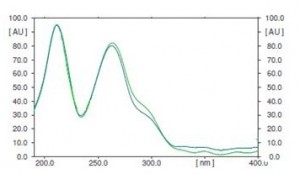 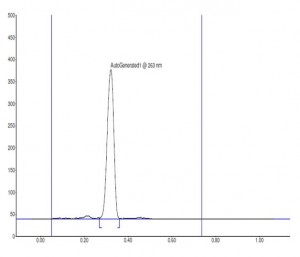 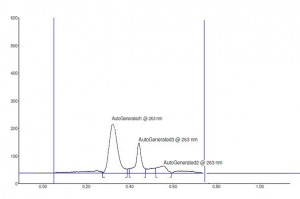 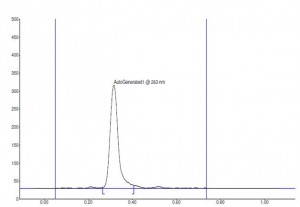 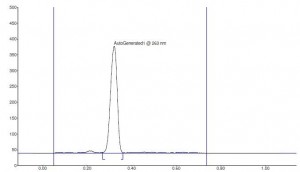 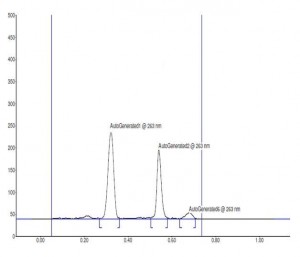 CONCLUSION: Proposed method describes stability indicating HPTLC method for the estimation of TRP from API as well as its formulation. The method was validated and found to be simple, sensitive, accurate, precise and robust. Also the results of stress degradation study indicate the suitability of the method for acid, base, oxidative, photo and thermal degradation study. As the method separates the drug from its degradation products, it can be used for analysis of stability samples.

ACKNOWLEDGEMENT: Authors are grateful to the Anchrom Labs Ltd., Mulud, Mumbai, for providing instrumentation and necessary facilities to carry out the research work.