ABSTRACT: A simple, accurate, precise, and rapid high-performance thin-layer chromatographic (HPTLC) method for determination of Apixaban (API) in bulk drug and the pharmaceutical formulation was developed and validated. The separation was performed on aluminum plates, pre-coated with silica gel 60F254 as the stationary phase using toluene: methanol (7:3 v/v), as mobile phase. Densitometric measurement of the API was carried out at 290 nm. The retention factor (Rf) was found to be 0.62 ± 0.04. The method was successfully validated as per International Conference on Harmonization (ICH) guidelines Q2 (R1). The calibration curve was linear in range 50-300 ng/band. The limits of detection and quantitation were 0.272 and 0.824 ng/band, respectively. Accuracy and precision of the proposed method were evaluated by recovery studies and intra-day and inter-day precision studies, respectively (standard deviation for precision studies was found to be less than 2). The developed method was used to analyze marketed formulation samples (tablet) of the API. The API was subjected to various stress conditions as per ICH Q1A (R2) guidelines. In stress studies, the drug showed significant degradation during acid, alkaline hydrolytic, and oxi-dative conditions. As the method could effectively separate the drug from their degradation products, it can be used as a stability indicating method. 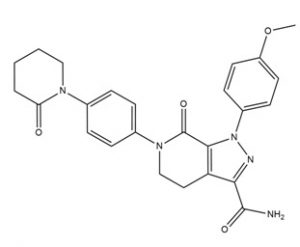 Apixaban is to reduce the risk of stroke and systemic embolism in patients with nonvalvular atrial fibrillation. It has also been used to lower the risk of developing venous thrombosis post-orthopedic surgical procedures 5.

LC-MS/MS methods were developed to determine apixaban alone in plasma or in the presence of its major metabolites 6, 7 and UHPLC-MS/MS 8 to support clinical uses. Assay in tablets 9, 10, and stability-indicating assay using UV 11 and HPLC was also described 12, 13. Characterization of degradation products using multistage mass spectrometry was also reported 14. Most of the reported methods are based on hyphenated techniques, and overall cost of the analysis using these techniques is more as compared to high-performance thin layer chromatography 15. In this work, a simple, sensitive, accurate, precise and economic stability-indicating high-performance thin layer chromatographic procedure was developed. The proposed method was optimized and validated as per ICH guidelines.

Preparation of Standard Solution: Standard stock solution of API (500 μg/ml) was prepared by dissolving accurately weighed quantity (5 mg) of the drug in 10 ml of methanol.

Selection of Mobile Phase: From the standard stock solution, 0.5 µl of the API was applied to chromatography plates in band form, and these plates were put for a run under different solvent systems. The attempts were made to achieve the preferred Rf value range 0.1-0.8. Different solvent systems were tried to determine the suitable conditions for efficient separation. From the different mobile phase combinations tested, toluene: methanol (7:3 v/v) yields a compact band which showed a symmetrical peak on chromatogram and expected Rf value of 0.62 ± 0.04 for the API.

Selection of Analytical Wavelength for Densitometry Evaluation: After chromatographic development, the TLC plate was scanned over the wavelength range of 200-700 nm. From the spectra Fig. 2, it was observed that Apixaban exhibited strong absorbance at about 290 nm, which was selected as the analytical wavelength for further analysis. 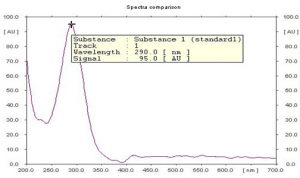 Instrumentation and Optimized Chromato-graphic Conditions: The samples were spotted in the form of bands of width 8 mm with Camag microlitre syringe on pre-coated silica gel aluminum plate 60F254 (10 cm × 10 cm, 0.2 mm, E. Merck, Germany) using Linomat 5 (Camag, Muttenz, Switzerland) semi-automatic sample applicator. Before chromatography, the plates were pre-washed by development with methanol and activated at 60 °C for 15 min. A constant application rate of 150 nl/Sec was employed, and space between the two bands was 11.3 mm.

Linear ascending development was performed in twin trough glass chamber previously saturated with the mobile phase for 10 min. The development distance was 80 mm. After the development; TLC plates were dried in a current of air with the help of an air dryer. Densitometric scanning was performed using Camag TLC scanner 3 in the absorbance mode at 290 nm. The slit dimensions were 6 mm × 0.33 mm. The source of radiation utilized was a deuterium lamp emitting a continuous UV spectrum in the range of 200 - 400 nm.

Preparation of Sample Solution: Twenty tablets of Eliquis (manufactured by Bristol-Mayers Squibb, Frosinone, Italy) was weighed and powdered.  Powder equivalent to 5 mg of apixaban was transferred to 10 ml calibrated volumetric flask; 5 ml of methanol was added and ultrasonicated for 20 min, volume was made up to the mark with methanol and then filtered using Whatman filter paper no. 42. The resulting solution was used as a sample solution. On the TLC plate two bands of the standard stock solution and four bands of the sample solution, 0.5 µl of each, were applied, developed and scanned under optimized chromatographic conditions. Amount of drug in the sample was calculated by comparing the mean area of sample band with that of the standard band.

Forced Degradation Studies: To determine the stability-indicating ability of developed HPTLC method, the active pharmaceutical ingredient powder was stressed under various conditions as per ICH guidelines. In all cases, API (5 mg) was accurately weighed, then subjected to forced degradation conditions such as acid (0.1 N HCl at 80 ºC), base (0.1 N NaOH at 80 ºC), neutral hydrolysis (water at 80 ºC), oxidation (3% H2O2 at 80 ºC), heat (60 ºC), and UV light (254 nm). All stressed solutions of API were removed after stipulating time interval during the stress study and subjected to chromatography analysis after suitable dilution of stress samples 16.

Method Validation: As per the ICH guidelines, the method was validated, and included various parameters such as linearity, the limit of detection, the limit of quantitation, accuracy, precision, and robustness 17.

Accuracy: The accuracy was determined by the percent recovery method. Recovery studies were carried out by spiking three different known amounts of pure drug at 80%, 100% and 120% of label claim to the pre-analyzed tablet powder. An accurately weighed quantity of tablet powder equivalent to 5 mg API was transferred individually to nine different 10 ml volumetric flasks, to each of the flasks, add 4, 5 and 6 mg of the API in a manner like three replicates of each concentration level were analyzed. Accuracy was expressed as % recovery.

Precision: The system precision was evaluated by six replicate analysis of the standard solution. The method precision was studied by analyzing six different sample solutions of the same concentration. The results for method system precision were expressed in terms of percent relative standard deviation. For evaluating intra-day and inter-day precision, variances were determined over 1 day and 3 days, respectively.

Robustness: The effect of slight deliberate variation in the method parameters such as the composition of the mobile phase, chamber saturation time, and volume of mobile phase on Rf values and peak area, was observed one by one. The composition of the mobile phase and chamber saturation time were varied in the range of ± 0.1 ml and ± 5 min, respectively, of the used optimized conditions. The volume of mobile phase was varied by ± 1 ml. The effect of these variations on both the Rf values and peak area of the API was studied by calculating the relative standard deviation for each parameter.

Method Optimization for the Densitometric Measurements: The working standard of the drug was spotted on the TLC plates and developed in different solvent systems. Different solvents in varying proportions were tried. The optimum results were obtained with a mobile phase consisting of toluene: methanol (7:3 v/v). The chamber was saturated with the mobile phase at room temperature. The bands developed were dense and compact with the acceptable Rf value of 0.62 ± 0.04. The representative densitogram is given in Fig. 3.

Analysis of Marketed Formulation: The commercial tablet, Eliquis (2.5 mg) was quantitatively determined using the developed HPTLC method. The analysis of tablet formulation was based on comparing the mean peak area of the standard band with that of the sample peak area. The results obtained after tablet analysis was in good agreement with those of label claim, and the result is summarized in Table 1. 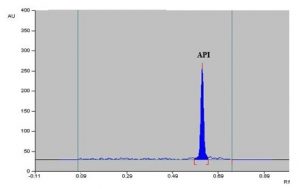 Linearity: A linear relationship established between peak area and concentration was found to be in the range of 50-300 ng/band Fig. 4. The correlation coefficient of the calibration curve was found to be 0.9982. 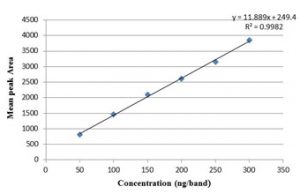 Robustness: Robustness of the proposed method were studied to measure the reliability of developed HPTLC method by deliberate variations in the optimized method parameters such as the composition of the mobile phase (± 0.1 ml), chamber saturation time (± 5 min) and volume of mobile phase (± 1 ml). The effect of such deliberate variations was studied on Rf values and peak area of drug which are indicated in Table 4. Each sample was studied in triplicate (n=3) and the obtained peak areas were utilized to calculate % RSD, which was found to be less than 2. Hence, the method was found robust for the determination of API in tablets.

TABLE 4: RESULT OF ROBUSTNESS STUDIES AND ITS STATISTICAL VALIDATION 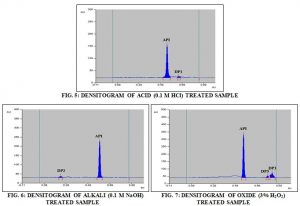 CONCLUSION: The developed method describes simple, sensitive, and selective stability indicating HPTLC method for estimation of Apixaban in pharmaceutical tablet dosage form. Method development and validation were performed as per ICH guidelines. The suggested method was found to be less time consuming and cost effective and may be more advantageous for routine analysis of drug in marketed formulation. Moreover, the method was validated as stability indicating assay for estimation of Apixaban in the presence of its degradation products. Therefore, the method can be employed as a stability-indicating one. The abovementioned study was able to explore the useful information which has not yet been reported in the literature of the API.

ACKNOWLEDGEMENT: The authors are thankful Taj Mahal labs limited, Mumbai, India for supplying a working standard of Apixaban as a gift sample. Authors are also thankful to the Principal, Dr. D. Y. Patil Institute of Pharmaceutical Sciences and Research, Pune for providing instrumental and infrastructure facility to carry out the research work.

CONFLICT OF INTEREST: The authors declared that there is no conflict of interest.