ABSTRACT: The present study aimed to develop and validate stability indicating method for the simultaneous determination of Elbasvir and Grazoprevir in its pharmaceutical dosage form using RP-HPLC. Chromatographic separation was done with Discovery C18 (250 mm × 4.6 mm, 5 µ) column using 0.1% ortho-phosphoric acid (OPA) and acetonitrile in the ratio 50:50% v/v as mobile phase on isocratic mode. The column oven temperature was maintained at 30 ºC with a flow rate 1.0 ml/min and components were detected at a wavelength of 315 nm. The retention times for Elbasvir and Grazoprevir was found to be 2.24 min and 3.21 min respectively. The developed method was validated according to ICH guidelines. A good linearity response was observed in the concentration range of 12.5 µg/ml - 75 µg/ml for Elbasvir and 25 µg/ml - 150 µg/ml for Grazoprevir with correlation coefficient of 0.999 for both the drugs. The method was found to be accurate, precise, specific, rugged and robust. The drugs were subjected to stress conditions for testing their stability and found to be stable, with net degradation was within the limits.

INTRODUCTION: Elbasvir Fig. 1A, chemically designated as Dimethyl N,N’-([(6S)-6H-indolo[1,2-c][1,3]benzoxazine-3, 10-diyl] bis{1H- imidazole-5,2-diyl-(2S)-pyrrolidine-2, 1-diyl[(2S)- 1- oxo- 3-methylbutane-1,2-diyl]})biscarbamate, is a white to off-white crystalline solid belonging to antiviral category. It is practically insoluble in water and very slightly soluble in ethanol, but is very soluble in ethyl acetate and acetone and has pKa values of 5.39 and 12.42.

The present study aimed to develop and validate a stability indicating RP-HPLC method for the simultaneous determination of Elbasvir and Grazoprevir in their tablet dosage form. 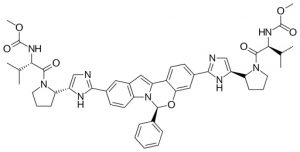 FIG. 1A: CHEMICAL STRUCTURE OF ELBASVIR 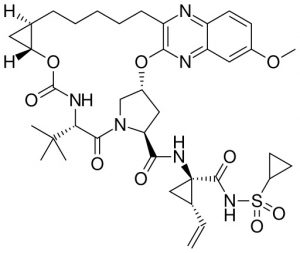 FIG. 1B: CHEMICAL STRUCTURE OF GRAZOPREVIR

Preparation of Mobile Phase: 0.1% OPA buffer was prepared by diluting 1 ml of OPA in 1000 ml of distilled water. Mixture of buffer and acetonitrile in the ratio 50:50% v/v respectively makes mobile phase.

Preparation of Diluent: For the preparation of diluent, water and acetonitrile in the ratio 50:50% v/v were mixed respectively.

Accurately weigh an amount equivalent to 5 mg of Elbasvir from the powdered tablet dosage form (Zepatier) and dissolve in 10 ml of diluent. Filter the above solution and pipette out 1 ml and make up the volume to 10 ml with diluent.

RESULTS AND DISCUSSION: For the development of the method, initially many mobile phase ratios at different flow rates were tried to elute the drugs. Mixture of 0.1% OPA and Acetonitrile in the ratio 50:50% v/v at 1.0 ml/min in isocratic mode was selected as mobile phase based on peak parameters. Discovery C18 (250 mm × 4.6 mm, 5 µ) column was used for separating the drugs. The column oven temperature was maintained at 30 ºC. From the Overlay, suitable wavelength considered for monitoring the drugs was 315 nm as shown in the Fig. 2.

The prepared standard and sample solutions were injected in the chromatographic system and system suitability and % assay were calculated. The standard, sample and blank chromatograms were shown in Fig. 3, 4 and 5 respectively. 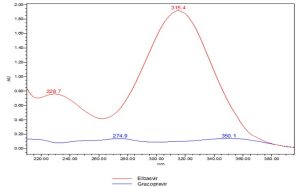 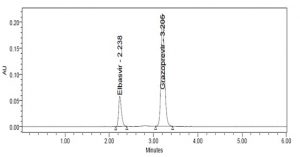 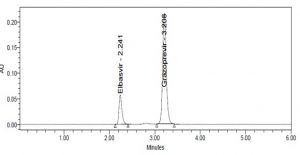 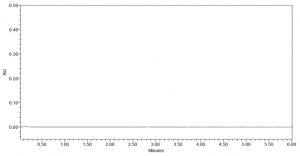 The developed method was validated with the validation parameters. Linearity of the method was determined by preparing the serial dilutions of the standard solution in the concentration range of 12.5 µg/ml - 75 µg/ml and 25 µg/ml - 150 µg/ml for Elbasvir and Grazoprevir respectively.

A graph was plotted between peak areas and concentration for both the drugs, where correlation coefficient was found to be 0.9998 for Elbasvir and 0.9997 for Grazoprevir, indicating that the method obeys Beer’s law. The linearity plots were shown in the Fig. 6A and 6B. 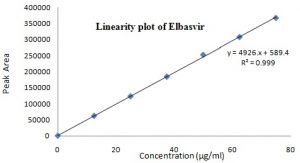 FIG. 6A: LINEARITY PLOT OF ELBASVIR 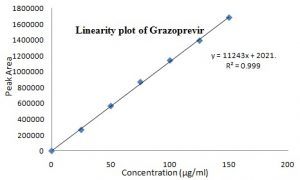 FIG. 6B: LINEARITY PLOT OF GRAZOPREVIR 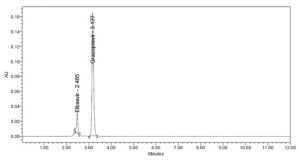 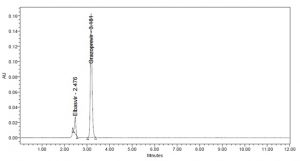 FIG. 8B: BASE DEGRADATION CHROMATOGRAM 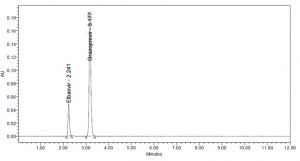 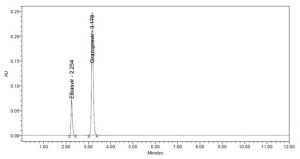 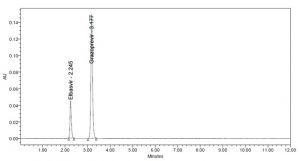 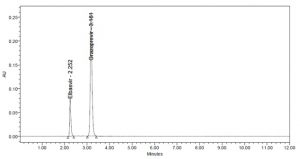