ABSTRACT:A new, simple, precise, rapid, accurate and stability-indicating RP-HPLC method has been developed for the determination of Entacapone in presence of its degradation products or other pharmaceutical excipients. Stress studies were performed on Entacapone tablets and it was found that it degrades sufficiently in acidic, alkaline and oxidation conditions, while negligible degradation was observed in thermal, photolytic and humidity conditions. The peaks of the degradation products were not observed in the chromatogram due to the nonchromophoric nature of the degradation moiety formed. The separations were carried out on a Hypersil BDS C8, 150 mm x 4.6 mm 5µm particle size column with a mobile phase consisting of Acetonitrile: 0.01% Orthophosphoric acid pH 2.5 at a flow rate of 1.0 ml/min. Detection wavelength was 210nm. The retention time of Entacapone was 7.0minutes. The developed method was validated in terms of specificity, forced degradation, linearity, precision, intermediate precision (ruggedness), accuracy, range and robustness. The calibration curve for Entacapone was linear (correlation coefficient 0.99995) from range of 50µg/ml to 150µg/ml. Relative standard deviation values for all the key parameters was less than 2.0%. The recovery of the Entacapone was found to be 100.3%. Thus, the developed RP-HPLC method was found to be suitable for the determination of Entacapone in bulk as well as stability samples of the pharmaceutical dosage forms containing various excipients.

INTRODUCTION: Entacapone is a selective, reversible catechol-O-methyl transferase (COMT) inhibitor for the treatment of Parkinson’s disease. It is a member of the class of nitrocatechols. When administered concomitantly with levodopa and a decarboxylase inhibitor (e.g., carbidopa), increased and more sustained plasma levodopa concentrations are reached as compared to the administration of levodopa and a decarboxylase inhibitor 1, 2, 3.

Stability screening of drug candidates constitutes an inevitable part of drug discovery. The need for the stability studies on a drug candidate arises from the fact that the chemical integrity of the drug substance should be maintained until the compound is delivered to the intended site of action.

A stability-indicating assay method helps in establishing the inherent stability of the drug which in turn provides assurance on detection changes in identity, purity and potency of the product on exposure to various conditions. In this study, the drug candidate is exposed to a variety of stress conditions like acidic, alkaline, oxidative, thermal, photolytic and humidity stress. As per the ICH guidelines, stress testing of the drug substance aids in identifying the likely degradation products, which in turn can help in establishing the degradation pathways and the intrinsic stability of the molecule and validate the stability indicating power of the analytical procedures used 7.

Several analytical techniques are available for estimation of Entacapone in bulk dosage form by HPTLC, HPLC and UV spectrophotometeric method 8, 9, 10, 11. Keeping this objective in mind an attempt has been made to develop and validate the HPLC method for the analysis of Entacapone which would be highly sensitive, good resolution and reproducible. Various validation parameters of the analysis, specificity, precision, linearity and accuracy have been measured as per ICH guidelines 12, 13, 14.

All other chemicals and reagents used were analytical grade and HPLC grade and purchased from Merck Chemicals, India. Tablets were procured from local market.

Degradation under Oxidation condition: Sample treated with 5ml of 30% w/v solution of hydrogen peroxide and kept for about 45 minutes at room temperature. Treated sample solution was prepared and injected.

Degradation under Dry heat: Sample was exposed to heat at 70°C for about 24 hours. Treated sample solution was prepared and injected.

Photo-Degradation condition: Sample was exposed to UV light up to 200watt hour/square meter and subsequently to cool fluorescent light to achieve an illumination of 1.2 million lux hours. Treated sample solution was prepared and injected.

Humidity Degradation condition: Sample was exposed to humidity at 40°C/75%RH for about 96hours. Treated sample solutions was prepared and injected.

Development and optimization of Chromatographic conditions: HPLC separation studies were carried out on the working standard solution of Entacapone (100 μg/ml). Several mobile phases were prepared using Acetonitrile and water by adjusting various pH. After several trials, Acetonitrile: 0.01% Orthophosphoric acid pH 2.5 (70:30 % v/v) was chosen as the mobile phase and column temperature was maintained at 50°C. This resulted in good resolution and acceptable peak parameters. RT was found as 7.0 minutes [Fig. 1]. 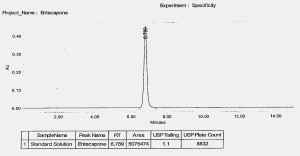 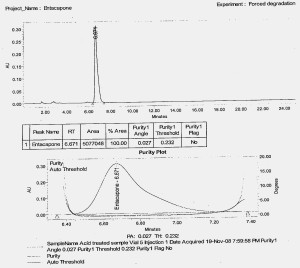 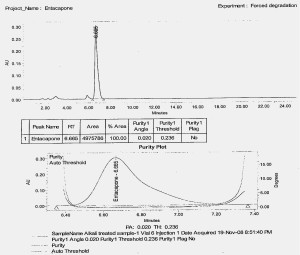 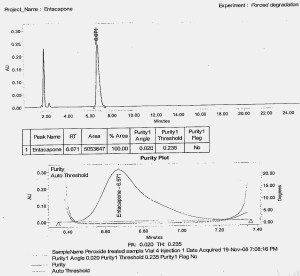 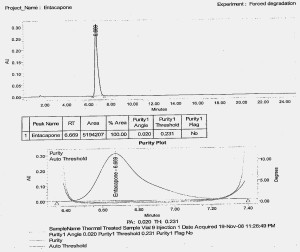 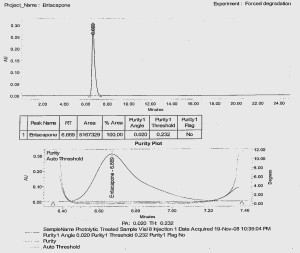 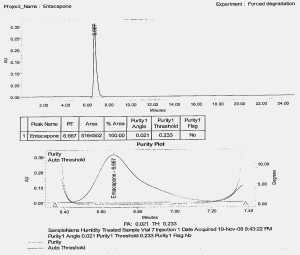 Specificity [Fig. 8]: The Specificity of the method was determined by %assay difference between mean of spiked sample result and mean of method precision results. No interfering peak was eluted at the retention time of Entacapone peak from blank and placebo. 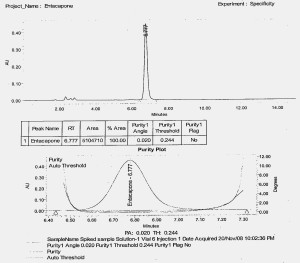 For the Peak purity, purity angle of Entacapone was checked which was 0.020 which was less than peak threshold 0.244 and in purity flag there was no tick mark.

Linearity: The data obtained in the linearity experiment was subjected to linear-regression analysis. A linear relationship between peak response and concentrations was obtained in the range of 50µg/ml to 150μg/ml of Entacapone with correlation coefficient (r) 0.99995.

Precision: The developed method was found precise as the overall %RSD for % assay of Entacapone in both method precision and intermediate precision were less than 2.0.

Accuracy: Excellent recoveries were obtained at each level of spiked concentration. The result obtained (n = 3 for each level) indicated the mean recovery between 98% to 102% for Entacapone.

Robustness [Table 3]: The overall % RSD for % assay of method precision and Robustness variations for change in flow rate, change in wavelength, change in column oven temperature, change in pH of buffer and change in organic content in mobile phase was found to be less than 2.0.

DISCUSSION: The degradation conditions mentioned above were arrived after number of initial trials for optimization of extent of degradation.

CONCLUSION: This study indicates a simple, rapid and validated stability-indicating HPLC method for determination of Entacapone in the presence of degradation products. All the degradation products formed during forced degradation studies were well separated from the analyte demonstrating that the developed method was specific and stability indicating.

The developed and validated method was Specific and stability indicating, Linear, Precise, Accurate, Rugged and Robust for the determination of Entacapone in Entacapone tablets. The method can also be applied for marketed products of Entacapone.