ABSTRACT: Tenofovirdisoproxilfumarate (TDF) is an essential component of highly active antiretroviral therapy (HAART) for HIV infection used in the treatment of human immunodeficiency virus (HIV) Type-1 patients. A stability-indicating HPLC method for the determination of TDF in solid-lipid nanoparticles was developed and validated. Chromatographic analysis was performed in a Agilent 1260 Infinity series, equipped with Waters Reliant™ C18 column, (USA) (250mm long, 4.6mm internal diameter, particle size 5µm), using a mobile phase composed of an aqueous phase (20mM KH2PO4) pH 2.4 and acetonitrile in the (50:50) ratio, at 1.0ml/min flow rate and injection volume of 20μl. Under the conditions established, the method demonstrated to be specific, without interference from formulation excipients, stability- indicating, linear (r2 = 0.9977) in the concentration range of 10.0 to 60.0μg/ml, precise (RSD=0.462), accurate (99.12%-100.76% of mean recovery) and robust. The TDF sample showed degradation under acid, base, oxidative, photolytic and dry heat stress conditions. The drug content of the solid lipid nanoparticle formulation when analyzed by the proposed method was found to be 98.92%.

INTRODUCTION: Tenofovirdisoproxilfumarate (TDF), is a bis-ester prodrug of the acyclic nucleoside phosphonate tenofovir (TFV). TDF is an essential component of highly active antiretroviral therapy (HAART) for HIV infection. 1 TDF is first hydrolyzed by carboxylesterase in the intestinal walls and subsequently hydrolyzed by phosphodiesterase during its first passage through the liver to diphosphate. 2

This diphosphate inhibits the DNA synthesis of HIV through competitive inhibition of reverse transcriptase and incorporation into viral DNA. TDF structure is shown in Fig. 1.

Literature review reveals that several methods have been reported for the estimation of TDF in tablets, using HPLC methods, 3-15 spectroscopic methods, 16 LC-MS. 17 HPLC is a preferred versatile technique because of its wide suitability and availability. So far, to our present knowledge, no method is reported for TDF determination in nanoparticulate systems like solid- lipid nanoparticles.

Preparation of standard solutions: Amount equivalent to 10mg of TDF was accurately weighed and dissolved in 5ml of (70:30) methanol: water mixture in 10ml volumetric flask (1mg/ml) with sonication for 10min. It was diluted to 10 ml with methanol: water mixture. Subsequent dilutions were done by using mobile phase as diluent to obtain concentrations of 10mg/ml, 20mg/ml, 30mg/ml, 40mg/ml, 50mg/ml and 60mg/ml. Mobile phase was used as blank solution.

Neutral degradation: To study the degradation behaviour of drug in neutral conditions, accurately weighed 10mg of TDF sample was mixed with 10ml of distilled water in a 100ml round bottom flask and refluxed for 24 h. Then this solution was quantitatively transferred to 50ml volumetric flask and diluted with methanol. From this solution 0.5ml was pipetted and transferred to 10ml volumetric flask and diluted to 10ml with mobile phase.

Specificity: Mobile phase along with placebo (excipients present in nanoparticle formulation other than the drug) were injected to check the interference at the retention time of TDF in the above mentioned chromatographic condition.

System suitability: System-suitability tests are an integral part of method development and are used to ensure adequate performance of the chromatographic system. Retention time (RT), number of theoretical plates (N), tailing factor (T) were evaluated for six replicate injections of the drug at a concentration of 30μg/ml.

Precision: The intraday precision of the assay method was evaluated by conducting six replicate injections of TDF standard solution. The percentage of relative standard deviation (RSD) was calculated for the concentration of the TDF obtained from six replicate injections. For interday precision under the same experimental conditions the TDF samples were prepared and injected on different days and percent RSD was calculated.

Linearity: The linearity of an analytical procedure is its ability (within a given range) to obtain test results that are directly proportional to the concentration of the analyte in the sample. Linearity test solutions for the assay method were prepared from a stock solution at six concentrations in the range from 10μg/ml to 60μg/ml. Regression analysis was performed by least-squares using the peak area versus concentration data.

Accuracy and recovery: Accuracy was determined by recovery studies of TDF known amount of standard was added to the preanalyzed sample and subjected to the proposed HPLC analysis. The study was done at three different concentration levels.

Robustness: To determine the robustness of the developed assay method, experimental conditions were purposely altered and the content of the TDF was determined. To study the effect of flow rate on the assay, it was changed to 0.90 and 1.1ml/min. The effect of pH was studied by changing the pH of the mobile phase from 2.4 to 2.6 and 2.2. The rest of components components of the mobile phase were kept constant, as stated previously.

Analysis of solid lipid nanoparticle formulation: An amount of solid lipid nanoparticle formulation equivalent to 30mg of TDF was taken in a 100ml volumetric flask. organic solvent comprising of 1:1 ratio of acetonitrile and methanol of volume 6ml of was added to dissolve lipid of formulation, sonicated in sonicator for 15min. 15ml of mobile phase was added and the mixture was vortexed for 5 min, then volume was made up to 100ml with mobile phase. The sample was filtered using 0.45mm syringe filter and 1ml of solution was diluted to 10ml in volumetric flask with mobile phase and injected into the HPLC system. The percentage content of TDF was calculated by using the regression equation. Three determinations were performed.

Method development and optimization: The primary criteria for the development of HPLC method for the assay of TDF was that the method should be able to separate degradants of forced degradation study within a shorter run time and should be accurate, reproducible, robust and stability-indicating. Accordingly the primary objective of the chromatographic method was to achieve a better peak shape with mobile phases containing water and buffers like phosphate and using organic modifiers like acetonitrile in the mobile phase. Phosphate buffers with different concentrations were tried out and 20mM buffer strength was selected. Lower pH 2.4 resulted in better peak shape and symmetry. The best chromatographic output was achieved on a Waters Reliant C18 column (USA) (250mm long, 4.6mm internal diameter, particle size 5µm).

The monitored system suitability parameters were USP tailing factor and system precision. Various compositions were tried out and the retention time of around3.2min was found to be ideal with no interference at 50:50ratios. The USP tailing factor for the TDF peak was not more than 2.0 and the RSD for the peak area of six replicate injections of standard solution of TDF was not more than 1.0 as mentioned in Table 1.

Typical chromatograms of TDF and SLN formulation chromatogram are as shown in Fig. 2 and 3 respectively.

Forced degradation studies: The TDF sample showed degradation under acid, base, oxidative and photolytic stress conditions as shown in Table 2.

Peak purity test results derived from the PDA detector confirmed that the TDF peak is homogeneous and pure in all analyzed stress samples. The chromatograms of forced degradation studies are shown in Fig. 4.

Specificity: When placebo (excipients present in nanoparticle formulation other than the drug) was injected there was no interference observed at the retention time of TDF in the developed chromatographic condition as indicated by chromatogram of placeboin Fig. 5.

Precision: The percent RSD for intraday precision and interday precision studies for the assay of Tenofovirdisoproxilfumarate was found to be 0.968 and 0.461 respectively which is within 2.0, thus confirming the precision of the method.

Linearity: The plot of peak area of TDF versus concentration ranging from 10 to 60 mg/ml was linear, and the data were subjected to statistical analysis using a linear regression analysis with least-squares. The linear regression equation and correlation coefficient were y = 46170x - 10357 and 0.9977 respectively. The RSD values for the peak areas of TDF at each level are within 2.0. These results showed that good correlation existed between the peak area and concentration of the analyte. 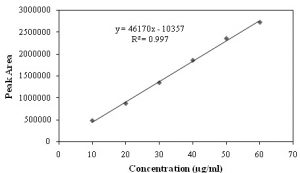 Accuracy: The accuracy of the assay method was evaluated in triplicate at three concentration levels at 24, 30 and 36mg/ml, with respect to specification level, which is 30 mg/ml. The same procedure was adopted for SLN formulation. The percentage recovery of TDF in bulk drug samples and SLN formulation was found in the range of 99.12–100.76% and 92.57–103.56%, respectively.

Robustness: No significant change in the assay value was observed for any of the deliberately varied chromatographic conditions. The system suitability parameters like tailing factor (1.06 to 1.16) and RSD values are well within the limits, which confirm the robustness of the developed method.

LOD and LOQ: Limit of detection and limit of quantification were calculated by using slope method (3.3 × SD/S and 10 × SD/S respectively) and found to be 0.228μg/ml and 0.691μg/ml respectively.

Application of the assay method for the analysis of the formulation: The drug content of the solid-lipid nanoparticle formulation when analyzed by the proposed method was found to be 97.94%.

CONCLUSION: A simple, specific and reliable isocratic HPLC-DAD method was developed for the estimation of developed RP-HPLC isocratic method for the determination of TDF assay in bulk active pharmaceutical ingredient and solid-lipid nanoformulation was found to be specific, precise, accurate and robust. The stability-indicating nature of the proposed method was established by performing forced degradation studies, which provided the degradation behaviour of TDF under various conditions. The method validation data showed satisfactory results for all tested method parameters. Hence, the developed HPLC method can be used for assay of solid-lipid nano-formulation and for stability of bulk samples of Tenofovirdisoproxilfumarate.

ACKNOWLEDGMENTS: We are thankful to SVKM’s management for providing the facilities required for the research work.