ABSTRACT: A Simple, sensitive, precise, and stability-indicating method was developed for the simultaneous estimation of Telmisartan & Metformin HCl in bulk & prepared formulation. The column used for the separation was Phenomenex C18 (150 × 4.6, 5 µ), with a mobile phase containing Phosphate buffer pH 3.6 & acetonitrile (30:70% v/v) at a flow rate of 0.5 ml/min. The retention time of Telmisartan was 6.098 min & Metformin HCl was 2.828 min, respectively. The detection of drugs was carried out at 249 nm. The linearity was carried out at 10-60 µg/ml for Telmisartan & Metformin HCl, in bulk and prepared tablet dosage form. LOD and LOQ were calculated as 0.773 µg/ml and 1.286 µg/ml for Telmisartan, 2.345 µg/ml, and 3.898 µg/ml for Metformin HCl. The drugs were stressed in conditions such as Acidic, Basic, Thermal, Photolytic, and oxidative conditions. All the developed parameters were within the acceptance criteria of ICH guidelines. The developed method was simple, precise, specific, robust and rapid for the quality control analysis for simultaneous determination of Telmisartan & Metformin HCl, respectively.

INTRODUCTION: Telmisartan is an angiotensin receptor blocker drug used in the treatment of hypertension. IUPAC name is [4-[4-methyl-6-(1-methylbenzimidazol-2-yl) -2- propylbenzimidazol-1yl] methyl] phenyl] benzoic acid 1. Metformin is a biguanide used in the treatment of diabetes mellitus. IUPAC name of drug is 3-(diamino-methylidene)-1,1dimethylguanidine; hydrochloride 2.

Literature survey stated that there are many analytical methods available for Telmisartan & Metformin HCl alone and in combination with other drugs. Only the RP-HPLC method has been reported for simultaneous estimation of Telmisartan & Metformin HCl & also, there is no combined dosage form is available in the market 5, 6. Till date, there is no single stability-indicating RP-UFLC method was reported.

Advantage of combined formulation of Telmisartan & Metformin Hydrochloride is, Telmisartan act as an adjunct to the Metformin; it helps to prevent ischemic heart diseases in diabetes patient. It also helps in the activation of the peroxisome proliferator-activated-γ receptor (PPAR- γ), which helps to regulate insulin & glucose metabolism.

Hence to improve the glucose metabolism & vascular blood pressure Telmisartan is given along with Metformin Hydrochloride 6. 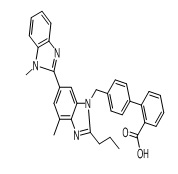 Objective of Study: The objectives of present research work are to to develop a simple, fast, robust, specific develop RP-UFLC method for simultaneous estimation of Telmisartan & Metformin HCl in bulk drugs & newly formulated tablet dosage form & to validate the methods according to the ICH guidelines 3.

The HPLC grade Merck company Methanol and Acetonitrile were supplied from the chemical storeroom of KLE College of Pharmacy, Belagavi.

Instrument and Software: A UFLC- Shimadzu Prominent-LC 20AD instrument & Lab solution software was used. The autosampler injector with reciprocating pump. A PDA detector was used. The weighing balance was used was unibloc & the Ultrasonicator was branson-1800. The chromato-graphic conditions of the developed method were specified in Table 1 and Chromatogram in Fig. 5.

Preparation of Mobile Phase: 3.4 gm of potassium dihydrogen orthophosphate in 500 ml HPLC grade Millipore water to get the solution of 0.02 M phosphate buffer and acetonitrile HPLC grade filtered through PTFE filter. The buffer solution was filtered & degassed for 15 min.

The fast-dissolving action was formulated using various super disintegrants by the direct compression method. The assay & accuracy were performed from the formulated tablets 10, 11.

Assay of Formulated Tablet: 10 tablets were weighed & weighed equivalent to 10mg of Telmisartan & Metformin HCl were transferred in a 25 ml volumetric flask. The half quantity methanol was added & sonicated for 20min. The volume was adjusted up to the mark with the solvent & mixed well. The solution was filtered through a 0.45 µ nylon filter. The final concentration were made 40 µg/ml of Telmisartan & 40 µg/ml of Metformin HCl. Each 10 µl solution was injected in the system (n=3) as the same chromatographic condition as described above. From the peak area of the Telmisartan & Metformin HCl, the % Assay and Accuracy were calculated. The data were presented in Tables 6 and 9.

Method Validation: The developed method was validated in terms of Linearity, System suitability, Precision, Ruggedness, Robustness, Stability, etc. as per the ICH guidelines 4.

Linearity: The working stock solution was prepared by aliquots of stock solution in the concentration range from 10-60 µg/ml for Telmisartan & Metformin HCl. The solutions were injected in triplicates & the mean value of peak areas were taken. The calibration curve was plotted and coefficient correlation (r2) was determined. The regression equation for Telmisartan was Y = 12689x - 16844 & Y = 8787.6x + 57079 for Metformin HCl. The correlation coefficient was 0.999 for both drugs. The result of linearity is mentioned in Fig. 3 and 4.

Precision: The precision was determined in terms of Intraday & Interday precision. The precision was carried out in triplicates & results showed good reproducibility with % RSD less than 2%. The results were shown in Table 4.

Ruggedness: It was performed by a change in analyst & instrument within the laboratory or in a different laboratory & instrument. The results showed not much deviation with % RSD less than 2% denoted in Table 5.

Robustness: Robustness was performed by a small variation in the chromatic conditions.

The conditions are changed in mobile phase composition, change in flow rate, change in wavelength, change in temperature, and change in pH. It was observed that there is no much difference found in the results. Table 8 can conclude that the proposed method is robust.

Stability: Stability was carried out in Freeze and in bench conditions at 24, 48, and 72 h study in stable condition. Table 10 shows the better stability condition. 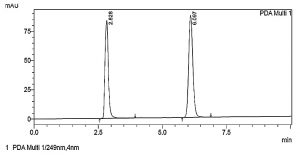 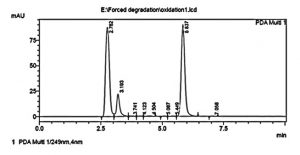 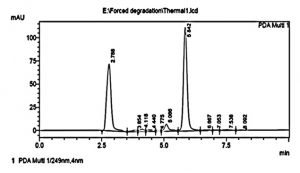 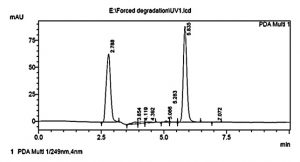 CONCLUSION: The stability-indicating RP-UFLC method was developed & validated for the simultaneous estimation of Telmisartan & Metformin HCl in bulk drugs & in the prepared formulation. The developed method has given good resolution with a retention time less 10 min & the flow rate was 0.5ml/min. The prepared formulation gave assay & accuracy value within 90-110%. The method was validated according to the ICH guidelines. Any change in parameters does not give any change in result so, it can be concluded method is robust, simple, precise, fast & specific & can be utilized for the daily quality control analysis.

CONFLICTS OF INTEREST: The authors have declared no conflicts of interest.