DEVELOPMENT AND VALIDATION OF STABILITY INDICATING UV SPECTRO-PHOTOMETRIC METHOD FOR THE ESTIMATION OF BENZYDAMINE HYDROCHLORIDE IN BULK AND IN PHARMACEUTICAL DOSAGE FORM: A NOVEL ANALYTICAL TECHNIQUE FOR CONDUCTING IN-VITRO QUALITY CONTROL TESTS

DEVELOPMENT AND VALIDATION OF STABILITY INDICATING UV SPECTRO-PHOTOMETRIC METHOD FOR THE ESTIMATION OF BENZYDAMINE HYDROCHLORIDE IN BULK AND IN PHARMACEUTICAL DOSAGE FORM: A NOVEL ANALYTICAL TECHNIQUE FOR CONDUCTING IN-VITRO QUALITY CONTROL TESTS

ABSTRACT: The objective of the present study is to develop and validate a novel stability indicating UV spectrophotometric method for estimation of Benzydamine Hydrochloride (BNZ) in pharmaceutical dosage form as not a single UV spectrophotometric method has been reported for the estimation of Benzydamine Hydrochloride, which makes the present work novel. In the present research work, UV spectrophotometric determination was carried out at an absorption maximum of 305.6 nm in pH 6.8 phosphate buffer. The purposed method was validated statistically for linearity, accuracy, precision, repeatability, ruggedness, sensitivity as per International Conference on Harmonization guidelines. The drug substance was exposed to acid hydrolysis, alkaline hydrolysis, oxidative degradation, photolytic degradation, and thermal degradation and the stressed samples were analyzed by the proposed method to demonstrate the specificity of the method. The application of developed method was established by performing the assay of pharmaceutical formulation. The proposed method obeyed beer lambert’s law in the concentration range of 5 - 50 µg ml-1 with correlation coefficient (r2) of 0.999.  Percentage relative standard deviation associated with all the validation parameters were ≤ 2%. There were no significant changes in absorbance after performing the forced degradation studies and the % age drug recovery was found to be 98.53% and 98.53% for film and gel respectively. The proposed method was found to be novel, simple, rapid, precise, selective, reproducible economical and stability indicating can be successfully applied to the determination of Benzydamine Hydrochloride in bulk and in pharmaceutical dosage form.

It is an official drug in British Pharmacopoeia 1. It is a unique non-steroidal anti-inflammatory drug (NSAID) with local anaesthetic and analgesic properties. It provides beneficial effects after both topical and systemic administration.

By acting locally it inhibits the release as well as the response of inflammatory mediators i.e. mainly thromboxanes 2. The action of Benzydamine is believed to be mediated by the prostaglandin system. The drug may affect formation of thromboxanes and alter the rate of prostaglandin produced, inhibiting platelet aggregation and stabilizing cell membranes.

The primary site of metabolism is the liver; derivatives and free Benzydamine are excreted by the kidney and in the bile 3. The Empirical Formula of Benzydamine Hydrochloride is C19H23N3O.HCl. Physically it is a white crystalline powder with a molecular weight of 345.9. It is very soluble in water; freely soluble in ethanol (96%); practically insoluble in ether 4. The structure is given in Fig. 1. 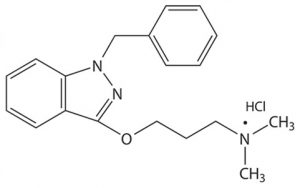 Apparatus: A double beam UV Spectro-photometer (Systronics), model UV-2201 (India) with a spectral  bandwidth of 1nm, wavelength accuracy of ± 0.5 nm and a pair of 1 cm quartz cells were used to measure absorbance of the resulting solutions.

Preparation of Standard Stock Solution and Working Solution: 100 mg of BNZ was weighed accurately and transferred into a 100 ml volumetric flask and dissolved in phosphate buffer of pH 6.8.  Then the solution was diluted up to the mark with phosphate buffer (pH 6.8) to obtain the solution having strength of 1000 µg ml-1 (Standard Stock Solution). 10 ml of this solution was taken into a 100 ml volumetric flask was diluted up to 100 ml to get the solution of 100 µg ml-1 concentration (working Solution) 11.

Determination of Absorption Maxima (λmax): The absorbance of the working solution was scanned in the range of 200 - 400 nm on UV spectrophotometer 11.

Validation of the Proposed Method: The method was validated in terms of linearity, accuracy, precision, repeatability, robustness, ruggedness, sensitivity and forced degradation study.

Accuracy (Percentage Recovery): Accuracy  is  the  percentage  of  analyte  recovered  by  assay  from known added amount. Solutions were prepared in triplicate at levels of 50%, 100% and 150% of 20 µg ml-1 test concentration of the sample solution using working Standard solution as per the test method and taken absorbance of each solution in triplicate 13.

Precision: Precision is the degree of repeatability of an analytical method under the normal operation conditions. The precision was determined with standard quality control samples prepared in triplicate at different concentration levels covering the entire linearity range. The  precision of assay was determined by repeatability (intra-day), intermediate precision (inter-day) and reported as % RSD for a statistically significant number of replicate measurements. The intermediate precision was studied by comparing the assay on three different days and the results were documented as standard deviation and % RSD 14.

Robustness: The robustness of an analytical method is the measure of its capacity to remain unaffected by small, but deliberate variations in method parameters and provides an indication of its reliability during normal usage. Robustness was tested by varying detection wavelength (±2 nm) of optimized conditions from the standard detection wavelength (305.6 nm) 16.

Ruggedness: Ruggedness of the method was determined by analysing repeatedly for six times the standard solution having 30 µg ml-1 of BNZ by two different analysts using the same experimental and environmental conditions 17.

Sensitivity: Sensitivity of an instrument can analysed by determining the two parameters as follow:

The LOD and LOQ were based on the third approach and were calculated according to the 3.3 𝜎/S and 10𝜎/S criterions, respectively, where 𝜎 is the standard deviation of the 𝑦-intercepts of the regression lines and s is the slope of the calibration curve 18.

Forced Degradation Study (Stress Conditions): A 2 ml of the standard stock solution (1000 µgml-1) of BNZ was taken as four replicates in four different volumetric flasks of 100 ml and mixed with 10ml of following (1 - 3) solutions. Then, all the flasks were set aside for 1 hour at room temperature. Solution was diluted up to mark with double distilled water.

Allowed the solution to stand overnight for 24 hours for removal of all bubbles in the solution. Then the resulting solution was poured into the petridish and allowed to dry at room temperature for 24 hours 20. For gel formulation, 1% w/w of HPMC K 100M was taken into 100 ml beaker and was allowed to wetting for 24 Hrs. After that the volume was made up to 100 ml using double distilled water. The polymer was dissolved completely using magnetic stirrer. Then BNZ and methyl paraben were added (0.15% w/w of both) in the above solution and was mixed well 21.

Assay of BNZ in Mucoadhesive Film and Gel Formulation: To determine the drug content uniformity three films containing (3 mg of drug) were taken in separate 100 ml volumetric flask. 100 ml of pH 6.8 phosphate buffer was added and continuously stirred for 24 hrs. The solutions were filtered and analyzed at 305.6 nm by UV Spectrophotometer. The average of drug contents of three films was taken as final reading 22. 100 mg of prepared gel (equivalent to 1.5 mg of BNZ) was weighed accurately and it was dissolved in 100 ml of phosphate buffer of pH 6.8. The conical flask containing gel was shaken for 2 hrs on mechanical shaker in order to get complete solubility of BNZ. The resulting solution is filtered through whatmann filter paper, the BNZ content was analyzed spectrophotometrically at 305.6 nm using an UV spectrophotometer (Systronics, India). The measurement was carried out in triplicate and the average BNZ content in the topical gel was calculated 23.

Determination of Absorption Maxima (λ max): The standard stock solution (100 µg ml-1) of Benzydamine Hydrochloride showed absorbance maximum (λ max) at 305.6 nm (Fig. 2), and this wavelength is selected for constructing the calibration plot as well as for further analysis of drug.

Accuracy (Percentage Recovery): The accuracy of the proposed method was calculated from the slope and Y-intercept of the calibration curve. The % age recovery for this method for all the three concentration levels ranged between 98.80% to 100.08% with mean % age RSD of 0.360. The mean value of % age accuracy study was found to be greater than 99.0% demonstrate the high accuracy of the proposed method. The recovery data for accuracy studies are given in Table 1. 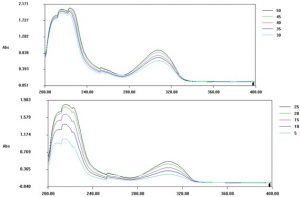 *Each value is the average of three determinations; RSD: Relative Standard deviation.

Repeatability: The repeatability of the instrument was validated by taking the absorbance of six samples of the same concentration (20 µg ml-1). The mean concentration found was 19.78 µg ml-1.

The SD and the % RSD were in the given limits (≤ 2%) indicates that the proposed method is repeatable as shown in Table 3.

Robustness: Robustness studies assumed that the small variations in any of the variables did not significantly affect the results as given in Table 4.

This provided an indication for their liability of the proposed method during routine analysis.

Ruggedness: The results did not show any major statistical difference between operators suggesting that method developed was rugged as given in Table 5.

Sensitivity: LOD and LOQ of the drug were calculated as per ICH guideline. LOD and LOQ values for BNZ were found to be 1.00 µg ml-1 and 3.04 µg ml-1 respectively.

TABLE 6: RESULTS FOR STABILITY OF DRUG UNDER FORCED DEGRADATION STUDY

*Each value is the average of three determinations.

Assay of BNZ in gel formulation: The validated UV spectrophotometric method was applied to the direct estimation of BNZ HCl in mucoadhesive film and gel formulation using calibration curve method. From the absorbance value, the drug content was calculated. The results were found as shown in Table 7.

TABLE 7: RESULTS OF THE ASSAY OF PHARMACEUTICAL FORMULATION

All the validation parameters are summarized in Table 8, showed that proposed UV spectro-photometric method was found to be novel, rapid, simple, precise, selective, reproducible and economical.

TABLE 8: SUMMARY OF ALL THE VALIDATION PARAMETERS

CONCLUSION: The developed UV spectro-photometric method was found to be novel, rapid, simple, precise, selective, reproducible and economical. The results reveal that the proposed UV spectrophotometric method can be successfully applied for the routine quality control analysis of Benzydamine Hydrochloride in bulk and in pharmaceutical dosage form and cost of analysis is less and do not require sophisticated instrumentation as compared to reported methods.

ACKNOWLEDGEMENT: The authors are grateful to I. K. Gujral Punjab Technical University, Kapurthala, Rayat Bahra Instittue of Pharmacy, Hoshiarpur and ASBASJSM College of Pharmacy, Bela, Ropar, Punjab for the providing us the facilities for carrying out this research work. The authors would also thankful to Harika Drugs Pvt. Ltd., Hyderabad for providing the gift sample of Benzydamine Hydrochloride and Colorcon Asia Pvt. Ltd., Goa for providing the gift sample of HPMC K100M polymer.