ABSTRACT: The kinetic of conjugated reactions of S-oxidation and perhydrolysis of Mezlocillin (Mezl) with potassium caroate in alkaline medium is studied by the increase of forming product light absorbance at 290 nm. Baypen® – powder Mezl sodium monohydrate in flacons for preparation of solution for injections (Mezl 1.0 g). Peroxomonosulfate acid as triple potassium salt 2КНSO5∙КНSO4∙K2SO4 (Oxone®) of “extra pure” qualification was used as oxidant. A scheme of peroxoacid oxidation and perhydrolysis conjugated reactions of Mezl by means of potassium caroate is proposed. A new spectrophotometric method for quantitative determination of sodium Mezl in Baypen ® preparation using potassium caroate (KHSO5) as analytical reagent was proposed. At pH 3-4 for 1 mole of penicillin, 1 mole of KHSO5 is consumed, the quantitative interaction is achieved within a time of more than 1 min (observation time). The results were obtained by the recommended procedure for seven replicate titrations of mixtures containing the three species at various concentrations. RSD = 1.32%, δ = +0.49%. It can be seen that Mezl can be determined successively with good accuracy and reproducibility. The new procedure was developed and ability of quantitative determination of penicillin in pharmaceutical preparation Baypen® by spectrophotometric method using potassium caroate (KHSO5) as analytical reagent was shown.

INTRODUCTION: Mezlocillin is a broad-spectrum penicillin antibiotic. It is active against both Gram-negative and some Gram-positive bacteria. Unlike most other extended spectrum penicillins, it is excreted by the liver, therefore it is useful for biliary tract infections, such as ascending cholangitis.

Like all other beta-lactam antibiotics, mezlocillin inhibits the third and last stage of bacterial cell wall synthesis by binding to penicillin binding proteins. This ultimately leads to cell lysis 1. Mezl can be made in a variety of ways including reaction of ampicillin with chlorocarbamate 1 in the presence of triethylamine.

Chlorocarbamate 1 itself is made from ethylenediamine by reaction with phosgene to form the cyclic urea followed by monoamide formation with methanesulfonyl chloride and then reaction of the other nitrogen atom with phosgene and trimethylsilylchloride. The closely related analogue azlocillin is made in essentially the same manner as mezlocillin, but with omission of the methylation step 2. Mezl has in-vitro activity against gram-positiv and gram-negative aerobic and anaerobic bacteria. The bactericidal activity of mezlocillin results from the inhibition of cell wall synthesis and is mediated through mezlocillin binding to penicillin binding proteins (PBPs). Mezl is stable against hydrolysis by a variety of beta-lactamases, including penicillinases and cephalosporinases and extended spectrum beta-lactamases. Mezl can be used to treat susceptible stains of H. influenzae, Klebsiella species, Pseudomonas species, Proteus mirabilis, E. coli, Enterobacter species, Streptococcus faecelis, Peptococcus species, Peptostreptococcus species, Bacteriodes species, Serratia species, P. vulgaris and Providencia rettgeri 3.

Anti-biotics are often used in clinical in-vitro tests known as antimicrobial susceptibility tests or ASTs to determine their efficacy against certain bacterial species. They are tested against gram-negative and gram-positive bacteria using panels, discs and MIC strips by medical microbiologists. ASTs decrease the risk of using an antibiotic against bacteria exhibiting resistance to it and the results are used in clinical settings to determine which antibiotics to prescribe for various infections. β-lactams inhibit the formation of peptidoglycan cross-links within bacterial cell walls by targeting penicillin-binding proteins or PBPs. Consequently, the bacterial cell wall becomes weak and cytolysis occurs. Resistance to β-lactam antibiotics occurs in the presence of cells containing plasmid encoded extended spectrum β-lactamases or ESBLs 4.

The β-lactam group is one of the most important families of antibiotics used in veterinary medicine and has been widely used for decades in animal husbandry. Penicillins are commonly used antimicrobials for the treating, controlling, and preventing of animal diseases. The extensive use of penicillins may cause the presence of their residues in food products of animal origin and may have side effects to consumers. Moreover, penicillin residues in food products may be responsible for allergic reactions in humans and promote the occurrence of anti-biotic resistant bacteria. Therefore, rapid and sensitive methods are needed for the routine to monitor the presence of residues in animal tissues 5.

International Pharmacopoeia recommends to determine penicillin summary in semisynthetic penicillin by neutralization method after preparation hydrolysis by excess of sodium hydroxide titrated solution at heating 6. According to State Pharmacopoeia of Ukraine (SPHU) and European Pharmacopoeia (EPH) penicillin quantitative determination is performed by high performance liquid chromatography (HPLC). The following quantitative procedures of penicillin determination are described: using potentiometry titration and ionometry, spectrophotometry, extraction photometry, voltammetry and polarography, micelle electro kinetic capillary and paper chromatography, Chemiluminescence, electrophoresis and kinetic analysis methods 7-19. It is based on the preliminary oxidation of Mezl with potassium caroate excess to the corresponding S-oxide, followed by determination of the hydrolytic conversion of its product in an alkaline medium by the kinetic- spectrophotometric method (Initial rate (tangent) method) 20.

Manufacturer Bayer Aktiengesellschaft (Germany) was studied in the presented work as a medical preparation. Potassium caroate was used as an oxidant in the view of a triple potassium salt (2КНSO5∙КНSO4∙K2SO4) of an “extra pure” grade. The commercial name is Oxone® with the content of active Oxygen 4.5%. It is available, has good solubility and stability in water. It was proposed for cefadroxil kinetic spectrophotometric deter-mination as an analytical reagent. Standard electrode potential for redox semi reaction is 1.8 V 21. The procedure of potassium caroate standard solution is following. 0.615 mg of Oxon was transferred in 100 mL volumetric flask and diluted to the mark with double distilled water at 20 ºС. The solution of potassium caroate was standardized iodometrically. Electrochemical measurements were carried out in the spectrophotometer SF-46 (LOMO); kinetics was studied by the produced product light absorbance at 290 nm. The optical density of the solution was studied in the cell with a thickness of absorbing layer l = 1 cm. Solutions were thermo stated in UTU-2 (Zeamit, Horizont Krakow-Poland) before mixing, time was recorded using stopwatch after mixing. The 0.1 mol L-1 solution of sodium hydroxide without carbonates was used to create and maintain the required acidity. Processing of the results was carried out by “tangent method” (the differential version). Rate was estimated by the slope of the linear section of the kinetic curve A – time (tgMezl, min-1).

Kinetic measurements were made by using a Cary 15 recording spectrophotometer which a constant-temperature bath connected to the cell holder. Measurements of the pH were made on potentiometer (Gomel, Belarus, I-160 Model). The method on initial rates (tangent method) was used to collect kinetic data (usually at 290 nm) by following the appearance product of perhydrolysis reaction of Mezl. A solution of sodium hydroxide was thermo stated in the cell compartment and then mixtures of solutions of Mezl with solutions potassium caroate (time incubation of 1 min) were added to the cell. The resulting solution was mixed thoroughly and put into the spectrophotometer. The precision of rate determination was usually ± 2-5%.

Aliquots of 0.50-10.00 mol L-1 of the studied Mezl test solutions were pipetted into a series of 50 mL volumetric flask containing 5 mL of 2 × 10-2 mol L-1 KHSO5 solution and mixed well. 5 mL of 0.06 mol L-1 NaOH solution was added to the flask brought to the mark and missed well. The stopwatch was switched on after the alkali solution addition. The increase in absorbance of the obtained solution at 290 nm was recorded as a function of time for 10 min against reagent blank. It shows the dependence of Mezl alkaline solutions absorption against time at 290 nm. They have linear dependence during first 10-15 min. The initial rate of the reaction at different concentrations was obtained from the slope of the tangent to absorbance time curves. The calibration graph was constructed by plotting the tangent of the initial rate of the reaction versus concentration of Mezl (с, µg mL-1).

RESULTS AND DISCUSSION: The results of the experiment showed that the order of mixing influences on the kinetics and yield of the reaction. The highest rate of product accumulation was observed only after prior mixing of the sample of Mezl under study with potassium caroate, and therefore with alkali solution. Maximum activity of potassium caroate in the reaction was achieved at concentrations 2 × 10-3 mol L-1. A structure Mezl is presented on a Fig. 1. 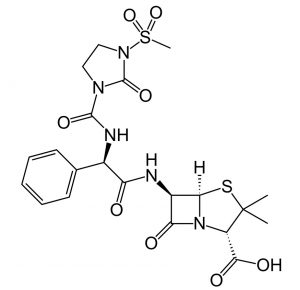 TABLE 1: DETERMINATION OF MEZL BY METHOD WITH USE KHSO5 AS OXIDIZING AGENT 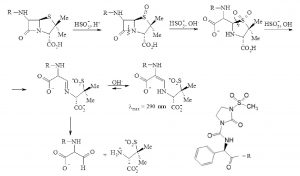 FIG. 4: THE SCHEME OF PEROXO ACID OXIDATION AND PERHYDROLYSIS CONJUGATED REACTIONS OF MEZL

The calibration plot for kinetic determination of Mezl n optimum conditions is given on the Fig. 4. The tgα linear concentration dependence was observed within the Mezl content in solution 1-50 µg mL-1. This was a precondition for the possibility of using the kinetic method in the analysis. 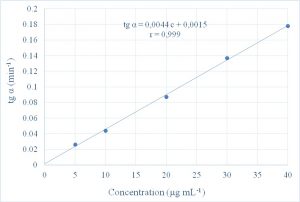 The procedure of Mezlocillin assay in flacons. Mezl sodium (ca 600 mg) was weighed accurately, dissolved in water and diluted to 100 ml. The content of mixture was mixed well. 4.0 mL of obtained solution was transferred in 50 mL volumetric flask, further as while calibration graph construction.

The resulting solution was measured photometrically in a quartz cuvette at 290 nm against distilled water (compensation solution) during first 15 min every min and the absorbance kinetic curve against time was constructed. The slop of the linear section of the kinetic curve, tg α was determined. The content of C21H25N5O8S2, in g, in one flacon (XMezl) was calculated using the equation:

The results of the Mezl quantitative determination are given in the Table 2. The proposed method has good accuracy, RSD = (0.96 -2.02) %.

CONCLUSION: The reaction kinetics of the peroxyacidic oxidation and perhydrolysis of Mezl with potassium caroate in the alkaline medium is studied. As an oxidizing agent, the potassium triple salt of peroxymonosulfuric acid, 2KHSO5∙ KHSO4∙K2SO4, syn. “Oxone” was applied.

The procedure was developed and the possibility of the quantitative determination of Mezl in the Baypen® preparation based on the results of the kinetic-spectrophotometric method with potassium caroate as reagent was shown. RSD = 1.32%, δ = + 0.49%.