Two simple, sensitive, rapid, accurate and economical methods were developed for the estimation of Metronidazole and Ofloxacin in two component liquid dosage form. First method is based on the simultaneous equation and second method is based on Q-analysis (absorbance ratio method). Metronidazole has absorbance maxima at 318.0 nm and Ofloxacin has absorbance maxima at 294 nm in acetonitrile and diluent(70:30) solvent PH of 9.89. The linearity was obtained in the concentration range of 5-30 μg/ml for Metronidazole and 3-18 µg/ml for Ofloxacin. In the first method, the concentrations of the drugs were determined by using simultaneous equations and in second method, the concentration of the drugs were determined by using ratio of absorbances at isoabsorptive point and at the λ-max of one of the drug.  The results of analysis have been validated statistically and by recovery studies. 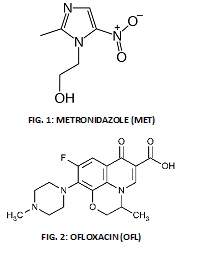 This prompted the present work. The aim of the present work is to develop a simple, rapid, accurate and precise UV-visible spectrophotometric method for simultaneous estimation of MET and OFL in their marketed formulation.

Apparatus: A Shimadzu model 1700 double beam UV–visible spectrophotometer with spectral width of 2 nm, wavelength accuracy of 0.5 nm and a pair of 10 mm matched quartz cells was used to measure absorbance.  Mettler Toledo analytical balance CX-204 was used for weighing and an ultrasonic cleaner (Frontline FS 4) were used in the study.

Acetonitrile (spectroscopic grade) and KH2PO4 obtained from Finar Chemicals, India was used for the study.

Preparation of Buffer Solution: Take 0.68 gms Dihydrogen ortho phosphate and mix with 100 ml water mix it in 1000ml volumetric flask. Now add 70 ml methanol and mix it. After mixing, make up the volume upto mark with the help of water. The pH of the Buffer is 9.3

Preparation of Standard Solvent Solution: Take 30ml Buffer in 100ml volumetric flask and make the volume upto mark with the help of 70ml Acetonitrile. Now make (acetonitrile and phosphate buffer 70:30) the standard solvent as par requirement. The pH of solvent is 9.89 and this solution used through out study in dilution.

Preparation of Standard Stock Solutions: Accurately weighed portion of MET (10 mg) and OFL (10 mg) were transferred to two different 100 mL volumetric flask. The volume was made up to mark with the prepared diluents solution to obtain standard stock solution having concentration of 100µg/mL of MET and OFL each. 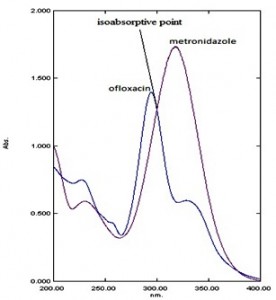 Six standard solutions having concentration 5, 10, 15, 20, 25 and 30μg/mL for MET and 3, 6, 9, 12, 15 and 18μg/mL for OFL were prepared by appropriate dilutions from their respective standard stock solutions. The absorbances of resulting solutions were measured at 318.0 nm and 294.0 nm and absorptivity coefficients were calculated using Beer Lambert law. The graph of absorbance Vs concentration was plotted at each wavelength and regression coefficients were calculated (fig. 4 and 5). 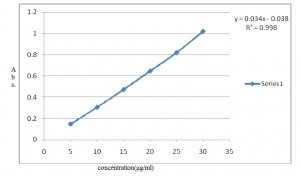 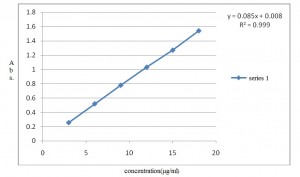 The concentrations of both drugs were calculated by solving these simultaneous equations.

Where; Cx & Cy are concentrations of MET and OFL respectively in gm/100 ml in the sample solution.

Method II:  Absorbance ratio method (Q-Analysis): Absorbance ratio method uses the ratio of absorbances at two-selected wavelength one which is an “isoabsorptive point” and other being the λ-max one of the two components. From the overlay spectra of two drugs (Fig. 3) it is evident that MET and OFL showed an isoabsorptive point at 300 nm. The second wavelength selected as 294.0 nm, λ-max of OFL.

Six standard solutions having concentration 5, 10, 15, 20, 25 and 30μg/mL for MET and 3, 6, 9, 12, 15 and 18μg/mL for OFL were prepared by appropriate dilutions from their respective standard stock solutions. The absorbances of resulting solutions were measured at 300.0 nm and 294.0 nm and absorptivity coefficients were calculated using Beer Lambert law.

The graphs of absorbance Vs concentration were plotted at each wavelength and regression coefficients were calculated (fig. 4 and 5).

A1and A2 are absorbances of the mixture at 1 and 2 wavelength respectively.

Analysis of Marketed Formulation: For determination of the content of MET and OFL marketed formulation, pipette out accurately a volume of suspension equivalent to 100 mg of MET (50 mg OFL) in 100 mL volumetric flask. The volume was made upto the mark with prepared diluent and sonicated for 30 min. Further dilution was made from this solution to get final working concentration of MET (20µg/mL) [OFL (10µg/mL)].

For Method I, the absorbances of the sample solution i.e. A1 and A2 were recorded at318.0 nm and 294.0 nm respectively and concentration of two drugs in the sample were determined using above equation (1) and (2).

For method II, the absorbances of the sample solution i.e. A1 and A2 were recorded at 300.0 nm (isoabsorptive point) and 294.0 nm (λ-max of Ofloxacin) respectively and ratio of absorbance were calculated i.e. A2/A1. Relative concentration of two drugs in the sample was calculated using above equation (3) and (4). The result of analysis of marketed formulation is shown in Table 1.

Validation of Developed Methods: The proposed method has been statistically validated for linearity, accuracy, precision, repeatability and reproducibility, limit of detection (LOD) and limit of quantification (LOQ) as per ICH Q2 guidelines 19.

Linearity was observed in range of 5-30 μg/ml for MET (fig. 4) and 3-18µg/ml for OFL (fig. 5). For precision (intra day and inter day), absorbance of three different concentrations were measured for three times within day and for three consecutive days respectively for both developed methods. The % RSD values were found to be less than 2%.

To perform repeatability, absorbance of concentration nearer to assay concentration was measured for six times consecutively and %RSD was calculated. Reproducibility of the developed method was established by calculating %RSD values of the absorbance measured by different analyst. LOD and LOQ values were determined from mathematical equations. Accuracy (recovery) was determined by spiking different concentrations of pure Metronidazole and Ofloxacin standard (80%, 100% and 120%) in pre-analyzed samples. Absorbance was measured at 294, 300, 318 nm and % recovery was calculated (Table 2).

The results of validation parameters are summarized in Table 3.

RESULTS AND DISCUSSION: The first method employing simultaneous equation is a very simple method and can be employed for routine analysis of these two drugs. Once the absorptivity values are determined very little time is required for analysis, as would require determination of absorbances of the sample solution at two selected wavelength and few simple calculations. In absorbance ratio method (Method II), the primary requirement for developing a method for analysis is that the entire spectra should follow the beer’s law at all the wavelength. This requirement was fulfilled in spectra of both the drugs (Fig. 3).

In this method, the calculations have been minimized by taking one of the measurements as an isoabsorptive point i.e. at 300 nm. As ratio is fixed for a specific mixture, the degree of dilution of two substances does not alter the value of ratio (A2/A1).   Moreover, The value of standard deviation and coefficient of variation were satisfactory and recovery studies ranging from 99.24-99.95% (MET) and 99.44-100.6% (OFL) were indicative of the accuracy and precision the proposed methods.

CONCLUSION: The proposed methods for simultaneous estimation of MET and OFL were found to be simple, accurate, economical and rapid. Due to accuracy, precision and sensitivity, the developed simultaneous equation method and Q-ratio method could be used for routine analysis of MET and OFL in their combined dosage forms.