ABSTRACT: An   UV   spectrophotometric   method   for   the quantitative   determination   of Temozolomide (TMZ) in bulk and capsule   was developed   in   present   work. The parameters linearity, precision, accuracy, limit of detection and limit of quantitation were studied according to International   Conference   on Harmonization guidelines. UV spectroscopic determination was carried out at an absorption maximum of 328 nm using 0.1N Hydrochloric acid as solvent. In the UV spectroscopic method linearity over the concentration range of TMZ was found to be 2-18 µg/ml with a correlation coefficient 0.999. The limit of detection and limit of quantification were found to be 0.5271 and 1.6454 mg/ml respectively.  Results   of the analysis   were   validated   statistically and by recovery studies. The proposed method is simple, rapid, precise, accurate and reliable and can be used for the routine quantitative analysis of TMZ in bulk and pharmaceutical formulation.

INTRODUCTION: Temozolomide (3,4-dihydro-3-methyl-4-oxoimidazo[5,1-d]-as-tetrazine-8-carbo xamide, Fig. 1) is  an  alkylating  agent  of  the Imidazotetrazine derivatives that exhibits broad-spectrum  antitumor  activity  against  murine  tumors1. It is a 3-methyl analogue of mitozolomide [8-carbamoyl-3-(2-chloroethyl)-imidazo-[5, 1-d]-1, 2, 3, 5-tetrazin-4-(3H)-one] which was developed as a potential alternative to dacarbazine, 5-(3-dimethyltriazen-1-yl)-imidazo-4-carboxamide (DTIC) in view of its demonstrated antitumor  activity  and  better  safety  profile  in  preclinical assessments.

Both and DTIC are cytotoxic alkylating agents. It has been suggested that they both exert their antitumor activity through the linear triazine, 5-(3- methyltriazen-1-yl)-imidazo-4-carboxamide 5-6. DTIC is metabolically converted to MTIC in the liver (N-demethylation), whereas temozolomide undergoes chemical degradation to MTIC at physiological pH 6. The cytotoxicity of MTIC is thought to be primarily due to alkylation at the O6 and N7 positions of guanine 7-10. In this process, MTIC itself is converted to 5(4)-aminoimidazole-4(5)-carboxamide. 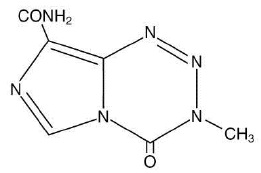 Literature review reveal there is reported a HPLC method for the analysis MTIC in human plasma 11 and stability study of Temozolomide using capillary electrophoresis 12. However, it has the disadvantage of being time-consuming.  All   these studies   have   further emphasized the need to perform rapid and sensitive quality-control analysis of pharmaceutical formulations containing Temozolomide. As these methods are expensive, we have made an attempt to  develop  a  more  precise,  simple  and economical  spectrophotometric method with greater precision,  accuracy   and   sensitivity for  the   analysis of Temozolomide  in bulk and dosage forms.

Selection of solvent: Solubility of drug was performed in several solvents like ethanol, methanol, Hcl and some buffers and then UV-spectra of drugs in these solutions were recorded. Absorbances of drug were higher at distinct λmax in 0.1N HCl and hence 0.1N HCl was selected as solvent for further studies.

Preparation of the standard stock and calibration curve:Accurately weighed quantity of 100 mg Temozolomide reference standard was transferred into 100 ml volumetric flask and dissolved and diluted up to the mark with 0.1N Hydrochloric acid to give a stock solution having strength 1mg/ml. This stock solution used for further dilutions and by using 0.1N HCl as solvent for estimation.

The absorption maxima of temozolomide were found to be 328nm (Fig.1).  Working standard solutions for the drug having concentration 2, 4, 6, 8 and up to 18µg/ml was prepared with 0.1N Hcl from the stock solution. The absorbance of resulting solutions were measured at wavelength of 328nm against solvent blank and a calibration curve was plotted to get the linearity and regression equation. 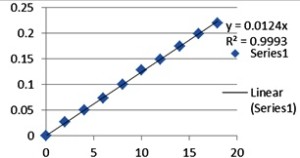 Analysis of marketed formulation: Remove the contents of   10 capsules and weigh a quantity of powder   equivalent to 100mg of Temozolomide and transfer into a 100ml standard flask. And dissolve the formulation in 0.1N hydrochloric acid solvent and allowed to sonicate for 15–20 min. Then pipette out 10ml of solution and make up to 100ml leads to 10µg/ml concentration solution. The absorbance was measured against 0.1N hydrochloric acid solvent as blank at 328 nm. The drug content was estimated by using the standard graph.

Linearity and range: The absorbances of appropriate dilutions of standard stock solutions 2-18 μg/ mL were measured as per the developed method to confirm the linearity. The calibration curve for Temozolomide was constructed byplotting the absorbance temozolomide (Y) against concentration (X) and linearity was evaluated by linear regression equation. The slope, intercept and correlation coefficient values were recorded.

Recovery studies: In order to check the accuracy and reproducibility of the proposed method, recovery studies were conducted. Recovery studies are done spiking method in this method the test sample having the concentration of 10µg/ml. to this the standard drug is spiked by adding into the test solution. Concentrations of 8, 10 and 12µg/ml are added to the sample solutions and the absorbance of the three spiked concentrations was taken. From this absorbance we can determine the amount of drug that can be recovered by the proposed method.

Precision: Precision was determined by studying the repeatability and intermediate precision. The standard deviation, coefficient of variance and standard error were calculated for the drug.

Molar absorptivity: This is the important factor for determining the absorptive property of a drug in 1 mole concentration. And this value can be useful in determining the absorbance of drug in molar concentrations. This for identifying the shifts of the maximum absorbance of the drug during the method development and the results are given in the table 1.

RESULTS AND DISCUSSION: The proposed method for the determination of Temozolo-mide in solid dosage form was found to be precise, selective, rapid and economical. Temozolomide exhibited  maximum absorption  at 328nm  and  obeyed Beer’s law in the concentration range of 2-18µg/ml. the proposed method for the determination of   Temozolomide  showed linear regression y = 0.01195x + 0.00406 with a correlation coefficient (R2) of 0.999 (Figure 3). Our studies revealed a recovery percentage of 99.04, which indicates that the developed method was simple, rapid and precise. The proposed methods can be used for the drug analysis in routine quality control & method proves to be more economical than the published standard methods.

The recovery studies showed proposed method is accurate and reproducible. The results of recovery study revealed that any small change in the drug concentration in the solution could be accurately determined by the proposed method. Accuracy, reproducibility and precision of the proposed methods were further confirmed by percent recovery values, which were close to 100 with low values of standard deviation as shown in Table 3. Repeatability results indicated the precision under the same operating conditions over a short interval time and inter-assay precision. Intermediate precision study expresses within laboratory variation in different days. In both intra and inter-day precision study for the method RSD is not more than 2.0 indicate good intermediate precision. The low values of LOD and LOQ, 0.5271 μg mL-1 and 1.6454 μg mL-1 for Temozolomide indicated good sensitivity of proposed method (Table 4).

CONCLUSION: The results and the statistical parameters demonstrate that the proposed UV spectrophotometric method is simple, rapid, specific, accurate and precise. Thus the developed methods can be easily applied for the estimation of Temozolomide in bulk and capsule dosage form.

ACKNOWLEDGEMENT: The authors are thankful to Dr. Reddys labs pvt .ltd .Hyd, for providing sample of drug and also to the Sree Vidyanikethan College of Pharmacy, Tirupati for providing facilities to carry out the work, and also for their excellent guidance, supervision, continual technical support and invaluableencouragement in the laboratory.