A simple, accurate, cost effective and reproducible spectrophotometric method has been developed for the estimation of Diphenhydramine Hydrochloride in soft gelatin capsule dosage form. For UV spectrophotometric method, maximum absorption was found at λmax 258nm.The percentage recovery of Diphenhydramine Hydrochloride ranged from (98.97 ± 0.2989) in capsule dosage form. The developed method was validated as per ICH guidelines with respect to linearity, accuracy (recovery), precision and specificity. Beers law was obeyed in the concentration range of 10-100μg/ml having line equation y = 0.016x - 0.018 with correlation coefficient of 0.9934. By treating the data statistically and by recovery study, results of study were validated.

INTRODUCTION: Chemically Diphenhydramine Hydrochloride is 2- (diphenylmethoxy) - N, N-dimethylethanamine hydrochloride 1 (fig. 1), is first generation mainly used to treat allergies 2. It is indicated for a powerful hypnotic effect and for this reason it is often used as a non-prescription sleep aid and a mild anxiolytic 3. The DPH also acts as an antiemetic 4. The literature survey reveals that Diphenhydramine Hydrochloride was analyzed by capillary gas chromatography 5, LC-MS 6, Chemiluminescence method 7 and by HPLC 8.

Also the FT-Raman spectroscopy and HPLC method for liquid formulations are reported in literature 9. Analytical chemistry has been important since the early days of chemistry, providing methods for determining which elements and chemicals are present in the world around us. Modern analytical chemistry is dominated by instrumental analysis.

Many analytical Chemists focus on a single type of instrument as UV Spectrophotometer by which analytical method may be developed and helpful for routine analysis in quality control laboratories and to establish quality assurance parameters. Although simultaneous 2nd order derivative UV spectroscopic method for estimation of Diphenhydramine Hydrochloride and naphazoline has been reported by Santon G. et. al., but single estimation of this drug has not been reported in soft gelatin capsule formulation10. Thus the present study was undertaken to develop and validate a simple, sensitive, accurate, precise and reproducible U.V method for Diphenhydramine Hydrochloride. DPH is soluble in 0.1N HCL, Water and in 0.1N sodium hydroxide. The λ max was found to be at 258nm.

Preparation of Stock Solution: 100mg of the pure drug was weighed and transferred to a 100ml volumetric flask, 50ml 0.1N HCL was added to the above flask and dissolved, the volume was made up with the 0.1N HCL.

Preparation of Sample Solution: The average weight of the soft gelatin capsules were determined by weighing 10 capsules, (One capsule DPH equivalent to 25mg) and Four soft gelatin capsules (approx 100mg) dissolved in 0.1N HCL. Frequent shaking given and volume was made up to 100ml mark with 0.1N HcL. The solution was then filtered through Whattman filter paper #41.This filtrate was diluted suitably with 0.1N HCL to get the solution of 50μg/ml concentration. Six replicates of analysis were carried out with sample weighed individually.

Method Validation 11, 12, 13: Various methods for analysis of DPH in soft gelatin capsule were performed and the method was validated according to ICH Q2B guidelines.

Precision and Accuracy: The precision of an analytical procedure express the closeness of agreement between a series of measurement obtained from multiple sampling of the same homogenous sample under the prescribed conditions. The precision of the assay was determined by repeatability (intraday) and intermediate precision (inter-day) and reported as RSD % for a statistically significant number of replicate measurements. The intermediate precision was studied by comparing the assays on two different days and the results were presented as the standard deviation and RSD %. Accuracy is the percent of analyte recovered by assay from a known added amount. Data from triplicate trials over two different concentration levels (50μg/mL and 60μg/mL) covering the linearity range were obtained.

LOD and LOQ: LOD (k= 3.3) and LOQ (k= 10) of the method were established according to ICH definitions. LOD and LOQ of method are reported in Table no 1. In this study, LOD and LOQ were based on the standard deviation of the response and the slope of the corresponding curve using the following equations-

Where S is the standard deviation of the absorbance of the sample and M is the slope of the calibrations curve. The limit of quantification (LOQ) is defined as the lowest concentration of analyte that can be estimated with an acceptable limit of accuracy and precision. The values of LOD and LOQ are given in Table 1.

Stability: The stability of DPH in 0.1N HCL solution was studied by the developed method. Sample solutions (50μg/mL) were prepared in triplicate and heated to maintain 50OC and 60°C for 60min. The absorbance data of these samples reveled information about the stability of DPH.

RESULTS AND DISCUSSION: In the start of the method development for this drug, different solvents were tested such as water, methanol, 0.1N HCl, 0.1N NaOH and Phosphate buffer (pH7.4). Due to greater solubility and reproducible readings of maximum absorbance in 0.1N HCL, it was selected for further study. By serial dilution of standard stock of DPH (100μg/ml), the different dilutions of standard drug with concentration 10, 20, 30, 40, 50, 60, 70, 80, 90, 100μg/ml were prepared and calibration curve was prepared by plotting graph between absorbance and concentration (μg/ml) (Fig. 2). The results of linearity are presented in table 1. The data was statistically validated by means of least square regression method. Calibration curve data were constructed in the range of the concentrations of 10µg/ml to 100µg/ml. Beer’s law was obeyed over this concentration range. The regression equation was found to be Y =0.0016x +0.016. The correlation coefficient (r2) of the standard curve was found to be 0.9934. The stock solutions and working standards were made in 0.1N HCL. Calibration curve as presented in Fig. 2. 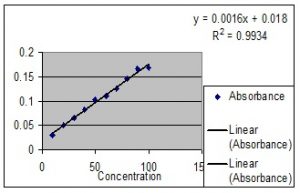 The analytical and necessary validation parameters for the UV spectrophotometric determination of DPH from soft gelatin capsule are presented in Table 1.

In order to assess the accuracy, standard addition method was employed. For evaluating precision, the selected concentration (60 and 70µg/ml) were prepared in 0.1N HCL and analyzed to determine the intra-day and inter day variability. The intra-day and inter day precision were determined and presented as the RSD %. The precision and accuracy of the analysis are given in Table 2, which demonstrate a good precision and accuracy. The proposed methods can be applied for quantitative assay of Diphenhydramine Hydrochloride in soft gelatin capsule dosage without any interference. The method was applied on commercially available brand of DPH and results showed the drug content of this product was in accordance with the labeled claim 25mg.

The recovery of the Diphenhydramine Hydrochloride from several pre- analyzed samples was found to be 98.97% indicating accuracy of proposed method. The good accuracy and higher precision of the proposed method for the determination of Diphenhydramine Hydrochloride from capsule formulation suggested good applicability of this method in routine analysis. The stability of DPH in 0.1N HCL solution at different temperature was evaluated to find whether any degradation occurs. For this, 50μg/mL concentration sample was treated as stated in experimental section. The sample was stable upto 60min for 500C but at 600C and onwards, DPH showed non reproducible absorbance indicating its unstability at 500C (Table 3).

CONCLUSION: The developed UV spectrophotometric method is simple, précised, accurate and reproducible for the estimation of DPH in soft gelatin capsule formulation. Limit of detection was found to be 3.130 and the Limit of quantification to be 9.401. The calibration curves showed linearity between the absorbance and concentration (10-100µg/ml) and correlation coefficient was found to be 0.9934. The percentage recovery was found to be 98.97±0.2989and the sample solution was stable for up to 60minutes at 400C. The proposed method will be suitable for the analysis of DPH in Soft gelatin capsule pharmaceutical formulation.