ABSTRACT: Objective: In the present work, A Simple, rapid, sensitive, precise, and reproducible, specific UV spectrophotometric method for the determination of Saxagliptin (SAXA) and Dapagliflozin (DAPI) in bulk drug and pharmaceutical dosage form were developed and validated. Methods: A simple double beam UV spectrophotometric method has been developed and validated with different parameters such as linearity, precision, repeatability, the limit of detection (LOD), Limit of Quantification (LOQ), accuracy as per ICH guidelines. Results: UV-visible spectrophotometric method, measurement of absorption at a maximum wavelength in 10 ml methanol and volume make with water solvent system as reference SAXA and DAPI were found to be at 224 nm and 274 nm respectively. The drug obeyed the Beer’s law and showed a good correlation. Beer’s law was obeyed in the concentration range 2-10 µg/ml for Saxagliptin and 4-20 µg/ml for Dapagliflozin, respectively with a correlation coefficient was 0.999. The LOD and LOQ of Saxagliptin were found to be 0.040 μg/ml and 0.01230 μg/ml, Dapagliflozin was found to be 0.1230 μg/ml and 0.5460 μg/ml, respectively. Percentage assay of SAXA and DAPI in tablets. Conclusion: The proposed method is simple, precise, accurate, and reproducible can be used for routine analysis of Saxagliptin and Dapagliflozin in bulk and tablet dosage form.

INTRODUCTION: Type 2 diabetes mellitus (T2DM) is a chronic progressive metabolic disorder characterized by absolute or relative insulin deficiency 1. The expected rise in the prevalence of diabetes is mainly due to increased life span because of better healthcare facilities and an increase in risk factors, especially physical inactivity and obesity due to a sedentary lifestyle.

It has a molecular formula of C24H33ClO8 with a molecular weight of 408.98 g/mol 3. Dapagliflozin is selective Sodium-Glucose Co Transporter 2 inhibitor (SGLT 2). It acts by reducing the reabsorption of glucose by the kidney, leading to excretion of excess glucose in the urine, thereby improving glycemic control in patients with type 2 diabetes mellitus 4. Saxagliptin Fig. 2 is chemically known as (1S, 3 S, 5S) - 2 [(2S) - 2 - amino - 2- (3 - hydroxy- 1- adamantyl) acetyl] - 2 azabicyclo hexane-3-carbonitrile) with molecular formula of C18H25N3O2 and molecular weight of 315.41 g/mol 5. Saxagliptin is a selective and potent dipeptidyl peptidase (DPP)-4 inhibitor, approved as an adjunct to diet and exercise to improve glycemic control in type 2 diabetes mellitus (T2DM).  In patients  with T2DM,  once-daily  administration  of Saxagliptin before  breakfast  achieves  sustained inhibition  of plasma DPP-4 activity and reduction of postprandial hyperglycaemia, including after dinner, associated with an increase in plasma glucagon-like  peptide-1  levels 6, 8. A combination of Dapagliflozin and Saxagliptin is marketed as a Tablet (Qtern) containing 10 mg of Dapagliflozin, 5 mg of Saxagliptin. A combination of these two drugs is indicated for the treatment of type-2 Diabetes. Using Dapagliflozin leads to heavy glycosuria (glucose excretion in the urine), which can lead to weight loss and tiredness.

Literature survey revealed a variety of analytical methods viz. HPLC, LC-MS, and GC has been reported for estimation of Dapagliflozin and Saxagliptin individually or in combination with other drugs. The reported methods are Spectrohotometric 9-15, HPLC 16-37, LC-MS 38, 39, and GC 40 methods are reported for the simultaneous estimation of DAPI and SAXA in combined pharmaceutical formulation.

UV Spectro-photometric methods have been reported for determination of SAXA and DAPI in single or in combination with other drugs 41, 42. There is no evidence of the determination of the drug combination by UV Spectrophotometry. Thus, the present study is to develop simple, precise, and accurate UV Spectrophotometric methods for the quantification of Dapagliflozin and Saxagliptin in the combined dosage form.

Saxagliptin Standard Stock Solution: (Stock I) An accurately weighed quantity, 10 mg of Saxagliptin was dissolved in methanol in a  10ml volumetric flask and volume made up to 10.0 ml to produce a solution of 1000 µg/ml Fig. 3.

Dapagliflozin Standard Stock Solution: (Stock II) An accurately weighed quantity, 20 mg of Dapagliflozin  was dissolved in methanol in 10 ml volumetric flask and volume made up to 10.0 ml to produce a solution of 2000 µg/ml. Fig. 4.

Preparation of Stock Standard Combination Solution: (Stock III) [SAXA + DAPI] Accurately weight and transfer 10 mg Saxagliptin and Dapagliflozin   20 mg working standard into 10 ml volumetric flask as about diluent methanol completely and make volume up to the mark with the same solvent to get 1000 & 2000 µg/ml standard  (stock solution)  and 15 min sonicates to dissolve it and remove the unwanted gas, further an aliquots portion of Saxagliptin and Dapagliflozin stock solution in ratio of 1:2 were mixed in a volumetric flask in 10 ml and volume was adjusted up to mark with mobile phase from the resulting solution 0.1 ml was transferred to 10 ml volumetric flask and the volume was made up to the mark with MeOH: Water (0.1% OPA), prepared in (40 ml MeOH: 60 ml  Water (0.1% OPA) solvent. Result as shown as respectively; Fig. 5. 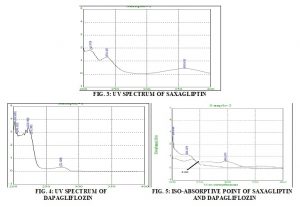 Assay Preparation for Marketed Formulation: For analysis of the tablet dosage form, 20 tablets were weighed individually, and their average weight was determined. After that, they were crushed to fine powders and powder equivalent to 0.70 mg Saxagliptin and Dapagliflozin into 10 ml volumetric flask and diluted with 10 ml methanol and sonicate to dissolve it completely and make volume up to the mark with diluent. The solutions were shaken vigorously for 10 min and filtered through 0.45 µm filters. Further, pipette 0.1ml of the above stock solution into a 10 ml volumetric flask and dilute up to the mark with diluents (10 µg/ml). The simple chromatogram of test Saxagliptin and Dapagliflozin showed in Fig. 6. The amounts of SAXA and DAPI per tablet were calculated by extrapolating the value of area from the calibration curve. The analysis procedure was repeated five times with tablet formulation Analysis of marketed formulation was also % label claim was found to be 99-101% satisfactory were concluded Table 1. 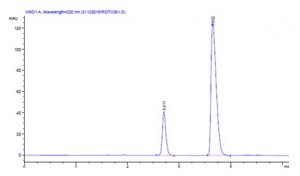 Method Validation: 43-47 The proposed methods were validated in accordance to ICHQ2 (R1) guidelines for linearity, precision, accuracy, the limit of detection,  limit of quantification.

Linearity and Range: The mobile phase was allowed to equilibrate with the stationary phase until OPA by baseline was obtained. From the freshly prepared standard stock solution, pipette out 10 mg Saxagliptin and 20 mg Dapagliflozin in 10 ml of volumetric flask and diluted with the mobile phase. From it 0.1, 0.2, 0.3, 0.4, and  0.5 of solution were pipette out in 10 ml volumetric flask and volume were made up to 10 ml with mobile phase to get final concentration 10, 20, 30, 40, and 50 µg/ml of Saxagliptin and 20, 40, 60, 80, and 100  µg/ml of Dapagliflozin Table 3 and 4.

TABLE 5:  RESULT OF RECOVERY DATA FOR SAXA AND DAPI

Mean of each 3 reading for UV method

System Suitability Parameters: Repeatability studies on UV method for Saxagliptin and Dapagliflozin was found to be, the % RSD was less than 2%, which shows a high percentage amount found in between 98% to 101% indicates the analytical method that concluded Table 7.

Precision: Precision was studied to find out intra and inter-day variations in the test method of Saxagliptin and Dapagliflozin. Intra‐day precision was determined by analyzing three concentrations in three replicate measurements of within the linearity range of drugs on three different times in the same day.

Inter‐day precision was conducted during routine operation of the system over a period of  3 consecutive days.  Intraday and Inter day Precision studies on UV method for Saxagliptin and Dapagliflozin, which shows the high precision % amount in between 98% to 101% indicates to analytical method that concluded  Table 8.

TABLE 8: INTRADAY AND INTER DAY PRECISION FOR SAXA AND DAPI

*Mean of each 3 reading for UV method

DISCUSSION: The proposed methods for simultaneous estimation of SAXA and DAPI in tablet dosage forms were found to be simple, accurate, economical, and rapid. The method was validated as per the ICH Q2 (R1) guidelines. Standard calibration yielded a correlation coefficient (r2) of 0.999 for both Saxagliptin and Dapagliflozin at all the selected wavelengths. The values of % RSD are within the prescribed limit of 2%, showing high precision of methods, and recovery was close to 100% for both drugs. Results of the analysis of pharmaceutical formulations reveal that the proposed method is suitable for their simultaneous determination with virtual inter-ference of any additive present in pharmaceutical formulations. Hence, the above methods can be applied successfully for simultaneous estimation of Saxagliptin and Dapagliflozin in formulations.

CONCLUSION: The developed UV spectro-photometric method in that linearity, precision, range, and robustness were found to be more accurate, precise, and reproducible. The methods were found to be simple and time-saving. All proposed methods could be applied for routine analysis in quality control laboratories.

ACKNOWLEDGEMENT: The authors are thankful to the Principal, Gangamai College of Pharmacy, Nagaon, and Dist. Dhule for providing necessary facilities for research work. They are also grateful to R. S. I. T. C Jalgaon for giving gift samples of pure drugs.

CONFLICTS OF INTEREST: Authors have no conflicts of interest to declare.