A simple, economic, sensitive, precise and accurate UV spectrophotometric method was developed and validated for quantification of Metformin hydrochloride in bulk and in tablet dosage form. Adequate drug solubility and maximum assay sensitivity was found in 0.01N sodium hydroxide at 233nm. Calibration graph constructed at 233nm was linear in concentration range of 1-25μg/ml with correlation coefficient of 0.9998. The method was validated as per ICH guidelines in terms of linearity (within 1-25µg/ml), accuracy (% recovery), precision (inter-day and intraday), specificity and robustness. The limit of detection (LOD) and limit of quantification (LOQ) were found to be 0.2226µg/ml and 0.6745µg/ml respectively. Therefore, the proposed method is suitable  and  can  be  adopted  for  the  determination  of  Metformin hydrochloride  from pharmaceutical dosage form in routine quality control analysis.

INTRODUCTION: Metformin hydrochloride (MET) is a biguanide class of oral antidiabetic drug or blood glucose lowering agent, chemically is N, N-dimethyl imidodicarbonimidic diamide hydrochloride (Figure 1) 1-6. Metformin, itself produces the antidiabetic effect, but its hydrochloride salt is used as the salt form is more soluble in aqueous medium. It is the first line drug for the treatment of type II diabetes or non- insulin dependent diabetes mellitus (NIDDM), particularly in overweight and obese people and those with normal kidney function 7, 8 and evidence suggests it may be the best choice for people with heart failure 9. It is also used in the treatment of polycystic ovary syndrome. Its therapeutic effect is achieved without raising insulin concentrations, and it appears to reduce insulin resistance. Unlike the other major blood glucose lowering agents, namely suphonylurea and insulin, MET does not cause weight gain.

Indeed, MET may produce a small decrease in body weight during the initial months of treatment. This cannot be attributed to a chronic decrease in food consumption or increased physical activity, suggesting that the drug increases metabolic energy expenditure. The drug is found official in Merck index 10. There are various spectrophotometric methods developed for estimation of MET 11-13. Solvents used for the methods are comparatively of high cost. There is a need for a simple, rapid, cost effective and reproducible method for assay of MET in pharmaceutical dosage forms.

Therefore, it was thought of interest to develop simple, accurate, fast and cost effective method for the analysis of MET in its tablet formulation. This paper describes development and validation of simple, specific, sensitive, accurate and precise Ultraviolet spectroscopic method for the estimation of MET in bulk and its formulation.

Preparation of Standard Solutions: Stock solution of MET was prepared by dissolving 10 mg drug in 100 ml 0.01N NaOH. Several aliquots of standard solutions of MET (100µg/ml) were diluted to get standard solutions across the range of 1-25µg/ml.

Preparation of Sample Solutions: Average weight of MET tablets of each brand was calculated. Then the tablets were grinded to fine powder with the help of mortar and pestle. Then, powder containing 10 mg MET was dissolved in 0.01 N NaOH, shaken for about 10 minutes and filtered through filter paper. The filtered solution was further diluted to make the final concentration of working sample equivalent to 100% of target concentration (10µg/ml).

Determination of λmax: Standard solution containing 10µg/ml of MET was scanned using 0.01N NaOH as blank in the range of 200-400 nm to determine the wavelength of maximum absorption (λmax) of the drugs. MET showed absorbance maxima at 233 nm.

Development of Equation for Assay: 10 ml of the stock solution was diluted to 100 ml with 0.01N NaOH to obtain a 10 µg/ml MET reference standard solution. The absorbance of the sample solutions and the reference standard solution was measured at 233 nm using 0.01N NaOH as blank. The amount of MET per tablet and respective potency (%) in the marketed brands were determined using the following equations-

Amount of MET (mg) per tablet,

Method Validation: Present study was conducted to obtain a new, affordable, cost-effective and convenient method for spectroscopic determination of MET in solid dosage form. The method was validated for the parameters like linearity, accuracy, precision and robustness as per ICH guidelines 14.

Specificity: Specificity of the method was determined by comparing the spectrum of standard MET with that of market product.

Linearity Study: The linearity of an analytical method is its ability to elicit that test results are proportional to the concentration of analyte in samples within a given range. This was determined by means of calibration graph using increasing amounts of standard solutions (1-25µg/ml). Calibration curves were constructed and the proposed method was evaluated by its correlation coefficient and intercept value calculated in the corresponding statistical study. Characteristic parameters for regression equation of the method were obtained by least squares treatment and of the results and these parameters were used to confirm the good linearity of the method.

Intraday and Inter-day Precision Study: Intraday precision (reproducibility) was determined by performing three repeated analysis of the five standard MET solutions (1, 2, 10, 20, 25µg/ml) on the same day, under the same experimental conditions. Inter-day precision (ruggedness) of the method was assessed by carrying out the analysis of standard solutions on three different days in the same laboratory. Measurement of absorbance was in triplicate manner and the mean, standard deviation and relative standard deviation (% RSD) was determined in order to assess the precision of the method.

Accuracy Study: This study was carried out using preformulated placebo granules prepared according to a common formulation. 8 mg, 9 mg, 10 mg, 11 mg, and 12 mg pure MET powder were then transferred respectively in to five 100 ml volumetric flasks and fixed amount of placebo granules were added to each of the volumetric flasks. These were then dissolved and then diluted up to 100 ml with 0.01N NaOH. Same dilution pattern as sample solution was followed to obtain five concentrations, 80%, 90%, 100%, 110%, and 120% of sample solution respectively. The solutions were then analyzed for the content of MET using the proposed method with reference solution (10μg/ml of pure Metformin hydrochloride). All analyses were carried out in triplet.

Robustness Study: The robustness of the method was assessed by altering the solvent composition of the experiment.

Where So and b are the standard deviation and the slope of the calibration line respectively.

Analysis of Marketed Products: This was carried out using the developed and validated method.

Statistical Analysis: Where applicable, results were expressed as mean ± SD and analyzed statistically.

Specificity: UV spectroscopic method for MET analysis was found specific as spectrum of standard MET coincide with that of market product indicating that excipients has no noticeable effect on the effectiveness of the method.

Linearity: Linearity of the method was evaluated from the correlation coefficient of calibration curves that were constructed from average absorbance of drugs at different concentration level (1-25µg/ml). The linearity parameter (Table 1 and Figure 2) and the corresponding regression data indicated excellent linear relationship (R2= 0.9998) over the working concentration range (1-25 μg/ ml). Table 2 shows statistical data of the calibration curve. 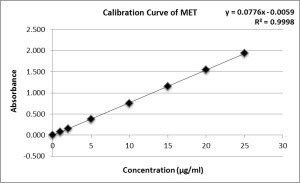 Intraday and Inter-day Precision: Intra-day precision and accuracy of the proposed method were evaluated by replicate analysis (n= 3) of calibration standards at five concentration levels (1, 2, 10, 20, 25 µg/ml). Inter-day precision and accuracy were determined by assaying the calibration standards at five concentration levels (1, 2, 10, 20, 25µg/ml) on three consecutive days. % RSD was calculated for various runs. The method is highly precise as % RSD for Intraday and Inter-day Precision study was less than 2% (table 3 & 4).

Accuracy: Accuracy is generally assessed by analyzing samples with known concentration and comparing the measured value with the true value. The measured values were obtained by recovery test. % recovery was found satisfactory for MET with % RSD values below 2.0%. All the results indicate that the method is highly accurate (table 5).

Robustness: Robustness study was performed by making slight variations in solvent composition. No significant effect was observed in the recovery of drugs. % recovery was 98% to 102%. So we can say that the method is robust.

Low limit of quantification and limit of detection makes this method suitable for use in quality-control testing.

Extinction Coefficient of MET: In addition, the reliability of the proposed method was also evaluated by means of the determination of the extinction co-efficient of MET using Beer-Lambert’s Law. Average value was found 12579.1 M-¹cm-¹ with standard deviation of 245.294 M-¹cm-¹, RSD was 1.95%.

Analysis of Marketed Products: After the validation of the UV Spectrophotometric method, the potency test of four marketed tablet products were performed by the proposed validated method.

Among the different marketed brands supplied, the potency of all the brands was found to be within the limit of 98.597-101.790%.

CONCLUSION: The validation study shows that the developed UV method is linear, accurate, rapid, precise, robust and inexpensive with acceptable correlation co-efficient, RSD (%) and standard deviations which make it versatile and valuable for determination of Metformin hydrochloride in bulk or pharmaceutical dosage forms. The advantages lie in the simplicity of sample preparation and the low costs of reagents used. The proposed method is simple and do not involve laborious time-consuming sample preparation. So this method can be used in the quality control department for potency and dissolution study.

ACKNOWLEDGEMENTS: The authors are thankful to Beximco Pharmaceuticals Ltd for providing the API as gift.