ABSTRACT: The present investigation deals with the development of duloxetine ethosome then loading into the transdermal patch to impart lower drug side effect, enhanced bioavailability, avoiding first-pass metabolism. 32 factorial design was applied to optimize the formulation. Ethanol (X1) and Phospholipid (X2) were taken as independent variable, Responses are vesicle size (Y2), entrapment efficiency (Y1). Optimum desirability was identified and, an optimized formulation was prepared, characterized and loaded into transdermal patch. The transdermal patch was evaluated for drug content, thickness, folding endurance. Ex-vivo permeation study for the prepared patch was conducted and, the permeation parameters and drug permeation mechanism were identified. The percent of alcohol was significantly affecting all the studied responses while the other factors and their interaction effects were varied in their effects on each response. The optimized ethosomes formulation showed observed values for Y2, Y1 of 161 nm and 98.79% respectively. Ex-vivo permeation of films loaded with optimized ethosomal formulation was superior to that of the corresponding pure drug transdermal Patches.

INTRODUCTION: Flexible vesicular carriers are one of the approaches to enhance skin permeability of essential drugs, through the stratum corneum barrier. Liposomes, transfersomes, and ethosomes are three common types of these flexible particles although niosomes, non-ionic surfactant based vesicles, possess similar properties and uses 1. Conventional liposomes are the least among them in their transdermal application since they are confined to the upper layer of the skin stratum corneum and therefore, are topical delivery. Ethosomes are lipid-based vesicular particles containing ethanol in a relatively high concentration and water.

These particles have been emerged due to the unique characteristic features and advantages they possess. High deformability, high drug entrapment efficiency, and enhanced transdermal permeation rate in the drug- delivery system make them suitable for transdermal administration of different therapeutic agents 2. Deeper penetration and enhanced permeation to the skin layers have been reported to be attributed to the presence of phospholipid and high concentration of ethanol. Ethosomes have shown extensively higher drug transdermal flux in comparison to liposomes and 24-fold higher in-vitro skin permeation when compared with aqueous drug solution 3, 4.

Duloxetine inhibits the reuptake of serotonin and norepinephrine (NE) in the central nervous system. The analgesic properties of duloxetine in the treatment of diabetic neuropathy and central pain syndromes such as fibromyalgia are believed to be due to sodium ion channel blockade.

The aim of this study was to develop duloxetine transdermal films loaded with an optimized drug ethosomes formulation to enhance the skin drug permeability, decrease dosing frequency, extend the drug release, and avoid drug per-oral side effects. 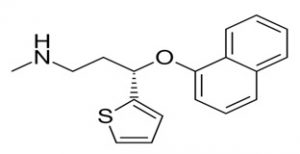 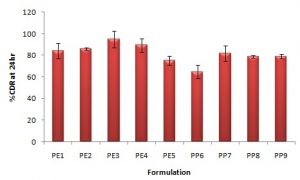 Drug–Excipient Compatibility Study: Drug-excipient compatibility was carried out by FTIR spectroscopy. Individual sample of PC-90G, RXL, physical mixture of PC-90G and RXL and the final optimized formulation of ethosomes in a freeze-dried form were scanned for spectral observations. A total no. of sixteen scans within a scanning range of 400 cm-1 to 4000 cm-1 was performed shown in Fig. 4. 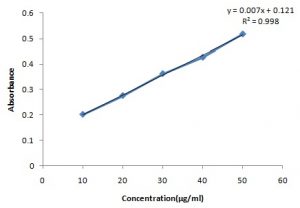 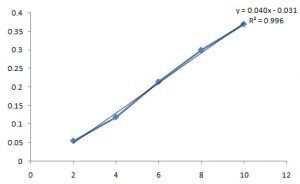 FIG. 4: STANDARD CURVE OF DULOXETINE IN ETHANOL AT 292 nm

32 Full Factorial Design: Based on our preliminary investigation and information from the literature two independent formulation parameter are selected A 32 factorial design was applied 10. According to this design, 9 runs were conducted in total the independent variables selected for this study were X1, Ethanol; X2, Phospholipid.

Preparation of the Formulations: Table 2 illustrates the composition of the Duloxetine ethosomal formulations proposed by the 32 full factorial design. Preparation of the formulations was achieved according to the method previously published except for slight modification 5. Briefly, the calculated amount of cholesterol, phospholipids (X2), and drug (1%) were dissolved in a mixture of the specified amount of ethanol (X1) and propylene glycol in a covered glass bottle vessel at room temperature by vigorous stirring. The mixture was heated to 30 ºC in the water bath. Distilled water, quantity sufficient to prepare 10 ml formulation, was added slowly at a constant rate of 1 ml/min in a fine stream with a constant mixing using a magnetic stirrer at 1500 rpm in a closed vessel. The temperature was maintained at 30 ºC during the experiment. Mixing was continued for additional 5 min while the temperature was kept at 30 ºC. The preparation was stored at 4 ºC. Ethosome prepared by the above procedure were subjected to sonication at 4 ºC using probe sonication in 3 cycles of 5 min each with 5 min rest between each cycle.

Characterization of the Formulations:

Vesicle Size and Zeta Potential. Dynamic light scattering technique was utilized to measure the particle size and zeta potential of the prepared vesicles using Zetatrac (Microtrac Inc., York, PA). An aliquot from each formulation was taken, loaded into the sample chamber and measured. Measurement was done in triplicate for each formulation.

Entrapment  Efficiency: An aliquots from each formulation were placed in Eppendorf tubes (n = 3) and subjected to centrifugation at 16000 rpm for 30 min at 4 ºC using (Sigma Laboratory centrifuge, 3K30, Ostrode, Germany). The supernatant was separated, filtered and the amount of free drug was determined using UV method at 292 nm.

For TEM, few drops of the prepared formulation were mounted on a carbon-coated grid, left for about 3 min to permit better adsorption of the vesicles on the carbon film, then a filter paper was used to remove the excess liquid. A drop of phosphotungstic acid of 1% concentration was added and the sample was examined under TEM (Model JEM-1230, JOEL, Tokyo, Japan).

The optimized ethosomal drug formulation was also examined under an optical microscope (Olympus System Microscope Model CX41, Tokyo, Japan). Images were taken under 100 and 400_ magnification power to illustrate the structure of the prepared vesicles.

Preparation of Duloxetine Ethosomal based Transdermal Films: In order to prepare a medicated transdermal films, known weight of HPMC was added to a specified volume of the optimized drug ethosomal formulation to prepare 1% polymeric solution. DMSO and propylene glycol, in a concentration of 2% each, were added as a skin permeation enhancer and plasticizer, respectively. The dispersion was thoroughly mixed on a magnetic stirrer at 1000 rpm then was left for 24 h in the refrigerator at 5 ºC in order to obtain a clear solution. The prepared medicated polymeric solution was poured into a glass petri dish covered with a silicone-coated liner (ScotchpakTM, 3M, St Paul, USA) and kept in an oven at 40 ºC until complete evaporation of the solvent.

The dried semi-solid formulation was cut into films of 1.76 cm2. The prepared films were finally stored in a tightly closed container maintained at room temperature. For comparative study, pure drug films, containing pure duloxetine instead of the drug ethosomal formulation, were prepared using the same concentrations of DMSO and propylene glycol in 1% HPMC solution using distilled water as a solvent utilizing the same procedure 5.

In-vitro Release Studies: Transdermal patches can be in-vitro evaluated by Franz diffusion cell the cell using synthetic membrane. The Franz diffusion cell composed of two compartments: donor and receptor. The receptor compartment has a volume of 5-12 ml and an effective surface area of 1-5 cm2. The diffusion buffer is continuously stirred at 600 rpm by a magnetic bar. At appropriate intervals (1, 2, 3, 4, 5, 6, 7, 8, 12, 14, 24 h), 1 ml of sample was withdrawn from receptor medium and immediately equal volume of fresh receptor solution was added to maintain sink condition of receptor medium. The temperature in the bulk of the solution is maintained by circulating thermos stated water through a water jacket that surrounds the receptor compartment. The drug content is analyzed using suitable UV method, at 282 nm6.

Ex-vivo Permeability Study: Franz diffusion cell was used for skin permeation study with an effective diffusion area of 2.668 cm2. The experiment was carried out using freshly killed goat dorsal skin acquired from the local slaughterhouse and stored at 18 °C in the ringer solution. The skin was first flushed with ringer solution at room temperature for 2 h with aeration. Then further fat content was removed from subcutaneous tissue of skin by using hand razor. The moisten skin was further wiped with distilled water. A circular piece of skin (about 3.2 cm diameters) was sandwiched between donor and receptor compartment of the vertical diffusion chamber and 30 mg drug-loaded Transdermal patch was added to the mucosal side.

The receptor compartment was filled with phosphate buffer pH 7.4, kept at constant temperature of 37 ± 5 ºC and stirred using magnetic stirrer. At appropriate intervals (1, 2, 3, 4, 5, 6, 7, 8 to 12 h), 1 ml of sample was withdrawn from receptor medium and immediately equal volume of fresh receptor solution was added to maintain sink condition of receptor medium. Periodically samples were collected and analyzed by UV spectrophotometer (Shimadzu-1800, Japan) at 282 nm using phosphate buffer (pH 6.8) as blank. Each experiment was performed in triplicate. The cumulative amount of duloxetine permeated per unit area from the transdermal system through the skin into the receptor compartment medium was plotted as a function of time, and the slope of the linear portion of the plot was estimated as steady-state flux 7, 8, 9.

RESULTS AND DISCUSSION: The concept behind the improved transdermal flux of ethosomes relies on the concentration of ethanol and its penetration enhancing ability by disrupting the stratum corneum.

Effect on the Vesicle Size: From the results of the statistical analysis illustrated in Table 3, it was concluded that; the main effect of X1 and X2, the interaction effect of X1X2, and the quadratic effect of (X1) were significantly affecting the vesicle size (Y1) of the prepared ethosomal formulations. All of which showed a positive, synergistic, effect on vesicle size, size ranging from 161 nm to 1062 nm shown in Fig. 5.

TABLE 4: COMPOSITION OF THE DULOXETINE ETHOSOMAL FORMULATIONS AND OBSERVED VALUES OF THE STUDIED RESPONSES 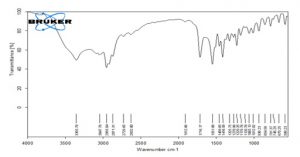 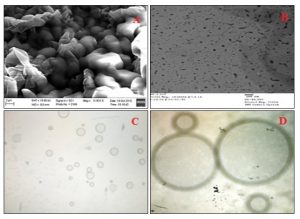 Entrapment Efficiency: It was noticed that the main effect of X1 and X2, and the interaction effect of X1X2 were significantly affecting the entrapment efficiency of the prepared drug ethosomal formulations. All these variables had a synergistic, positive, effect on EE%, it ranges from 98.79% to 94.55% Fig. 9. 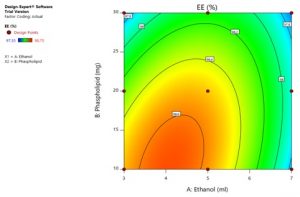 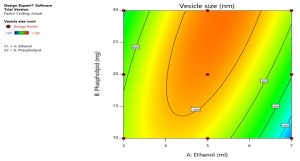 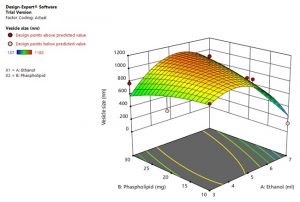 Ex-vivo Permeation Studies through Goat Abdominal Skin: The results of ex vivo drug permeation studies of ethosomal formulations (PE1, PE2, PE3, PE4, PE5) were compared with patches containing the only pure drug. The results indicated that drug penetration was increased with ethosome incorporation and the percent drug permeated from PE3 was found to be up to 86.34% and in PP8 it was found to be 22.14%.

Finally, this drug delivery system could avoid the hepatic first-pass metabolism and considered an alternative administration route for acid-sensitive drugs

ACKNOWLEDGEMENT: The authors wish to express their heartfelt gratitude to Dr. V. Prahakar Reddy Principal of Palamuru University, Mahabubnagar, and Telangana for providing their unrestricted support for carrying out this research.

CONFLICTS OF INTEREST: The authors declare there are no conflicts of interests regarding this study.