ABSTRACT: A very simple and selective U. V. Method was developed and validated for the estimation of Atovaquone in pure form and the nanosuspension. The adequate drug solubility and maximum assay sensitivity was found in 8.00 Ph IPA Phosphate Buffer in 40:60 ratios v/v. The absorbances were measured at the λmax. of 494 nm in the wavelength range of 200-800 nm. The linear calibration range was found to be 20-140 µg/ml. The same method was applied and validated for the determination of Atovaquone in nanosuspensions. Also no interference was found from the excipients added to the nanosuspensions at the selected wavelength of 494 nm and at the analysis condition .It was found that the developed method was accurate, sensitive, precise, robust and reproducible. It can be applied directly for the estimation of drug containing the pharmaceutical formulations.

INTRODUCTION: Atovaquone, a hydroxy-1, 4 Napthoquinone (Fig. 1) is a structural analogue of protozoan ubiquinone, a mitochondrial protein involved in electron transport 1. The drug has been approved in USA, Canada and in European countries for the treatment of Pneumoncystis carinii in Acquired Immunodeficiency Syndrome (AIDS) in patients that are intolerant to trimethoprim/Sulphamethoxazole. This drug was also found to be effective against toxoplasmosis another common opportunistic infection in patients with AIDS.

Its mechanism of action has been most completely elucidated for Plasmodium spp. The drug is structurally similar to the inner mitochondrial protein ubiquinone (also called ubiquinone) which is an integral component of electron flow in aerobic respiration. Ubiquinone accepts electron from dehydogenase enzyme and passes them to electron transport cytochromes. The passage of electrons from ubiquinone to cytochrome bc1 Complex III requires binding of coenzyme Q Complex III at the Q0 Cytochrome domain, it is this step which is inhibited by Atovaquone.

Several parasite enzymes are linked to the mitochrondrial electron transport system and are inhibited. Included among these enzymes is dihydro rotate dehydrogenase (DHOD) which is required in the biosynthesis of pyrimidines because plasmodia are unable to scavenge pyrimidines for DNA synthesis, inhibition of DHOD results in paralytic death. ATP generation is another physiologic process linked to decrease by the administration of Atovaquone. The effect of Atovaquone on Malarial parasites occurs at nanomolar concentrations 3.

Various method have been developed for the estimation of the Atovaquone by RP-HPLC using filtered and degassed mixture of Buffer and Acetonitrile in the ratio of 20:80 v/v.4 A simple, fast, precise and rapid isocratic reverse phase high performance liquid chromatographic method was developed for the simultaneous determination of Atovaquone and proguanil hydrochloride from tablet dosage form 5. A U.V. method was developed for the determination of Atovaquone in Pharmaceutical Dosage form in Methanol at 251 nm 6. The current study reveals a very simple precise and accurate method for the estimation of the Atovaquone in Pharmaceutical Dosage forms. 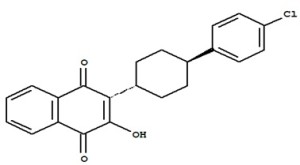 Instrumentation: Varian Cary C50 was used for the Spectrophotometric observations with spectral bandwidth of 1 nm with wavelength accuracy of ± 0.3 & 1.0 cm matched Quartz cells were used for the analytical method development.

Standard Preparation:  Standard stock solution was prepared by weighing about 10 mg ofAtovaquoneand transferred to 100 ml clean, dry standard volumetric flask. The volume was made up with the above prepared IPA Phosphate Buffer (40:60 v/v). Pipette out 2, 4, 6, 8, 1, 1.2 and 1.4 of the above stock solutions and was transfer to 10 ml volumetric flask to obtain 20, 40, 60, 80, 100, 120 and 140 ml concentration respectively. The linearity graph was plotted with concentration on X axis and absorbance on Y axis after scanning the solution.

Preparation of Sample solution: Mepron® Suspension (claiming 750 mg of Atovaquone in 5 ml) was taken.1.4 ml of the above suspension was added to 100 ml of volumetric flask and make up the volume with IPA Phosphate Buffer to obtain 100 μg/ml solution. The solution was filtered using 0.45µm pore filter and further measurements were done using U.V.

Selection of Wavelength: The 100µg/ml stock solution prepared above was scanned in the range of 200-800 nm. The absorbance maximum of 494nm (Fig. 2) was selected for analysis of Atovaquone. 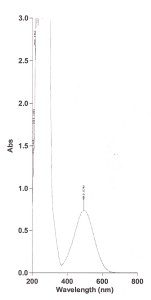 Calibration Curve: Absorbance’s of above prepared dilutions was reported at 494 nm against IPA Phosphate Buffer as blank .The readings were taken in triplicates (Table 1).

The graph was plotted by taking concentration on X axis and absorbance on Y axis. The coefficient of regression (r2) of 0.998 (Graph 1) for Atovaquone drug was obtained. 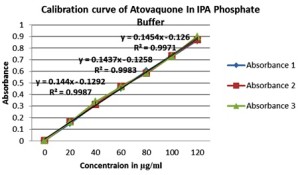 Method of Validation: Validation is a process of establishing documented evidence which provides a high degree of assurance that a specific activity will consistently produce a desired result or a product meeting its predetermined specifications and quality characteristics 7. The method was validated for different parameters like linearity, accuracy, precision, robustness, and ruggedness, limit of detection (LOD) and limit of quantification (LOQ) 8.

Linearity & Range: Linearity of Calibration Curve (Abs. vs Conc.) in Pure solution were checked over the concentration ranges of about (20-140 µg/ml) for the Atovaquone pure drug. The results were shown in Table 1 and linearity graph were represented by Graph 1.

Accuracy: Accuracy of the method was checked by preparing the solution of different concentrations of 50%.100% and 150% where the concentration of Meprone® suspension was kept constant i.e. 20 mg & pure API was varied as 10mg, 20mg & 30mg respectively. The solutions were prepared in triplicates & the accuracy was indicated by % recovery (Table 2).

TABLE 2: ACCURACY OF THE METHOD WITH % RECOVERY

TABLE 3: PRECISION OF METHOD FOR INTERDAY AND INTRADAY VARIATIONS

Robustness: Robustness of the method was determined by carrying out the analysis at 5 different wavelengths (i.e. 494±1). The absorbances were noted and the results were indicated by %RSD (Table 4).

TABLE 4: ROBUSTNESS OF THE METHOD DEVELOPED

Ruggedness: The Ruggedness of the method was determined by carrying out the analysis by two different analysts and the respective absorbances were noted. The results were determined by %RSD (Table 5).

TABLE 5: RUGGEDNESS OF THE METHOD DEVELOPED

Limit of Detection: The detection limit of individual analytical procedure is the lowest amount of analyte in the sample. The Limit of detection was determined by using the formula involving standard deviation of response and slope of calibration curve.

Where.SD is the standard deviation of y intercept and S is slope of calibration curve.

Limit of Quantification: The LOQ is the concentration that can be quantified reliably with the specified level of accuracy and precision. The LOQ was calculated using the formula involving standard deviation of response and slope of calibration curve.

Where, SD is the standard deviation of Y intercept and S is the slope of calibration Curve

Interaction with placebo: The scan of placebo for the nanosuspensions was taken in 200 to 400 nm range. The scan shows that no interference of the excipients was found in the region of 494 nm at which Atovaquone shows the λmax value. This shows that the method is very accurate for the determination of the Atovaquone in Various pharmaceutical dosage forms (Fig. 3, 4). 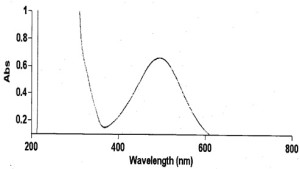 RESULTS AND DISCUSSION: The developed method was found to be precise as the % RSD values for intraday and interday were found to be less than 2 %.Good recoveries (96.9% to 101.4 %) of the drug were obtained at each added concentration, which indicates that the method was accurate. The LOD and LOQ were found to be in sub microgram level (i. e. 0.0495 & 0.06031) which indicates the sensitivity of the method. The method was also found to be robust and rugged as indicated by %RSD values which are less than 2 %.The assay results shows that the amount of drug was in good agreement with the labeled claim of the formulation as indicated by % recovery (101.01 %).

Summary of Validation: Parameters of proposed Spectrophotometric method were shown in table 6.

ACKNOWLEDGEMENTS: I am very much thankful to Dr. K. B. Burade (Principal, Govt. College of Pharmacy Karad), Dr. Shailendra Gurav (Asst. Prof. GCOPK), Yogesh Gavhane (Asst. Prof. GCOPK), Vineet Rhagvan (Associate Director, LRP, Pune), Satish Dalal (Principal Research Scientist, LRP Pune), Harshal Jahangirdar (Sr. Research Scientist LRP, Pune), Ganesh Katkar, Vishal Patil (Research Scientists, LRP, Pune) for guiding and supporting me during my research. My Special thanks to my beloved Dr C. G. Kulkarni (H.O.D. Biotechnology Dept., GCOPK) for being my instructor and my teacher in different phases of my life. Also a great thanks to my colleagues and lupinites. Last but not the least the Google engine and LRP for providing me engine on time during my journey.