The aim of this study was to develop a pH responsive enteric coated extended release pellets containing a model drug flurbiprofen, a non-steroidal anti-inflammatory drug used for rheumatoid arthritis. The drug loaded pellets were prepared by using extrusion/ spheronization method. Core pellets were coated with polymer Eudragit RS30D in a coating pan to achieve a sustainable release for 12 hours. A ph responsive barrier coat of      Eudragit L 100-55 was employed in a coating pan for abstaining release in acidic media.  The drug excipient mixtures were subjected to pre-formulation studies. The pellets were subjected to physicochemical studies, in-vitro drug release, Kinetic studies and stability studies. FTIR studies shown there was no interaction between drug and polymers. The physicochemical properties of pellets were found within the limits. The drug release from the optimized formulations was extended for a period of 12 hrs i.e. first 2 hrs no drug release was observed and gradually drug release was increased up to 12 hrs. From the above results, achievement of site specific release to lower part of gastrointestinal tract might be due to Eudragit L 100-55 stability in acidic pH. The prepared pellets apart from fulfilling all official and other specifications, exhibited good extended release of Flurbiprofen. The optimized formulations were subjected to stability studies and shown there were no significant changes in drug content, physicochemical parameters and release pattern. In conclusion, development of Eudragit RS30D-Eudragit L 100-55 was novel and good approach to achieve the site specific release of drug to colon.

INTRODUCTION: The term arthrities is used to describe changes in the joints which may be either inflammatory or degenerative in character 1, 2.

Circadian variation in pain, stiffenss and manual dexterity in patients with osteo and rheumatoid arthritis have been studied and has implication for timing anti-rheumatoid drug treatment 2. Morning stiffness associated with pain at the time of awakening is a diagnostic criterion of the rheumatoid arthritis and these clinical circadian symptoms are supposed to be outcome of altered functioning of hypothalamic–pituitary adrenocortical axis. Chronopharmacotherapy for rheumatoid arthritis has been recommended to ensure that the highest blood levels of the drug coincide with peak pain and stiffness 3. A sustained drug delivery system that can be administered at night (before sleep) but that release drug in early morning would be a promising chronopharmaceutic system 4, 5.

Drug targeting to colon would prove useful where intentional delayed drug absorption is desired from therapeutic point of view in the treatment of disease that have peak symptoms in the early morning such as nocturnal asthma, angina, arthritis 6, 7, 8, 9.

Some orally administered drugs (e.g. Diclofenac, Theophyllin) may exhibit poor uptake in the upper regions of GIT or degrade in the presence of GIT enzymes. Better bioavailability can be achieved through colonspecific drug delivery. Colonic targeting is also advantageous where delay in systemic absorption is therapeutically desirable 6, 9.

Flurbiprofen (see Figure 1) is an important analgesic and non-steroidal anti-inflammatory drug (NSAID) also with anti-pyretic properties whose mechanism of action is the inhibition of prostaglandin synthesis. It is used in the therapy of rheumatoid disorders.

Flurbiprofen is rapidly eliminated from the blood, its plasma elimination half-life is 3-6 hours and in order to maintain therapeutic plasma levels. The drug must be administered approximately 150-200mg daily by oral in divided doses10. Therefore, to improve the biological half-life and to improve patient compliance, an Enteric coated sustained release formulation of Flurbiprofen is desirable.

Drug-excipient compatibility studies 11: Assessment of possible incompatibilities between an active drug substance and different excipients forms an important part of the pre-formulation stage during the development of solid dosage form. Therefore, the pure drug and the formulations mixed with polymers were subjected to infra-red (IR) studies.

The pure drug and formulations mixed with polymers were separately mixed with IR grade potassium bromide in a ratio (1:100) and pellets were prepared by applying 10 metric ton of pressure in hydraulic press. The pellets were then scanned over range of 4000-400cm-1 in FTIR instrument.

Preparation of Flurbiprofen core pellets[12]:Drug containing core pellets were prepared by extruder-spheronizer (NAOMI, Mumbai, India). The flurbiprofen, spheronizing agents Avicel pH 101, lactose (filler), superdisintigrant croscarmellose sodium were mixed to form a uniform blend. The binder solution PVPK-30 (2.5% in 50:50 alcohol/ water) was slowly added in the powder mixture to achieve a consistency of the damp mass suitable for further extrusion-spheronization process. The composition of core pellets is given in Table 1. the prepared mass was immediately passed through a screw type extruder using 1mm diameter screen with the speed set at 15 rpm. The extrudes were then transferred to spheronizer for 15-20 min at a rotation speed of 700 rpm. The resultant pellets were dried at 500C in oven for 30 min.

Coating 12, 13: The coating solution was sprayed on to the core pellets using a spray gun in a coating pan, United technologies, Mumbai (see Figure 3). The conditions for coating were shown as follows: Pellets charged-25 g, Preheating temperature 500C, Preheating time-10min, Outer blower temperature-75oC. The final coating batches with various levels of polymers are shown in Table 4.

Pellets characterization 12:The pellets were characterized for the size, shape using vernier caliper. The diameter of the core pellets, Eudragit coated pellets were measured to assess the parameters like size and shape uniformity.

Micromeritic properties 14:The bulk density and tapped density of drug powder and pellets were evaluated to assess the packing ability due to tapping. The carr’s compressibility index and hausner’s index was computed.

Drug content estimation 14:The Eudragit RS30D and L30D-55 coated pellets equivalent to 100mg of Flurbiprofen were weighed accurately, grinded in motor and dissolved in phosphate buffer, pH 6.8, and was analyzed spectrophotometrically at 247 nm after sufficient dilution with the respective solvent of phosphate buffer solution pH 6.8. All the experiments were performed in triplicate.

In-vitro drug release studies for Enteric Coated Extended Release Pellets 14:Dissolution studies were performed using USP standard dissolution apparatus at 37±0.5oC. The basket was immersed in 900ml of dissolution medium and rotated at 50 rpm. The dissolution Media used was initially 0.1N HCl up to 2hrs, then continuation with fasted buffer having pH 6.8. During the test 5 ml of the sample was withdrawn at specific time intervals 1, 2, 4, 6, 8, 10, 12 hrs after each withdrawal, same volume of fresh dissolution medium was added to maintained sink conditions. Different aliquots were suitably diluted. The absorbance was measured in the UV Spectrophoto-meter at 247 nm.

Stability studies16, 17: For all the pharmaceutical dosage forms it is important to determine the stability of the dosage form. This will include storage at both normal and exaggerated temperature conditions, with the necessary extrapolations to ensure the product will, over its designed shelf life, provide medication for absorption at the same rate as when originally formulated.

The FTIR spectral analysis showed that there is no appearance or disappearance of any characteristic peaks of pure drug flurbiprofen and in the physical mixture which confirms the absence of chemical interaction between drug and polymers. 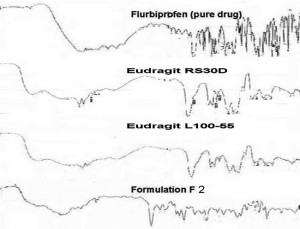 Pellet characterization: It was observed that pellets were of uniform in size and shape. The average size of drug containing core pellets was 1.3-1.7 mm (n=100). The uniform size of pellets indicates good content uniformity, good flow and ease of capsule filling.

Friability: Friability of pellets is an important parameter to withstand handling, shipping, storage and other processing parameters such as coating. The weight loss after friability testing was calculated as 0.637±0.14 showing good friability. 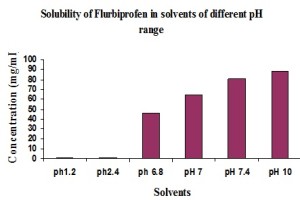 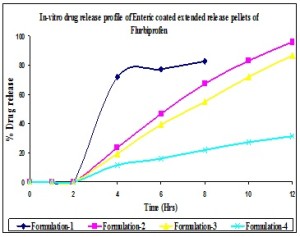 From this, we conclude that as the weight gain of sustained release polymethacrylate polymer Eudragit RS30D increased from 6-15% the release profile of formulations decreased. As our aim was to achieve extended release for 12 hrs, Formulation F2 with 9% Eudragit RS30D and 5% Eudragit L100-55 was considered to be most suitable as it released maximum drug for a period of 12 hrs with a 2 hr lag time in acidic medium. This 2hr lag time might be due to Eudragit L 100-55 stability in acidic pH. Hence, it was considered as the best formulation.

Release Kinetics studies: The kinetic data of the optimized formulation F2 is represented in Figures 5-8. The results revealed that Formulation F2 release the drug by zero-order kinetics. To ascertain the drug release mechanism, the in-vitro release data was also subjected to Higuchis diffusion plots and Peppas plots and the correlation coefficient values was found to be 0.8607 and 0.9340 respectively. So it confirms that, the calculated R2 values for Higuchi plot and Peppas plots were nearer to one (1) suggesting that drug released by diffusion mechanism.

Stability studies: The optimized Formulation 4 was subjected to stability studies and shown there were no significant changes in drug content, physicochemical parameters and release pattern (as shown in Table 7). 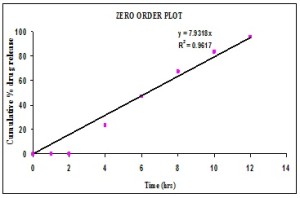 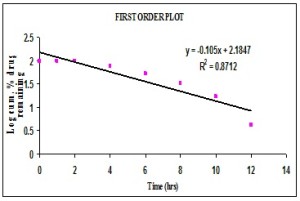 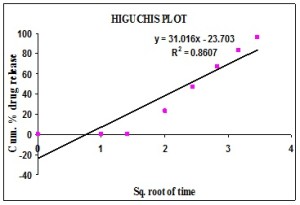 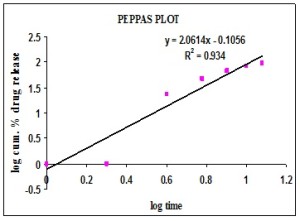 CONCLUSION: An Enteric coated extended release pellets was successfully developed by coating the Flurbiprofen core pellets with Eudragit L100-55 and Eudragit RS30D which produces a 2 hr lag time in acidic medium followed by sustained release phase for 12hrs. The produced coated pellets were stable for a period of 2 months when stored as per ICH guidelines. Therefore, these findings suggest the suitability of these polymers for preparing the above mentioned formulation. Hence, it can be concluded that the enteric coated extended release pellets would be a promising drug delivery system for systemic administration of Flurbiprofen for rheumatoid arthritis.