The aim of this study was to investigate the effect of permeation of drug into skin by taking three different vesicle size niosomal formulations. The combined influence of 3 independent variables in the preparation of venlafaxine niosomes by the Ether Injection Method and it was to derive a second order polynomial equation and construct contour plots to predict responses. Seventeen batches were prepared by the Ether Injection Method and evaluated for vesicle size and polydispersity index. Contour plots were constructed to show the effects of X1, X2 and X3 on the vesicle size and polydispersity index.  Niosome are acceptable and superior carriers and also have ability to encapsulate hydrophilic and lipophilic drugs and protect them from degradation. Niosomes were characterised for entrapment efficiency, vesicle size and Permeation and drug deposition in the rat skin. Stability of niosomes formulation was studied at two different temperature conditions for 30 days. Niosomes dispersion were found to be stable and preparation of niosomes using factorial design was found to be well suited and sound approach to be stable niosomal formulations. The Box-Behnken design demonstrated the role of the derived equation and contour plots in predicating the values of dependent variables for the preparation and optimisation of venlafaxine niosomal formulations.

INTRODUCTION: Venlafaxine is a poor metabolizer, potent serotonin nor-epinephrine reuptake inhibitor drug used for the treatment of depression; it is associated with several side effects such as memory loss, constipation, vivid etc. When taken orally for a prolonged use. One of the major problems in designing the formulations of Novel drug is their limited metabolism. This problem can be overcome by entrapping the drug in a vesicular structure. Encapsulation of drug in vesicular structures like liposomes and niosomes can be expressed to prolong the existence of the drug in the systemic circulation, enhance penetration into targeted tissue and reduce toxicity, if selective uptake can be achieved 8.

Niosomes are unilamellar or multilamellar vesicles that are made up of non-ionic surfactant it can entrap amphiphilic and hydrophobic solutes. Stability is a prime concern in the development of any formulation. Liposomes have shown advantage as drug carriers, but they are associated with problems related to physical stability such as fusion, aggregation, sedimentation and leakage on storage 9, 13. The niosome approach minimizes these problems and they are more stable during sterilization and storage. Ease of transfer and good drug carrier make niosomes a versatile delivery system 10. The liposomes are very similar to conventional niosomes and more uniform in size.

In the present study, Ether Injection method was used for the preparation and optimisation of venlafaxine niosomes as this method is simple and easy to scale up 3, 4. The effects of wide range of surfactant loading on encapsulation of an amphiphilic drug in niosomes were also studied. Many others formulation variables such as surfactant to cholesterol ratio and amount of drug, also affect the characteristic of niosomes. The niosomes are thus of interest form a technical view and allow a wider scope to be used to study the influence of various formulation variables, niosomes need to be optimised for desired response.

Traditional experiments require more effort, time and materials when a complex formulation needs to be developed. Various experimental designs are useful in developing a formulation requiring less experimentation and providing estimates of the relative significance of different variables 5. In the work, a Box-Behnken design was used to optimize niosomes containing venlafaxine. Independent variable selected were Tween 80 (X1) surfactant loading (X2) and solvent (X3) to evaluate their separate and combined effects on vesicle size and poly- dispersity index expressed.

MATERIALS AND METHODS: Tween 80 and cholesterol were purchase from S.D. Fine Chemical (Mumbai, India). Chloroform, disodium hydrogen phosphate, potassium dihydrogen phosphate and sodium chloride were procured from Merck India Ltd. Venlafaxine was received as a gift sample from Ranbaxy Laboratories (Gurgaon, India). All chemicals used in the study were of analytical grade and used without further purification.

Box-Behnken Experimental Design: The traditional approach to developing a formulation is to change one variable at a time by this method it is difficult to develop an optimized formulation, as the method reveals nothing about the interactions among the variables. Hence a Box-Behnken statistical design with 3 factor, 3 levels and 17 runs was selected for the optimisation study. The experimental design consists of a set of points lying at the midpoint of each edge and the replicated centre point of the multidimensional cube. The independent and dependent variables are listed in (table 1). The Polynomial equation generated by this experimental design.

Method of Preparation: Niosomes were prepared by the ether injection method. For ease of preparation, precisely weighed amounts of surfactant, cholesterol and drug were taken in a clean and dry wide mouth beaker of 100ml capacity and chloroform (5 ml) was added to it. Venlafaxine (10mg) was dissolved in the lipid solution. The resulting solution was then taken in a syringe type of infusion pump and injected slowly into 30ml of aqueous phase (phosphate buffer pH 7.4) held in beaker maintained at 60oC to 65oC and agitated slowly. As the lipid solution was injected slowly into the aqueous phase, vaporization of chloroform resulting in the formulation of niosomes. The size and shape characteristics of niosomes were studied under a high power microscope 13.

Effect of Variables: To study the effect of variable on niosome performance and characteristic different batches were prepared using 3 factorial designs. Amount of Tween 80, chloroform and cholesterol were selected as independent variable. Amount of venlafaxine (10mg) were kept constant values all the variables and batch codes are shown in (table 1).

Transmission Electron Microscopy (TEM): Vesicle dispersion were characterised by transmission electron microscopy for vesicle formation and morphology. Samples of niosomal formulations were examined under optical microscope and photographed at a magnification of 100X, by means of a fitted camera. Negatively stained samples of niosomes were examined by transmission electron microscope at 70 kV. A saturated acetyluranil aqueous solution was used as the staining agent. Acetyluranil is a good general stain and fixative, particularly in membranes. Many fixative methods for TEM used acetyluranil as a stain to improve the appearance of structures by increasing their contrast 7. 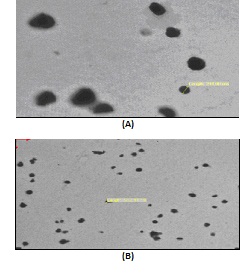 FIG. 1: (A), (B): TEM IMAGES OF OPTIMIZED NIOSOME FORMULATION

Entrapment Efficiency: Entrapment efficiency was determined by minicolumn centrifugation method. In brief, sephadex® G 50 solution (10% w/v) was prepared in water and kept side for 5 hrs for complete swelling. To prepare minicolumn, Whatman filter pad was inserted in 1 ml syringe and swollen sephadex was added carefully to it. To avoid air entrapment in column excessive amount of water was removed by spinning the column at 300 rpm for 3 min’s using centrifuge.

Venlafaxine niosomes suspension (100µl) were slowly added on prepared column and centrifuged at 500 rpm for 3 min’s, and then the same procedure was repeated by adding 100µl of water. The free drug bound to the suspension were collected from the first and second stage of centrifugation. Unentraped drug was removed through twice- thrice time washing by Centrifugation dispersion 16. The eluted niosomes were ruptured using an ethanol and percent encapsulation was calculated from total and of venlafaxine present in 100µl of niosomes. The method is validated using free drug instead of niosomal dispersion. The free drug was analyzed by UV- Visible spectrophotometer.

At each sampling interval, samples were withdrawn and were replaced by equal volumes of fresh receptor fluid on each occasion. Samples withdrawn were analyzed spectrophotometrically (shimadzu-1700) at 225nm.

Stability Studies: The ability of vesicles to retain the drug (i.e., drug retentive behaviour) was assessed by keeping the niosomal suspensions at two different temperature conditions. i.e. 4±2oC (refrigerator; RF), 25̊C±2oC (room temperature, RT), for a period of 30 days and these formulations were stored in aluminium foil-sealed glass vials. The samples were withdrawn periodically and analyzed for the drug content and particle size for niosomal suspension in manner described under particle size distribution and entrapment efficiency studies 2, 11, 12.

RESULT AND DISCUSSION: Amount of Tween 80, Cholesterol and Chloroform were found to be critical in preparation and stabilisation of niosomes and related as variable in the 32 factorial designs. Niosomes were prepared using ether injection method was found to be well suited for the production of niosomes without aggregation. Responses of different batch obtained using factorial design as shown in (Table 2). During niosome preparation for its best performance is the vesicle size and poly-dispersity index. It was observed that size and poly-dispersity index of niosome determines their ex-vivo performance.

Thus, for the effective delivery, the selected method should result in optimum size range and homogeneous formulation. In the present study, it was observed that the relative amount and surfactant, cholesterol and solvent were found to play an important role in vesicle size (fig. 1). Size of vesicles found to be in the range of 84 to 480 nm. To understand the effect of surfactant concentration on vesicle size, coefficient observed for niosome size fitted in equation and generated equation as given below,

Drug Content Uniformity and pH Measurement: There was no significant difference observed in the percentage (%) drug at various locations, indicating that the method used to disperse the niosomal dispersion is satisfactory. The pH of the developed formulations was near to the skin pH. We conclude that prepared niosomal dispersion was suitable.

The % drug deposited in the skin is 27.04 %, 42.08 % and 40.12 %. Result of this study clearly depicted that the amount of drug retained in skin and that was niosomal form could not only enhance the penetration molecules but also helped localize the drug in the skin. The latter was achieved in the presence of aqueous and non-aqueous phase of belayed systems, a state most ideally suited for drug penetration. Thus, the niosomal venlafaxine formulations, with desired characteristics for transdermal administration, could be successfully prepared. The formulated venlafaxine niosomes have shown an appreciably enhanced skin permeation as well as retention of drug molecules in the skin.

Stability Study: Stability of Niosome dispersion was carried out for 30 days at 4±2oC and room temperature. Response obtained for different parameters niosomal dispersion during stability period are as shown in (Table 2). Niosome were found to be reasonably stable in terms of aggregation, fusion and/or vesicle disruption tendencies, over the studied storage period, depicts the %EE and particle size from niosomes. Whereas depicts drug deposition from niosomal dispersion over the 30 days period, at different storage temperatures i.e. freeze temperature (FT) and room temperature (RT).

From the results, it can be concluded that at room temperature and freeze temperature, there was slightly but insignificantly increase in particle size. Result suggests that keeping the niosomal product in refrigeration conditions minimize stability problems of niosomes.

ACKNOWLEDGEMENT: We would like to thank Ranbaxy Laboratories (Gurgaon, India) for providing the gift sample of Venlafaxine HCl.