ABSTRACT: During the recent times, the whole world is conscious about the health hazards and toxicity associated with indiscriminate use of synthetic drugs. There is extensive surge of drugs which are safer and having fewer side effects. So there is a growing interest in natural remedies for the management of different ailments. Ayurveda describes different remedies prepared by using maximum percentage of therapeutically potent herbal ingredients. Dandruff is a common scalp disorder that even affects almost half of the population at the pre-pubertal age and of any gender or ethnicity. Description of lepa (preparation used for external application) is available in classical texts in the name of Amrabeejadilepa. Ingredients used for the preparation of this lepa are, Amarbeejamajja (seed kernel of Mangifera indica) and Haritakiphala majja (fruit pulp of Terminaliachubela). Lepa is applied along with milk over scalp 2 in severe dandruff. This promulgation has good anti-microbial, anti-oxidant and anti-inflammatory activity. The present work deals with the development of the amrabeejadi Anti-dandruff cream from amrabeejadilepa (Ayurvedic preparation). Amrabeejadi antidandruff cream was prepared with addition of glycerol mono stearate, glycerin, vitamin C and preservatives in various concentrations without altering the basic concepts of Ayurveda. This Ayurveda formulation has less patient compliance and shorter shelf-life, thus the present work is aimed to modify Ayurvediclepa (Paste) in to convenient dosage form i.e. cream which can be used easily and has longer shelf life with proper therapeutic potency.

INTRODUCTION: Dandruff is a common scalp disorder affecting large number of the population. It affects kids, teenagers and adults or we can say any age persons. It looks like small white or gray flakes that accumulate diffusely over the scalp

Symptoms of dandruff can differ in intensity, frequency, and duration amongst individuals. It is a chronic condition, and its symptoms can appear and disappear 1. The symptoms include itching and flaking of the skin of the scalp. These Symptoms often occur in people who have oily or greasy hair. Flakes of skin can be whitish or grayish and may become visible on the hair 2-3. There may also be redness of the scalp, hair loss, acne, pimples and recurrent infection of facial skin 4. For dandruff there are so many formulations mentioned in Ayurveda. Among them Amrabeejadilepa was selected for present study as it can cure the extensive form of dandruff i,e, darunadarunak roga 5.

But to practice and implement these ancient formulations in modern era is practically difficult as every individual’s life has become more complex and competitive in spite of scientific advances. So keeping this in mind an attempt was made to convert an Ayurvedic formulation into different form, so that this ancient medicine can fit well in this modern world. In the present study Amrabeejadilepa is modified and developed as Amrabeejadi antidandruff cream, which has comparatively more shelf life and better patient’s compliance.

Collection and Procurement and Authentication of raw drugs:

Amrabeejamajja(seed kernel of Mangifera indica) was collected from the local garden of Nanded, Maharastra and Haritaki (fruit pulp of Terminaliachubela) was procured from GMP certified K.L.E.S Ayurvedic Pharmacy Belgaum. Where as Glyceryl mono stearate, Methyl paraben, and Propyl paraben were purchased from LOBA Chemie Pvt. Ltd, Mumbai. Sodium benzoate and Ascorbic acid which were used were purchase from Reachem laboratory chemicals Pvt. Ltd, Chennai and Amulya milk powder of Amul Company was purchase from the local market of Belgaum. Authentication of raw materials was carried out in AYUSH approved drug testing laboratory, (CRL), KLEU Shri BMK Ayurved Mahavidhyalaya by the expert in the field.

Preparation of powder of Amrabeejamajja and Haritaki.

This was done by adopting impact process. Amrabeejamajja initially converted to coarse powder later made in to fine using mixer grinder and 180 number mesh. Haritaki powder was prepared in the same way. But this was sieved by 250 mesh size. Both powders were preserved in air tight bags.

Both powders were taken in equal quantity in a porcelain mortar and mixed homogeneously and preserved in air tight bag (Particle size of Raw materials and Lepa is shown in Table 9).

Cream was prepared by adopting mixing method. Ingredients use in different methods in different proportion were compiled in Table 13.

Milk was added to the Amrabeejadilepa and is stirred continuously till it became uniform; glyceryl mono stearate was added to boiled water and boiling continued till it dissolved completely. Then it was allowed to cool till its temperature reached to 400C. Both the mixtures were mixed and it was stirred continuously till its consistency became cream. The cream thus prepared was poured in two sterile containers. One was kept at room temperature and another was kept in the refrigerator.

Glycerol mono stearate was added to boiling water and stirred well till a homogenous solution was formed. After then Slurry of milk powder was added to warm homogenous solution and was stirred continuously. Amrabeejadilepa was then added to warm homogenous solution and was stirred continuously. It was allowed to cool till its temperature reached to 400C.This timeto this mixture methyl paraben sodium was mixed as preservative with constant stirring. When it showed signs of consistency of cream, it was transferred to two air tight containers.One was kept at room temperature and another was kept in the refrigerator. On observation it was found that sample kept at room temperature became little Dried, foul smelling and growth of fungus on 39th day while refrigerator sample became Dried, Spoiled and growth of fungus on 70th day.Based on this observation, to increase stability one more preservative ie propyl paraban and glycerine was planned to be added in next preparation.

It was observed that within5 week all four samples became spoiled, but sample B (fridge) showed only small amount of fungus on 40th day. For the fungal growth, sodium benzoate 0.1 % was added in the same sample B freeze bottle and keep outside at room temperature.  Till next 6 months no changes were seen, no foul smell appeared and no fungus grown except only little bit dryness. Thus it was planned to increase quantity of glycerin in next preparation.

During this method the amount of glycerin was increased but its consistency looked like paste instead of cream. So decision was taken to decrease the quantity of glyceryl mono stearate and Amrabeejadilepa in next preparation.

So all the ingredients were taken in specified proportion and amrabeejadi antidandruff cream was developed by adopting final procedure to get a smooth and non-gritty cream. Light brown colored along with fragment odour cream was prepared. .

RESULTS AND DISCUSSION: Dry Amrabeejmajja, haritaki and Amrabeejadi antidandruff cream was subjected to Microbial limit test and total microbial load for four different microorganisms’ viz. Escherichia coli, Staphylococcus aureus, Pseudomonas aeruginosa, and salmonella abony. It showed that there is no growth of these organisms after 24hrs of incubation as per IP (Results shown in Table 10).

Dandruff is very severe burden in community.  Though there are many formulations available in market but still there is necessity to develop some effective formulation. Amrabeejadilepa is one of the formulations which is indicated in severe Darunakaroga where the ingredients are easily available, and it is easy to develop also. With respect to shelf life and stability, Lepa has very shorter shelf life in comparison with cream as Lepa should be prepared freshly and then used; it gets deteriorated very easily by various environmental factors.

TABLE 13: PROPORTION OF INGREDIENTS USE IN DIFFERENT METHODS. 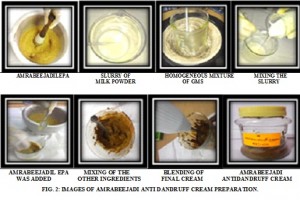 Powder was made to its fineness so that the lepa prepared should have a good cosmetic value. But here amrabeeja powder of more than 180 mesh size cannot be made possible due to its sticky nature. Repeated grinding and sieving is required for this. Thus the total quantity of powder obtained is much less due to loss during sieving. Haritaki powder of 250 mesh size is prepared, but there is also more loss during the process of grinding and sieving due to its fineness.

There is loss of weight during mixing of the two powders due to very fine particle size of haritaki powder. Time consumption was more in compare to general process, because of sticky nature of amrabeejamajja powder and spilling of haritaki.

Milk Powder is used in place of cow’s milk as the former increases the shelf life of the cream. It is here worth mentioning that the quantity of milk powder is calculated based on the fact that 1000 liter of milk yields 13 kg of milk powder and 50 gm. compound powder of amrabeejadilepa requires approx. 60 ml of cow’s milk. Thus approximately 8.05 gm. of milk powder is needed to prepare 100 gm. of cream.

GMS was used in this cream as a stabilizer, emulsifier and emollient. It also contains small amount of soap and other surfactant. Glycerin was used for its humectants and emollient properties. Methyl paraben was used in this case for its antimicrobial property. It is more active for Gram positive bacteria than Gram negative one. Propyl paraben is used in combination with methyl paraben for its antimicrobial activities; also it has a synergistic action with methyl paraben.  It is most effective in yeast and mould.

Vitamin C was naturally present in cow’s milk but as we have used milk powder in which Vit. C is absent. So Vit. C was mixed in the same proportion as it is present in cow’s milk. Simultaneously it also acts as an antioxidant which destroys free radicals both in the cream and the scalp. Due to this property it may also increases the shelf life of the cream.

Owing to its greater solubility here sodium benzoate is used in preference to benzoic acid. Sodium benzoate was used primarily as an antimicrobial preservative. It has both bacteriostatic and antifungal properties. Its preservative efficacy is best seen in acidic solutions (pH 2–5). In this case also the cream prepared is acidic with its pH in between 3-4.

Amrabeejadilepa was converted into Amrabeejadi antidandruff cream with the help of modern pharmaceutical technology, without altering basic concepts of Ayurveda. Analysis of Amrabeejadi antidandruff cream showed pH range 3-4, spreadability range 8.2-80.2gm-cm/sec, extrudability good and viscosity 32640cpc. This was found satisfactory with general characteristics of cream. Ayurvedic formulations can be modified with proper acceptability by increasing Shelf life and stability and also as per satisfaction of Physician, Pharmacist and consumer.

CONCLUSION: Amrabeejadilepa was converted into Amrabeejadi antidandruff cream with the help of modern pharmaceutical technology, without altering basic concepts of Ayurveda. Ayurvedic formulations can be modified with proper acceptability by increasing Shelf life and stability and also as per satisfaction of Physician, Pharmacist and consumer.