The present work attempted to identify and standardize the different phytochemical by modern analytical techniques and to summarize the UV, TLC, FTIR characters of the plants; Eugenia caryophyllus (clove), Acorus Calamus (vekhand), Myristica fragrans (Nutmeg) and Citrus aurantium(Orange peel) which ultimately results in compilation of analytical data for these crude drugs which are very much used in herbal cosmetics. The methanolic extracts of Clove, Acorus, Nutmeg, Orange peel were prepared by ultrasonic bath extraction method and labeled as DSC, DSA, DSN and DSO respectively for further studies. Preliminary pytochemical screening of extracts were also performed. Asarones were detected in Acorus extract by subjecting the TLC to UV light and observing blue fluorescence. Volatile oil was isolated from clove buds by using Clevenger’s apparatus which was subjected for the FTIR analysis, which indicates the peak for presence of phenol compound. For nutmeg and orange peel samples the presence of myristicine, elemicine in nutmeg extract was confirmed by Rf values.

INTRODUCTION: The present investigation deals with the studies of important techniques for identification of main phytochemical present in crude drugs which can be helpful in authenticating the plant material and also establish the data for quality control of crude drugs.

For present work we have selected four crude drugs which belong to the category of volatile oil 1 and which are regularly used in herbal cosmetic industry 2. This obtained data is compared with standard values or the data from the literature which gives the confirmation about the identified phytochemical. Clove oil 1 (Eugenia caryophyllus) contains Eugenol (Fig. 1) (70-90%) 3, eugenol acetate, caryophyllenes and small quantities of esters, ketones, and alcohols. Oil of clove4 is colorless to pale yellow in color.

It becomes thick and darker in color on storage. Traditionally clove is used as dental analgesic, carminative, stimulant, flavoring agent, an antiseptic 5, in the preparation of cigarettes. The oil is used in perfumery and also in the manufacture of vanillin.

Simpson et al performed the analytical study and revealed a plot from a GC/MS of the volatile oil (Fig. 3) from the nutmeg seed which is given below and the numbered peaks are identified as: 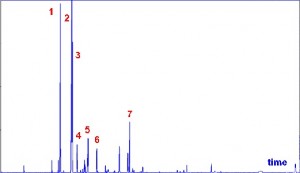 (2902) α-pinene MOL or MS; sabinene PDB or MS; (2903) β-pinene PDB or MS; myrcene PDB or MS; (2633) limonene MOL or MS; α-terpinene PDB; (2248) terpinen-4-ol PDB or MS among the major ingredients; others are α-phellandrene, p-cymene, linalool, and α-terpineol. A recent study on nutmeg oil from St Catherine, Jamaica and other West Indian nutmeg oils revealed that except p-cymene and α-terpineol the Jamaica nutmeg oil was found to contain all compounds in high concentration as compared to Grenada and Indonesian variety 10, 11.

The orange peel (Citrus aurantium) contains 2.5% of volatile oil; it also contains compounds like hesperidin, neohesperidin, iso-hseperidin, vitamin C and pectin9. The bitter substances are the glycosides aurantimarin and aurantimarin acid. Volatile oil contains 90% of limonene and small % of aldehyde, chiefly citral and citronellal. It is used in chemical synthesis as a precursor to carvone and as a solvent in cleaning products. Limonene causes sedation and peripheral analgesia. The hesperdin shows antioxidant effect according to in vitro studies 12.

Hesperidin reduced cholesterol 13 and blood pressure 14 in rats. In a mouse study, large doses of the glucoside hesperidin decreased bone density loss15 another animal study showed protective effects against sepsis 16. Identification of hesperidin was carried out on HPLC system by using the mobile phase consisted of a mixture of acetonitrile water and methanol (20:79, 6.0,4 V/V) 17 as depicted in fig. 4. 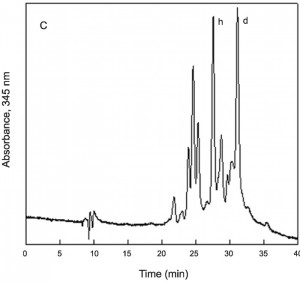 Preparation of extracts: For extraction 18 all crude drugs were pulverized using a mixer. The coarse powder (50 gm) was subjected to successive extraction with methanol (200 ml) by maceration in a conical flask with stopper and periodic ultrasonification. The marc obtained was further subjected to re-extraction using same solvent. All the extracts obtained were concentrated using laboratory grade hot plate and further subjected for the chromatographic and spectroscopic analysis. The clove oil was extracted from 100gm of clove bud powder and then the oil was packed in air-tight container for further study.

Presence of asarones in Acorus is confirmed by chromatography method.

Spectroscopic measurement 20: Accurately weighed quantity of drug extract 10 mg was dissolved in methanol by using volumetric flask and volume was adjusted to 10 ml by using solvent methanol so as to get 1000 ug/ml stock solution. Stock solution was further diluted to produce 10, 30, 60, 90, 120, ug/ml as final concentrations. For these dilutions absorbance was measured between 200 to 400 nm by using double beam Spectrophotometer, (Jasco: V-630) and reported here.

Chromatographic analysis 21: Silica gel slurry was prepared using water and slides were prepared by pouring the slurry on glass slides. These plates were kept in oven for 10 minute for activation. Saturated solution of drug extract was prepared in methanol. Developing chamber was kept ready with proposed solvent system for saturation 22. The spotting was done in such a way that approximately 1 mm-sized spot of the solution is seen.

The plate was kept slightly tilt in solvent system to run the solvent system 3/4th of the plate. The spots made visible by using iodine chamber and further photographs were recorded and Rf was calculated.

RESULTS AND DISCUSSION: Ultrasonic bath extraction was found to be most efficient way for getting maximum yield. All extracts (Fig. 5) were soluble in methanol, benzene and chloroform. The characterization of extract is depicted in Table 1.

TABLE.1: CHARACTERS OF ALL EXTRACTS AND OIL ALONG WITH % YIELD

Thin layer chromatography for each extract was carried out by using different solvent systems and developed the proper solvent system combination for exact visualization of spot (fig. 6 to fig. 9). The UV analysis of all crude drugs has shown different values of λmax which depicted in fig. 10.

The photographs of TLC and details of Rf, solvent system and their ratio is as depicted in Table 2 and name of the compound was found out as per detail literature survey. 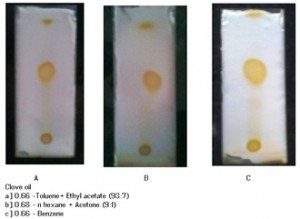 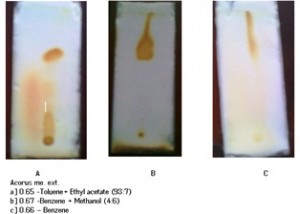 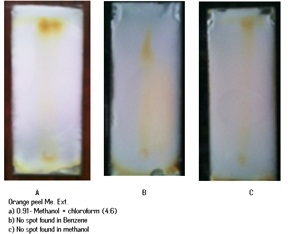 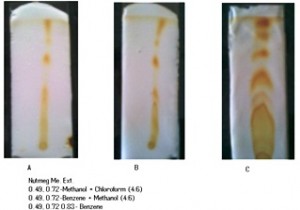 TABLE.2: TLC AND UV ANALYSIS OF ALL EXTRACTS AND OIL 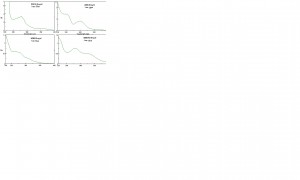 From above data one can confirm the presence of eugenol in clove by phytochemical analysis and chemical test which is further reconfirmed by λ max value, Rf value and FTIR.

Asarones show blue fluorescence by exposing TLC to UV light, as well as by phytochemical analysis which is reconfirmed by λ max value and Rf value. All extracts has given positive tests for presence of volatile oils and tannins.

CONCLUSION: In conclusion, the present study on clove, acorus, nutmeg and orange peel may be useful to supplement the analytical information with regard to their identification and can be useful as an authenticating parameter of standardization. In future we are planning to generate databank for a particular class of phytochemical which are currently used in herbal and cosmetic products.