DEVELOPMENT OF CHITOSAN CAPSULE FOR COLON SPECIFIC DELIVERY OF BUDESONIDE

DEVELOPMENT OF CHITOSAN CAPSULE FOR COLON SPECIFIC DELIVERY OF BUDESONIDE

ABSTRACT:The principal derivative of chitin is Chitosan, produced by alkaline deacetylation of chitin, is a non-toxic, biodegradable and biocompatible, cationic polymer. Chitosan has been widely used in the formulation of particulate drug delivery systems to achieve controlled drug delivery. The main objective of the study was to develop enteric coated Chitosan capsule containing budesonide for targeting the ileum and ascending colon sites which were mainly affected in Crohn’s disease. This work describes a new colonic drug delivery system utilizing capsule shells prepared from Chitosan. Coating of drug filled Chitosan capsule with pH dependent enteric polymer like Eudragit S100 / L100 (1:1) provides it a special feature of releasing drug at colonic pH. The in-vivo study involves the Gamma scintigraphic evaluation of enteric coated Chitosan capsule. The enteric coated Chitosan capsule proved to be efficient to deliver the drug at ileum and ascending colon in Crohn’s disease.

INTRODUCTION:Chitin is one of the most abundant organic materials, beings second only to cellulose in the amount produced annually by biosynthesis. It occurs in animals, particularly in crustacean, molluscs and insects, where it is a major constituent of the exoskeleton, and in certain fungi, where it is the principal fibrillar polymer in the cell wall. Chitin has a crystalline structure and it constitutes a network of organized fibers, this structure confers rigidity and resistance to organisms that contain it (Roberts 1992).

The principal derivative of chitin is Chitosan, produced by alkaline deacetylation of chitin. Chitosan also occurs naturally in some fungi but its occurrence is much less widespread than that of chitin. Chitosan is poly ß-(1, 4)-2-amino-2-deoxy-D glucopyranose 1.

Chitosan a deacetylation product of chitin is biodegradable and nontoxic. Chitosan forms acetate when dissolved in acetic acid. The acetate can be cast into a film, which is clear, flexible, tough and soluble in water.

Hence considering the filmogenic property of Chitosan; the objective was to prepare capsules of Chitosan and examine their suitability as an alternative to gelatin capsule shell 1-6.

In the present work, we have attempted to utilize Chitosan in the form of capsule shells; which were filled with budesonide coated sugar spheres and then the capsule is coated with enteric polymers, Eudragit L-100 and Eudragit S-100 in the 1:1 ratio. With this system we aimed to deliver drug at colonic site in a sustained release fashion. It was with the intention that the Carboxylic groups of Eudragit S/L 100 and amino groups of Chitosan could interact to form a complex through which drug would release slowly; the anionic enteric polymer combination was selected.

As soon as budesonide is absorbed into the body, the liver converts it into inactive chemicals. Therefore, for effective treatment of Crohn's disease, budesonide, like topical 5-ASA, must be brought into direct contact with the inflamed intestinal tissue. Hence, colon specific delivery of budesonide by using Chitosan capsule was proved to be beneficial in the treatment of Crohn’s disease.

The biodegradation of Chitosan by colonic bacteria and pH dependant release of drug from Chitosan capsule coated with Eudragit to achieve pH dependent dissolution and slow release of budesonide in time controlled manner may improve the site specificity of drug delivery system to the colon.

The integration of all release function into single drug delivery system will be better alternative to all other approaches which were used to deliver drug to the colon 9.

Materials: Budesonide was obtained from Cipla Ltd. Mumbai, India. Chitosan capsules and gelatin capsules were obtained from Aicello Chemical Company Ltd. (Toyohashi, Japan), and the mean diameters and weight of these capsules were 15.6 mm × 5.8 mm and about 60.0 mg, respectively. Eudragit S-100 and Eudragit L-100 was obtained from Evonik Degussa India Pvt. Ltd. Mumbai, while Ethyl cellulose, Polyvinyl Pyrrolidone (K-25), PEG 6000 & talcum powder were purchased from SD-Fine Chemicals Limited and Burgoyne India Ltd., respectively. The Nonpareils Seeds were of pharmaceutical grade and all other chemicals were of analytical grade.

Preparation of Budesonide Coated Sugar Pellets: The budesonide coated sugar pellets were prepared by using Instacoat coating instruments. The budesonide pellets are normally produced by stirring the active substance with a binder in an alcoholic liquid and spraying this suspension or solution onto so called starter pellets 12. These starter pellets can be any desired pharmaceutically utilizable neutral pellets such as sugar pellets. The nonpareil seeds of diameter 1.0 mm were used as core material.

Firstly, PVP K25 was dissolved in (9:1) water: ethanol mixture and components ethyl cellulose, micronized budesonide and talc were suspended in above mixture by using Ultra Turrax. The suspension was sprayed on to the rotating sugar pellets in a pan by using Instacoat coating machine. The inlet and outlet temperature, spray rate were controlled during coating. The budesonide coated sugar spheres are dried at room temperature 13. The core compositions for one capsule are reported 23-30 in Table 1.

The surface of filled Chitosan capsule was coated by using anionic enteric polymer coating. The Eudragit S100 and L100 in ratio of 1:1 was optimized and used for the enteric coating of Chitosan capsule 14. Eudragit S/L 100 as dry polymer substance PEG 6000 (plasticizer) 10% and Talc (glidant) 50% of dry polymer substance was dissolved in ethanol-water mixture. The Titanium dioxide was added as pigment in coating solution.

The preheated Chitosan capsule was coated by continuously spraying the above mentioned coating solution of 50oC. The total solid content for organic coating solution was 10 % and the coating should be done 4-6 mg/cm2 of capsule surface. All the parameters, inlet and outlet temperature, spray rate were controlled during coating. The coating operation was performed by using Instacoat 15.

The coated Chitosan capsules were checked for individual weights according to US/NF. The enteric coating compositions for Chitosan capsule are reported 23-30 in Table 2.

In the beginning the release of drug in Hydrochloric acid buffer pH 1.2 was studied for two hours (mean gastric emptying time). The dissolution medium was then replaced by Phosphate buffer pH 6.8 and drug release was studied for 2 hours.

Finally the dissolution medium was replaced by Acetate buffer pH 3.5 (Colonic environment) and release rate was studied until the end of experiment. The temperature of the medium is 37±0.5oC and the speed of the rotation of basket was 100 RPM. The 5 ml of aliquots were taken every 30 minute for first four hours & then after every 60 minutes up to the end of experiment.

The amount of budesonide released from the capsule was determined by spectrophotometrically by measuring absorbance at 248 nm. Systronic 2203 Double beam UV-Visible spectrophotometer was used for the measurement.

Subjects are also going to be informed that they are taking part in a research project and their clinical records may be seen by the regularity authority. The investigator will explain the participation to the study is entirely voluntary, and that the subject will retain the right to withdraw at any time without prejudice by simply informing the investigator.

Melting Point Determination:  The melting point of Budesonide was determined by using programmable melting point apparatus (Veego Scientific, Model: VMP-PM) and it was found to be 226.5oC.

IR Spectrum Interpretation: The IR spectrum of Budesonide is shown in Fig. 2.The interpretation of IR frequencies is done and shown in Table 3. From the IR Spectral data, functional group analysis, it can be concluded that given sample was the drug Budesonide 38. 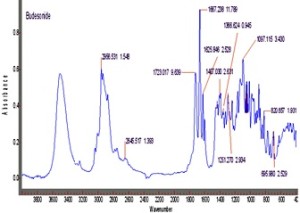 * Each sample was analyzed in triplicate (n=3)

In-vitro Drug Release Study: In the experiments comparing the in vitro release of drug from gelatin and Chitosan capsules, the release rate from Chitosan capsules was found slow and extended when the dissolution medium of colonic pH was used. In-vitro drug release from enteric coated Chitosan capsule was studied in three media of different pH, such as pH 1.2 HCl buffer, pH 6.8 phosphate buffers and pH 3.5 Acetate buffer. From the results, which clearly indicate that below the solubility pH of enteric polymer, no drug release occurred. 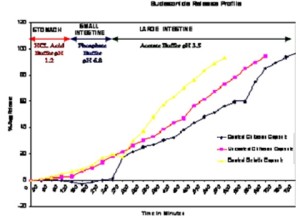 Moreover after several hours of dissolution study the enteric coated capsule does not dissolve completely but rather a fluffy complex of Eudragit and Chitosan was still observed. This observation justifies the slow release of drug from Eudragit coated capsule. As intended, to confirm whether a complex resulting from the interaction between amino group of Chitosan and carboxylic groups of Eudragit has been formed or not, the samples of Chitosan, Eudragit S100 / L100 (1:1) and Eudragit coated Chitosan capsule were analyzed by Infra-red spectroscopy.

Based on these observations, the possible mechanisms involved in the site specific delivery of the drug could be expected to be consisting of;

(3)   Mucoadhesion of Chitosan and;

The scheme of proposed mechanism of Colon specific delivery of Budesonide using Chitosan Capsule is depicted in Fig. 4. 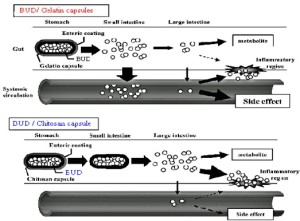 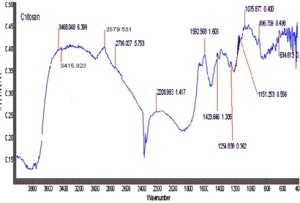 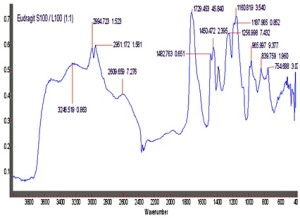 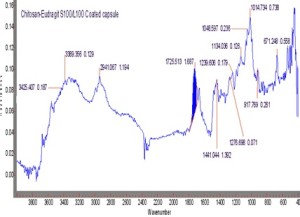 In addition, a significant band appeared at 1725 cm-1. This peak could be attributed to the formation of a carboxylate between the –COO­H groups of Eudragit and the –NH3+ groups of CS 44-45.

The broad O-H stretching is significant in Carboxylic acid of Eudragit, which was not seen in Eudragit coated Chitosan capsule spectrum, thus lack of an O-H group confirms the formation of Carboxylate anion (R-COO–). Consequently, it seems reasonable to conclude that Chitosan was ionically cross linked with the acrylic polymer. This is, to our knowledge, which reports an ionic cross linking process of cationic Chitosan due to its interaction with a pH sensitive anionic (acrylic) polymer 46.

Gamma Scintigraphic study-Gastrointestinal transit: The objective of the study was to assess the gastric emptying time and IC junction arrival time of budesonide containing Chitosan capsule. After gastric emptying, the 99mTc-labelled pellets spread along the small intestine. Later, the radioactivity became concentrated in the caecal region and ascending colon. It indicates that the radiolabelled pellets get concentrated at caecal region. The linear fit T ½ analysis was done. The tracer is seen in the stomach in the initial images and there is gradual emptying of the contents in the distal bowel over period of time. The tracer is seen at the IC junction between 4 and 5 hours 20-21.

From the scintigraphs taken at different time intervals, the mean gastric emptying time was found to be 1.14 h and the mean colonic arrival time was 4.27 h. Hence, the mean small intestinal transit time was found to be 1.68 h. The capsules entered the colon between 4.0 h and 4.38 h of administration in all the volunteers. This is in conformation with conducting the in vitro drug release studies in simulated gastric and intestinal fluids for 5 hour 22.

The gastrointestinal transit data, time and anatomical location of the complete disintegration of Chitosan capsule in the volunteers is shown in Table 5 and 6 respectively.

TABLE 6: TIME AND ANATOMICAL LOCATION OF THE COMPLETE DISINTEGRATION OF CHITOSAN CAPSULE IN THE VOLUNTEERS

The ability of the controlled-release formulation of budesonide to provide targeted deposition in the ileum and throughout the colon was tested under different conditions: in healthy controls with and without food. The gastric emptying curve is depicted in Fig. 8. 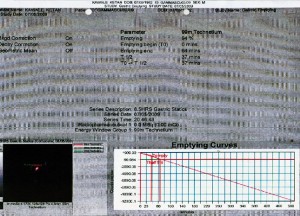 The characterization of budesonide was carried out by FTIR and UV spectroscopic techniques. From the IR data it was concluded that the drug was budesonide and the wavelength of maximum absorbance (λmax) was found to be 248 nm.

Moreover it results in complex formation of Eudragit and Chitosan through which the drug release could be sustained .Another important finding in this work is that, Chitosan can be used in the form of capsule shell for such work which is relatively simple and economic when compared with microspheres, microcores, and micro-encapsulation methods using Chitosan. Industrial scaling and batch to batch reproducibility of the proposed method would be comparably well.

In-vitro release study also suggests the extended release of drug over a long period of time due to complex formation between eudragit and Chitosan capsule. This complexation was proved by IR spectroscopy and SEM analysis.

Thus, Chitosan capsule may be prove to be a suitable alternative to traditionally used gelatin as a capsule shell material at least for delivery of certain classes of drugs.