ABSTRACT:In the present study,FDDS of Famotidine, a copmpetative inhibitor of histamine H2 receptors were prepared by using natural gums viz. xanthan gum and guar gum at different drug to gum ratio using sodium bicarbonate and citric acid as gas generating agents and lactose as diluent.FDDS tablets were prepared by wet granulation technique using PVP K30 as granulating agent. The prepared FDDS tablets were evaluated for its pre compression characteristics like bulk density, angle of repose, true density and compresibility index and post compression parameters such as hardness, friability, uniformity of drug content,  in  vitro floating studies, in vitro dissolution studies. The physical evaluation of all the formulations showed values within the prescribed limits for tests like hardness, friability and weight variation which indicate that the prepared tablets are of standard quality. The floating lag time of all the formulations was less than 10 minutes,All the formulations showed good matrix integrity and retarded the release of drug for 10 hours. Formulation X3 containg drug: xantahne gum ratio of 1:3 showed zero order kinetics, the IR spectroscopic studies indicated that the drug was compatible with the polymer and co-excipients and therefore can be a promising alternative to the existing dosage form.

INTRODUCTION:Peptic ulceration, gastroesophageal reflux disease, and hypersecretory conditions such as Zollinger–Ellison syndrome require reduction in gastric acid secretion and need constant monitoring. Famotidine is used as a potent inhibitor of gastric acid secretion acting as a competitive inhibitor at the H2 receptor on the parietal cell 1. In the management of benign gastric and duodenal ulceration, the dose of Famotidine is 40 mg daily by mouth at bed time, for 4 to 8 weeks. In gastroesophageal reflux disease, the recommended dose is 20 mg by mouth twice a daily for 6 to 12 weeks, where gastro esophagealreflux disease is associated with esophageal ulceration; the recommended dose is 40 mg twice daily for similar period. For symptomatic relief of heartburn or non-ulcer dyspepsia a dose of 10 mg up to twice daily is suggested.  In the Zollinger-Ellision syndrome the initial dose by mouth is 20mg every 6 hours, increased as necessary, dose upto 80 mg daily have been employed. The low bioavailability (40–45%) and short biological half life (2.5-4.0 hours) of famotidine following oral administration favors development of a sustained release formulation. The floating drug delivery systems can be retained in the stomach and assist in improving the oral sustained delivery of drugs that have an absorption window in a particular region of gastrointestinal tract. These systems help in continuously releasing the drug before it reaches the absorption window, thus ensuring optimal bioavailability 2.

Preparation of Floating tablets of Famotidine: Eight formulationswere developed using different ratios of drug and gums as shown in Table 1.The drug and gum was blended and granulated by using 1 % PVPK30 solutions. The wet mass was passed through sieve no. 10 and the granules were dried in a hot air oven at not more than 45°C until till constant weight was obtained (until dry).Dried granules were passed through sieve no. 12 lubricated with magnesium stearate,talc and compressed by using  10.0mm diameter, spherical tablet punches on a tablet compression machine3 (Rimek minipress machinery Co. Pvt. ltd., India) at the hardness of 5 to 6 kg/cm2. Eight formulations were prepared and coded them from X1 to X8.

In vitro buoyancy studies: In- vitro buoyancy studies were performed for all the eight formulations as per the method described by Rosa et al 9. Randomly selected tablets from each formulation were introduced in a 100ml beaker containing simulated gastric fluid, pH 1.2 as per USP. The time taken for the tablet to rise to the surface and float was taken as floating lag time (FLT). The time for which the dosage form constantly remained on the surface of medium was determined as the total floating time (TFT). The results were depicted in Table 3.

Drug Content Estimation: The drug content in each formulation was estimated by triturating 20 tablets. Powder equivalent to 10 mg of famotidine was added in 100ml of 0.1N HCl followed by stirring for 10 minutes. The stock solution was diluted suitably and the absorbance of resultant solution was measured at 265 nm by using Elico-UV-Visible Spectrophotometer (SL-159)  0.1N HCl was used as  blank 8.

In-Vitro Dissolution Studies: The release rate of famotidine from floating tablets was determined using USP dissolution apparatus II (Lab Hosp india). The dissolution test was performed using 900 ml of 0.1N hydrochloric acid, at 37 ± 0.5°C and 50 rpm. Aliquots 5ml was collected at predetermined time intervels and replenished with an equivalent volume of fresh medium. The samples were filtered through a 0.45 μm membrane filter and diluted suitably with 0.1N HCl and were analyzed using Elico UV/Visible spectrophotometer at 265 nm 10. The results are illustrated in Figure 1.

RESULTS AND DISCUSSION: The Pre compression parameters were in the prescribed range exhibiting good flow properties formulation containing drug and xanthan gum showed the angle of repose in the range of 16.75 to 22.76 where as formulations containing drug and guar gum showed 17.65 to 21.14 indicating both the compositions having acceptable flow properties. The other pre compression parameters such as bulk density, tapped density, Carr’s index were also within the prescribed range as indicated in Table 2.

Post compression characteristics such as hardness, friability, weight variation, drug content estimation, floating lag time, in vitro dissolution studies. The hardness and friability of the formulation was found to be in the range of 4±0.2 to 5±0.2 and 0.417 to 0.628 respectively indicating the sufficient strength of tablet to withstand wear and tear  during handling. Weight variation is an important evaluation parameter for tablets any deviation from the prescribed limits may adversely affect the content uniformity of the formulation the prepare formulations were evaluated for weight variation using eagle electronic balance and was found to be within the IP limits. 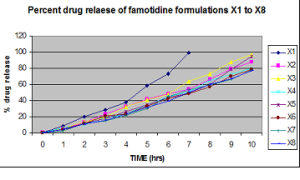 Among the various FDDS formulations studied, formulation X3 containing drug-gum ratio (1:3) prepared with XG (Xanthan Gum) showed promising results releasing ≈ 96.89%  of the drug in 10 hours  with a floating lag time of 1.48±0.098 min and floating time of 24 hours has been considered as an ideal formulation.

The IR spctra suggest that there was no polymer drug interaction the spectrum is depicted in Fig. 2.

CONCLUSION: Floating delivery systems are promising dosage forms which could be a better alternative to the conventional oral dosage froms in order to  improve bioavailability by increasing the gastric retention time of the drug. Natural polymers such as xantane gum and guar gum can be used to prepare floating drug delivery systems for drugs like famotidine which has higher absorption at low pH. However, this is to be explored by performing controlled in vivo studies.

ACKNOWLEDGEMENTS: Famotidine was obtained as a gift sample from Sreenivasa Pharmaceuticals Pvt. Ltd, Hyderabad, for providing the gift sample of  Famotidine.